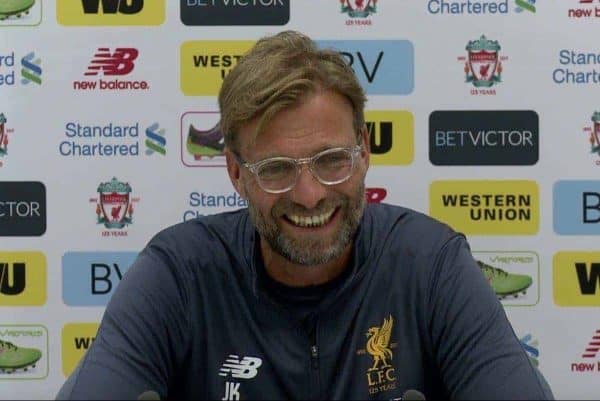 Fake news: How a joke Jurgen Klopp quote was used by national media

A number of newspapers were made to look foolish on Sunday, as a fake quote attributed to Jurgen Klopp was published online.

Klopp is known for his entertaining interviews and quotable comments, with his larger-than-life persona making him one of football’s most likeable characters.

It would appear a few have fallen foul of this over the weekend and gone full fake news on us.

With endless talk surrounding Philippe Coutinho‘s future, it has been no surprise to see the Liverpool manager bombarded with questions about his star man.

On Sunday, a spoof quote on Reddit, made by a poster called ‘sarkie’, went viral, with the prankster making up a quote from Klopp in an interview with ESPN’s Brazilian reporter Natalie Gedra.

The Reddit user joked that Klopp said: “I think tomorrow they will offer a McDonald’s Happy Meal and we get the toy as well!?”

You’d have to be pretty gullible to believe that Klopp actually said that, but it didn’t take long for all the ‘banter’ social media accounts to start passing it off as real, and before long the national media were too.

Incredibly, both the Express and Liverpool Echo actually published the quote, failing to source or check the quotes. Welcome to journalism in 2017.

So I made a joke comment on @reddit and @LivEchoLFC wrote an article about it as if it was real.

With the fake quote having since been pointed out, the Echo and several social media accounts have since removed it, but plenty haven’t – with the quote even picked up by Portuguese press.

This sums up some of the laziness that plagues journalism online, with the Express, in particular, succumbing more and more to click bait articles – they are even taking the opinions of ‘ITKs’ and using them as a source, which really is a desperate state of affairs.

As Donald would say, you are #fakenews.