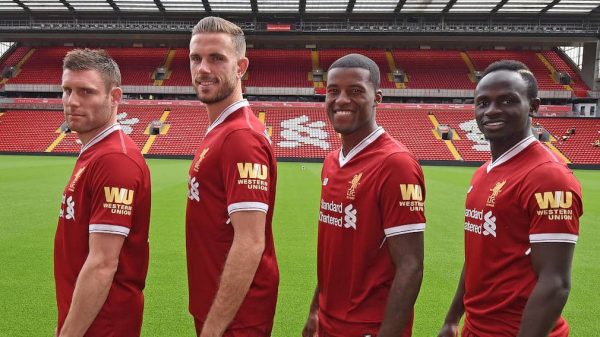 The Reds held a press conference at Melwood to unveil their latest sponsor, with Jurgen Klopp and CEO Peter Moore among those taking questions.

With Premier League clubs able to add sleeve sponsors to kits from the 2017/18 campaign, Liverpool have moved quickly to finalise theirs before the beginning of the season on Saturday.

Western Union, an American company specialising in global money transfers, will partner the club for the next five years.

The deal is reported to be worth £5 million a season, and therefore a total £25 million.

“In life it’s important to have the right partners,” Klopp told reporters at Melwood on Wednesday.

“It’s more proof we’re on the right way, and hopefully we’ll have success together.

“I’m excited about the start of the season, I’m not 100 percent here at the moment!

“I’m really happy, we need support from all over, from our supporters, our fans from all over the world, we felt it in pre-season.

“It was another proof for all the players, if you come to Liverpool, when you go to foreign countries you think ‘oh my god’. We need all the support [we can get].”

The sponsor will appear on the left sleeve, with the Premier League logo on the right sleeve.

A Western Union shirt-sleeve patch will be available free to all fans who have purchased an official 2017/18 shirt. If you really feel the need for that.

* You can purchase Liverpool’s new home, away and third kits from the official LFC online store here.