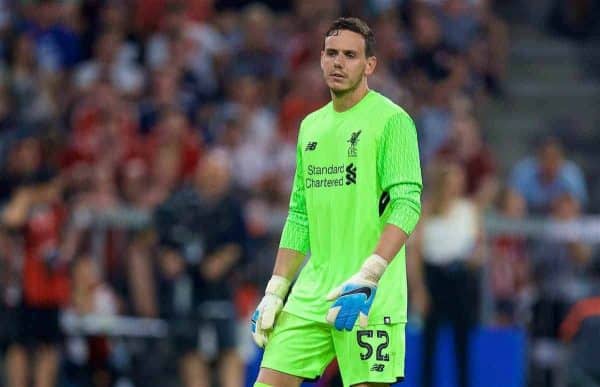 Ward made his first appearance of pre-season in the ‘final’ of the tournament at the Allianz Arena, and was in fine form between the sticks.

Particularly impressive was the Wales international’s reflex save to deny Angel Correa from point-blank range, turning the ball onto the bar, but Keidi Bare headed home the rebound.

Clearly undermined by a brittle defence ahead of him, Ward’s display in Munich was faultless, and presents a convincing argument as he battles for a starting role under Jurgen Klopp.

Assessing his recovery from a niggling back injury, and his night at the Allianz, Ward said he was “happy to finally be out there.”

“I think it went quite well,” he told LiverpoolFC.com, having made his first outing for the Reds since their 3-1 loss away to Swansea City in 2016.

“I’ve had a couple of knocks here and there through pre-season which has been frustrating, but I’m happy to finally be out there.

“They were just little knocks, ones that are really annoying.

“But at this part of the season it’s all about preparation and making sure you’re right so it was enjoyable.”

Having spent last season away on loan with Huddersfield Town, Ward could have returned this summer to find himself out of favour.

But with Klopp insisting Ward, Simon Mignolet and Loris Karius will all be fighting for the gloves in 2017/18, he certainly has a role to play.

And having travelled with the squad for their pre-season tours of Hong Kong and Germany, Ward has seemingly settled back in, both on and off the pitch.

“Here and Hong Kong have been massive for us fitness-wise and mentally as well,” he continued.

“The boys being around each other 24/7 is massive for team spirit, so I think we’ve all benefited from it.

“It’s been positive on both trips and hopefully we can take that on now.”

Whether that will be Ward is questionable, with Mignolet and Karius both in more favourable positions at this stage.

But back fit and shining against Atletico, the 24-year-old certainly has a case.