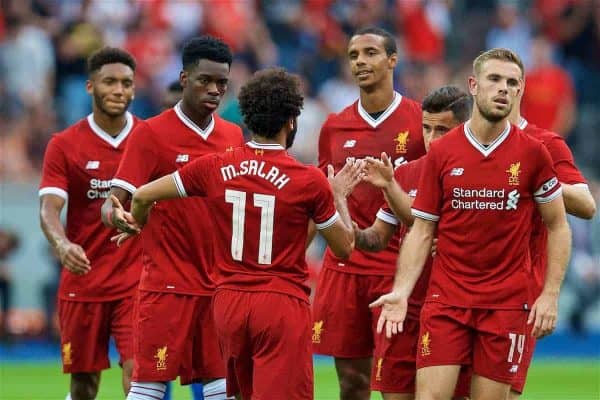 Another top-4 challenge? – How the national media are rating Liverpool’s chances in 2017/18

The new Premier League season is so close we can almost taste it, but are the national media tipping Liverpool to shine in 2017/18?

The Reds get their campaign underway on Saturday lunchtime, with Jurgen Klopp and his players taking on Watford at Vicarage Road.

It is the first game of what we hope will be a season littered with success, but are pundits and journalists tipping Liverpool to do well?

The Telegraph‘s Sam Wallace believes the Reds will finish fifth, with squad depth the main thing holding them back:

Not quite the strength in depth of others after some near misses in the transfer window. Lallana injury this month a reminder that they are susceptible when they lose key players. Will surely strengthen before close of window.

Andy Hunter of the Guardian is confident that Liverpool will continue to improve, but believes what happens between now and the end of the transfer window could prove key:

It is an infuriating trait of the Premier League era for Liverpool that a season of genuine progress often precedes a reversal but Jurgen Klopp is convinced the cycle will be broken.

The extra demands of Europe and a patient, high-risk transfer strategy that has yet to pay off provide counter arguments to the Liverpool manager’s belief. They should not distract from what is at Klopp’s disposal, however.

Consistency, he has insisted, will ensure Liverpool do not merely flirt with a title challenge this season. Many, though not all, of the pieces are in place.

Liverpool are blessed with pace, attacking prowess, stability and a balanced squad. Whether they will have the required quality in central midfield and defence, however, may rest on breaking the resolve of Southampton and RB Leipzig.

Writing for the Mirror, the always divisive Robbie Savage believes a repeat of last season is on the cards:

They were top of the league until December last year but failed the last the course after Sadio Mane went to the Africa Cup of Nations and a grim sequence of cup results in January undermined their confidence.

Can they go all the way this year? Not sure about that, but Mohamed Salah, Andrew Robertson and Dominic Solanke will strengthen Jurgen Klopp’s hand—and keeping hold of Philippe Coutinho will be key. 4th.

Another pundit who is often a figure of ridicule, Paul Merson, says Philippe Coutinho‘s future will be key to whether Liverpool finish ahead of Man United or not:

I’m going fourth now for United, but that could change by the end of the transfer window.

I say that because I think Philippe Coutinho leaves Liverpool. In football, if Real Madrid or Barcelona come in for you, you’re leaving. It’s very rare someone rejects them, and that’s my worry for Liverpool.

If Coutinho stays, I think Liverpool could finish above Manchester United, and they’re top four.

Strange summer for Liverpool and manager Jurgen Klopp—and at this stage it is a slight leap of faith to back him to deliver another top-four finish but he is moving his club in the right direction.

Mohamed Salah‘s arrival from Roma offers even more pace and movement to an attack rich in those qualities with the likes of Sadio Mane, Roberto Firmino and Philippe Coutinho.

Liverpool will watch developments on the south coast with interest to see if there is any way of reviving the fractious deal for Southampton‘s Virgil van Dijk to bolster a vulnerable defence and RB Leipzig midfielder Naby Keita remains on the radar.

The big question mark is the future of Coutinho. Klopp and Liverpool are understandably bullish about their refusal to sell—but Barcelona do not normally just walk away. The outcome will be crucial to Liverpool’s season.

Read where the This is Anfield writers predict Liverpool to finish here.