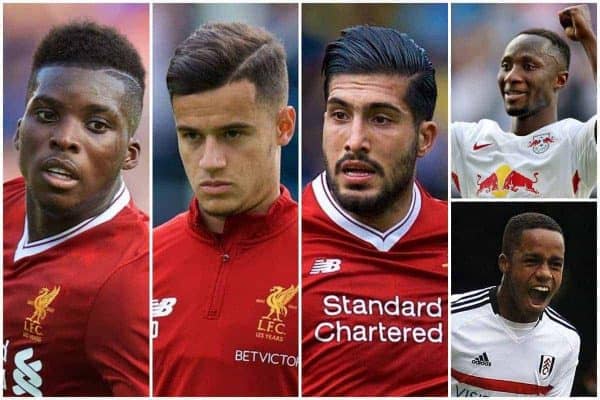 We round up Tuesday’s Liverpool transfer news and rumours, as the Premier League plans to vote on a major upheaval of the summer window.

The Reds take on Bundesliga side Hoffenheim in the first of two Champions League play-off clashes in midweek, pushing for a place in the group stage of Europe’s top tier.

Jurgen Klopp‘s 22-man squad for the trip to the Rhein-Neckar-Arena certainly left a lot to be desired, leading to calls for further reinforcement.

So what can we expect with just over two weeks left in the transfer window?

Speaking on the Reds’ arrival in Sinsheim on Monday, Klopp admitted “it would have helped” if the transfer window had closed before the start of the season.

The German may be granted his wish in a year’s time, with all 20 Premier League clubs set to vote on an early closure of the transfer window.

Reports from both the Times and the Telegraph on Monday night confirmed the proposal, with the latter relaying that “almost all of the 20 clubs [are] understood to be behind the idea.”

If this came into effect, this would begin ahead of 2018/19, though clubs would still be able to sell players to clubs around world.

Liverpool have been reluctant to part ways with too many of their young players on loan deals this summer, with only four leaving Merseyside so far.

Press Association Sport are among those to report that the 20-year-old has agreed terms with Championship side Fulham, and will spend the rest of the season at Craven Cottage.

Ojo is said to have turned down Derby County, Middlesbrough and Aston Villa, with a deal to be confirmed imminently.

Klopp Frustrated by Can Contract Talks

Fielded in Klopp’s starting lineup for Saturday’s 3-3 draw away to Watford, and included in the Reds’ squad at Hoffenheim, Emre Can is still yet to agree terms on a new contract.

The 23-year-old’s current deal expires in 2018, and Klopp has expressed frustration that no breakthrough has been made.

However, he stressed that he is still confident his compatriot will put pen to paper before next summer.

“The situation is not perfect, I would prefer that he has already signed,” he said, “but I am still positive we can find the right solution for both sides.”

On a more positive note, Gazzetta dello Sport claim that Juventus have opted to move for Paris Saint-Germain midfielder Blaise Matuidi, cooling their interest in Can.

Monday saw the Guardian report that Nice midfielder Jean Michael Seri has emerged on Klopp’s radar, as he looks to bolster his ranks in the middle of the park.

This is likely due to the Reds’ failure to sign RB Leipzig’s Naby Keita, with the Bundesliga side’s CEO, Ralf Rangnick, detailing their pursuit this week.

“There were two offers from Liverpool and in between times also a telephone call between the clubs, but not between me and Jurgen Klopp,” he explained.

“For us, it was always clear that we would not give Naby Keita. That is why there was no direct contact.”

He did, however, reveal that Leipzig were likely to part ways with the 22-year-old next summer.

With the transfer window set to close on August 31, Liverpool are still adamant Brazilian playmaker Philippe Coutinho won’t be sold this summer.

This is despite Barcelona’s interest in the No. 10, having seen their first two bids of £72 million and £90.4 million rejected already.

For Coutinho’s team-mate for club and country, Roberto Firmino, the 25-year-old’s departure would be “awful.”

“I prefer to not think of this because it’d be awful. He’s a great player but also a great friend to me,” he said on Monday.

“Coutinho is a craque (star player), it is normal that great teams are interested in his football. But my concentration is now on the team.”

Beyond Seri, two other midfielders have been mooted with moves to Anfield this week.

The 20-year-old has scored eight goals and laid on a further 13 assists in 32 games for the Super Lig side so far.

Meanwhile, World Football Index claim that the Reds enquired as to the availability of Mexican side Santos Laguna’s 20-year-old defensive midfielder Ulises Rivas, who is said to be valued at £5 million.

Finally, the Telegraph report that Tottenham have seen a £25 million bid for Fulham‘s teenager left-back Ryan Sessegnon turned down this week.

Sessegnon was on Liverpool’s radar before signing a new long-term contract with the Cottagers in June, with the Reds going on to sign Andrew Robertson.

Fulham are said to be adamant the 17-year-old won’t be sold this summer, and “seem willing to reject an extraordinary amount of money.”