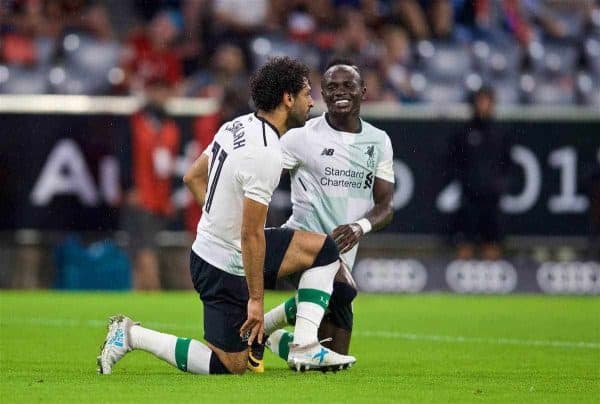 Jurgen Klopp‘s Liverpool sealed a 3-0 victory over Bundesliga champions Bayern Munich on Tuesday night, as their fine pre-season rolls on.

With Nathaniel Clyne sidelined for the rest of pre-season and Joe Gomez absent with a knee strain, Klopp turned to 18-year-old Trent Alexander-Arnold as his starting right-back.

Alexander-Arnold, despite making an impressive breakthrough at first-team level in 2016/17, is still largely untested in the role.

And coming up against 34-year-old ex-France international Franck Ribery, with the excellent David Alaba overlapping on the left flank, the West Derby native certainly had his work cut out for him.

Spending the first half prowling the same flank as Klopp, the teenager was urged on by his manager throughout, with the German prompting him when to push and when to drop.

Alexander-Arnold produced some well-timed tackles and impressive surges forward, but still looked at odds with the role at times—though he is certainly developing swiftly.

Moreno Makes a Shot at Redemption

A surprise choice to start ahead of Andrew Robertson, out-of-favour Alberto Moreno lined up at left-back at the Allianz, with James Milner still short of fitness after a thigh injury.

Moreno is widely reported to be set to depart Merseyside this summer, with Napoli having already seen an £11 million fall short of Liverpool’s valuation of the 25-year-old.

But if his performance on Tuesday night is to serve as a yardstick, Moreno is not resigned to leaving just yet, with the Spaniard mustering a fine display both in defence and attack.

Lining up opposite one of world football’s most intelligent players in Thomas Muller, Moreno read the game well and was firm in the challenge, while he retained his sharp attacking instincts moving forward.

It was Moreno’s overlapping run that led to Mohamed Salah‘s first-half strike, with the No. 18 drilling the ball into the six-yard area for his new team-mate to head home.

Whether Klopp is still planning for next season with Moreno in mind is questionable, but perhaps the arrival of further competition in Robertson could spur him on to a revival.

Tuesday provided Liverpool supporters with the first opportunity to see Klopp’s key wingers, Salah and Sadio Mane play together for the first time, and they certainly weren’t left disappointed.

Within seven minutes Mane had his name on the scoresheet, firing home on his left after a swift, impressive break involving some excellent holdup play from Roberto Firmino.

And just under half an hour later, Salah had matched his counterpart’s tally, nodding past Sven Ulreich at the far post following Moreno’s powerful cross.

With both Salah and Mane on the field, Philippe Coutinho was able to thread passes through at will, but more troubling for the Bayern defence was how Liverpool’s attacking talents interchanged.

At times, Salah was up front while Firmino shifted out wide, and when Mane was withdrawn at half-time Coutinho moved back out to the left, highlighting the Reds’ increasing flexibility.

Serbian midfielder Marko Grujic is something of a work in progress under Klopp, readjusting after a difficult first season on Merseyside, hampered by injury.

Having returned later than the majority of Klopp’s pre-season squad due to his commitments at the European U21 Championship, the 21-year-old has taken time to settle this summer.

And Klopp’s reservations over Grujic’s all-around game came to the fore when he discussed his lax attitude in the challenge in July, suggesting he was guilty of “switching off the machine.”

Two instances at the Allianz Arena highlighted Grujic’s potential as a roving, box-to-box midfielder and, in turn, his current deficiencies off the ball.

Latching onto Ryan Kent‘s excellent cross to drill home an ultimately overturned third goal, Grujic showcased his knack for arriving at the right place at the right time in attack.

But shortly after, Klopp was cajoling the No. 16 for not reading Coutinho’s pass as the Reds push forward, and it is clear Grujic needs to improve his focus in order to establish himself at Anfield.

Prior to the Reds’ 3-0 win, Napoli and Atletico played out a fierce semi-final in the blistering Munich heat, with goals from Fernando Torres and Luciano Vietto sealing a 2-1 win for the latter.

With Liverpool victorious later on, they will now take on Diego Simeone’s formidable Liga challengers in what proves to be a much different challenge than that of Bayern.

And the prospect of a reunion with Torres will be hugely interesting, as the ex-Red enjoys an Indian summer at the Vicente Calderon.

Torres left Merseyside in 2011, going on to play for Chelsea and AC Milan before rejoining Atletico in 2015, eventually repairing his bond with Reds supporters along the way.

Wednesday will provide a tough test for Klopp’s Liverpool, and they will be hoping Torres won’t return to haunt them at the Allianz.

It will be a further test for many of the fringe players, with Klopp set to rotate his starting lineup.