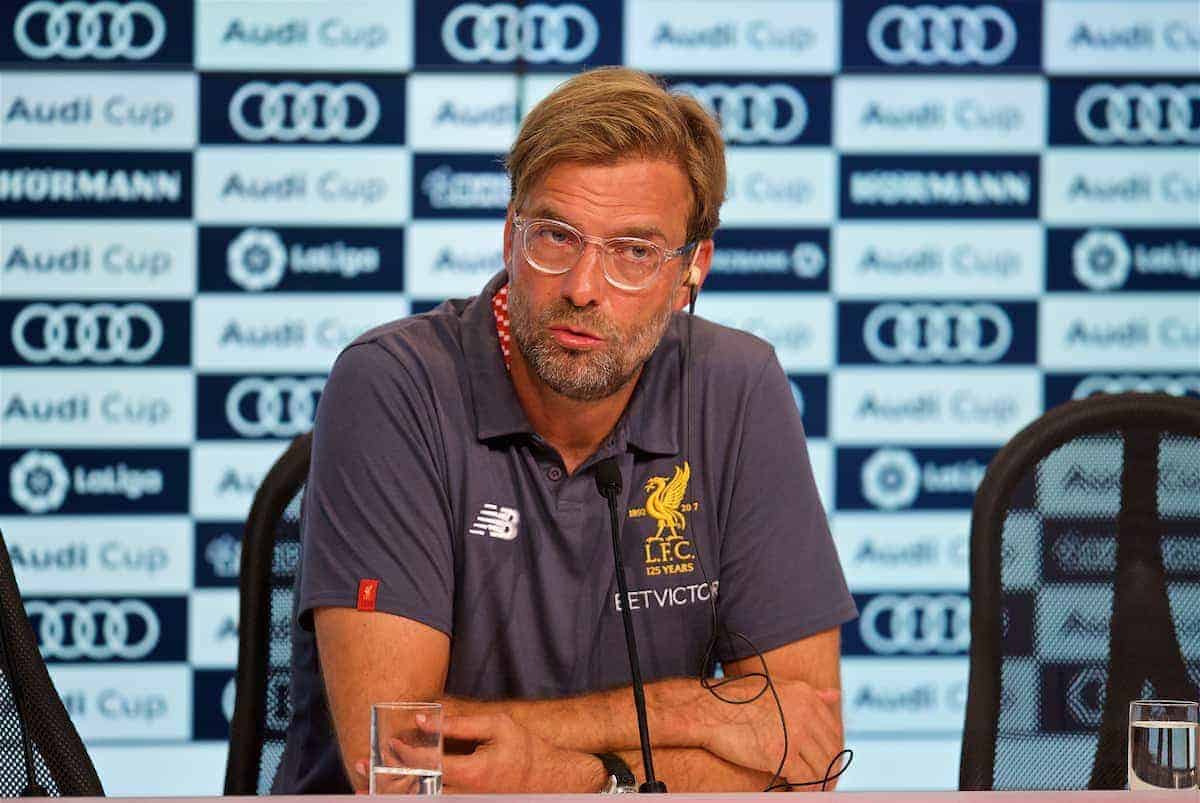 Liverpool play their last match of pre-season on Saturday evening, with Jurgen Klopp‘s side taking on Spanish side Athletic Bilbao in Dublin.

It has felt like a long summer, in many ways, with endless transfer talk and no international tournament often making the weeks drag.

For Liverpool, however, it has been a productive pre-season on the pitch, with five wins and two draws from their seven friendlies so far.

With their Premier League opener at Watford now just over a week away, Klopp has one more chance to fine-tune his team this weekend.

Bilbao should offer strong competition at the Aviva Stadium, in what is sure to be a great occasion in front of thousands of Liverpool fanatics.

A strong performance and no injuries would be the perfect day at the office.

News of Adam Lallana being ruled out for at least two months means the midfielder will miss this game. Jordan Henderson, Philippe Coutinho and Daniel Sturridge are also ruled out.

Nathaniel Clyne is definitely missing for the clash with the La Liga outfit, and is almost certain to miss the trip to Watford.

This means that Trent Alexander-Arnold will likely have a chance to show that he should start at right-back at Vicarage Road, while Joe Gomez could also stake a claim.

It is unsure who Klopp will go with in goal out of Simon Mignolet, Loris Karius and Danny Ward, but his choice on Saturday could be telling ahead of the Watford game.

Elsewhere, it would be a surprise if Liverpool weren’t at full strength, with the attacking trio of Sadio Mane, Mohamed Salah and Roberto Firmino all starting.

This is the first ever friendly to take place between Liverpool and Bilbao, but there have been four competitive meetings throughout history.

The pair met in a two-legged Fairs Cup first round tie back in 1968/69, and although it was drawn 3-3 on aggregate, Bilbao were eventually declared the victor by virtue of a coin toss.

Football in the old days was mad!

Liverpool get their revenge 15 years later, though, with Bob Paisley’s side progressing in the European Cup second round after a 1-0 aggregate triumph.

Ian Rush scored the only goal at San Mames, unsurprisingly, and the Merseysiders went on to lift the trophy for the fourth time, after beating Roma on the penalties in the final. This is potentially going to be a period of transition for Bilbao, with last season’s highly-rated manager Ernesto Valverde taking charge of Barcelona this summer.

His successor, Jose Angel Ziganda, has a job on his hands replicating Valverde’s seventh-place La Liga finish in 2017/18, but they are a club who continue to hold their own.

Aritz Aduriz is still showing no sign of slowing down at the age of 36, and the striker will aim to get somewhere close to last season’s tally of 24 goals.

Raul Garcia is another key man who once shone at Atletico Madrid, while Inaki Williams is a young forward of huge potential who has been linked with Liverpool in the past.

Aymeric Laporte is a centre-back of whom big things are expected, and Mikel San Jose is a name who might ring a bell, having spent three years on the Reds’ books between 2007 and 2010.

If the channel isn’t at your disposal, however, you can join us on our matchday live blog, with Henry Jackson talking you through the action from 4:30pm.