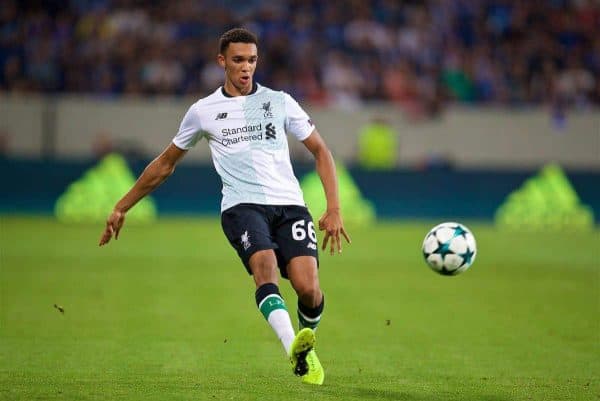 Following Trent Alexander-Arnold‘s landmark performance in Liverpool’s 2-1 win at Hoffeheim, Steven Gerrard was among those to praise his approach.

The 18-year-old scored his first goal for the Reds on his first appearance in Europe, bending a precise free-kick beyond Oliver Baumann to put his side 1-0 up in Sinsheim.

With Liverpool going on to victory in the first leg of their Champions League play-off against the Bundesliga outfit, Alexander-Arnold’s influence was key.

And this was discussed in the BT Sport studio after the game, with ex-Reds Steve McManaman and Dean Saunders joining Gerrard to analyse the academy graduate’s display.

“Special night, special performance, and the big thing for me is the manager’s got confidence in him,” Gerrard said.

“He threw him in at Old Trafford last season, six months ago: big arena, in front of 75,000 and he handled himself really well.

“So I’m sure he had no doubts putting him in tonight, it was a huge game, a tense game.

“But he’s an athlete, he can get up and down, he does all the basics very, very well, and this kid is obsessed with improving and getting better on a daily basis.”

Saunders praised Alexander-Arnold’s “self-belief,” while McManaman suggested his role in Hoffenheim’s late goal “might be the best thing for him.”

“He’ll learn a lot from tonight’s performance. He’s been punished for [his mistake],” the former No. 7 said.

“If he gets away with it at U23 level, he won’t learn. He’ll learn a lot from tonight’s performance.”

Alexander-Arnold is likely to keep his place for Saturday’s visit of Crystal Palace in the Premier League, and on the basis on his display in midweek, he deserves to.