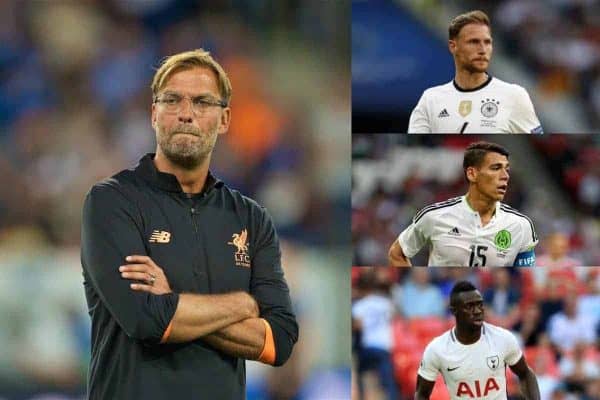 5 centre-backs that would have made Liverpool stronger

Jurgen Klopp challenged people to name five centre backs that would have made Liverpool stronger in the summer, we provide five names other than Virgil van Dijk.

Speaking towards the end of the transfer window, Klopp insisted that there were few options available that would improve on his current first-choice pairing of Joel Matip and Dejan Lovren.

“Look out there and tell me five that would make us stronger, five. Then you win a prize! It’s difficult how it is,” he said.

With Lovren continuing to struggle for consistency, his April suggestion that the Croatian would have been on his radar “if he played for a different club” is laughable.

And with Joe Gomez now settling into a role as right-back, rather than centre-back, Klopp’s assertion has been undermined after seven games.

So were there really no centre-backs on the market beyond Van Dijk? Here’s five.

Howedes emerged on the Reds’ radar towards the end of the summer transfer window, with the German agitating for a move from Schalke having fallen out of favour with new manager Domenico Tedesco.

It was claimed that the 29-year-old would have been available for around £18 million which, in the current market, represented good value for a proven top-flight centre-back.

However, he ultimately joined Juventus on loan with an option to buy, with the Serie A side negotiating a deal that could see Howedes join permanently next summer.

For Juventus this serves as a win-win situation, with Howedes arriving to bolster Massimiliano Allegri’s centre-back ranks following Leonardo Bonucci’s departure and, potentially, providing a solution for the longer term.

A 44-time international, capable of operating in the left-sided centre-back role and with vast experience operating alongside Matip, Howedes would have been an ideal signing for Liverpool.

Tottenham‘s late push to sign Sanchez from Ajax came as something of a surprise, given Toby Alderweireld and Jan Vertonghen are established as arguably the Premier League‘s best centre-back pairing.

But Mauricio Pochettino is clearly planning for the future, and Spurs moved swiftly, and with little fuss, to secure a £42 million deal for the 21-year-old Colombian.

Sanchez possesses more than sheer power, with an intelligence and composure on the ball, as well as an adventurous, progressive spirit, complementing his pure ability at the back.

Though his career is in its infancy, it would be no surprise to see Sanchez step into a more prominent role under Pochettino as the season goes on, and his world-class potential will be the envy of the Premier League.

While Howedes would have served as more of a stop-gap signing with a view to renewing the pursuit of Van Dijk in January, or the summer, Sanchez could have been a genuine alternative.

Moreno is perhaps most notorious in England for inflicting a shocking, leg-breaking challenge on Man United left-back Luke Shaw in the Champions League in 2015.

But the 29-year-old has quietly established himself as one of the most dependable, under-the-radar centre-backs in Europe since leaving Mexican side UNAM a decade ago.

Over spells with AZ Alkmaar and PSV Eindhoven in the Eredivisie, and Espanyol in La Liga, Moreno has showcased his ability as an exemplary modern centre-back: solid at the back, adept on the ball.

And with Antonio Rudiger leaving for Chelsea in the summer, AS Roma moved early to sign Moreno as his replacement, agreeing a deal with PSV worth just £5.3 million.

Though he is not at the level of Van Dijk, Moreno is an improvement on Lovren, as arguably would Simon Kjaer, Medhi Benatia and Mateo Musacchio, who also moved in the summer.

Moving onto players who did not leave their current clubs in the summer window, Lazio centre-back De Vrij was another touted with a switch to Anfield.

Van Dijk’s Netherlands team-mate has just one year left on his contract with the Italian outfit, and would be a bargain signing for a host of top-level clubs.

After a shaky start in Rome, De Vrij has established himself as one of the standout defenders in Serie A, utilising his intelligence, strong reading of the game and tactical flexibility to thrive.

Less physically imposing than Van Dijk, De Vrij has adapted his game to remain a step ahead of opposing forwards, as well as providing a platform to build from the back.

Though he is right-footed, the 25-year-old has experience on the left side of the centre-back pairing, and is also comfortable in a back three, providing Klopp with a host of options.

Such was Klopp’s level of interest in Van Dijk that Liverpool were willing to break their transfer record by a considerable amount, with a £75 million bid mooted.

This suggests that, if the players are available, Fenway Sports Group are capable of competing with their rivals for top-level talent.

With this in mind, the endurance of Laporte at Athletic Bilbao, despite sustained and widespread interest from the likes of Barcelona, Real Madrid and the Manchester clubs, is certainly interesting.

Laporte is a student of the game, aware that defenders need to balance strength with finesse, and composure with a front-footed approach, and at 23 has already played 199 times in La Liga.

It remains to be seen whether Laporte could be prised from the Basque Country, but if he could, he would be a sensational signing for Liverpool—as an alternative, or even partner, to Van Dijk.

Given Klopp was dead set on signing Van Dijk, settling on Matip, Lovren, Gomez and Ragnar Klavan as his centre-back options otherwise, Liverpool identifying alternatives may have been futile.

But with clear issues at the back spilling over from last season into the current campaign, this clearly required addressing.

It may be that, unable to sign Van Dijk, strengthening Klopp’s options at the base of the midfield would have given Matip and Lovren the protection they require.

The likes of Gary Medel, Maxime Gonalons, Leandro Paredes, Lucas Biglia and Sven Bender all moved for under £20 million in the summer.

Perhaps providing Jordan Henderson and Emre Can with further competition in the form of a specialist defensive midfielder would have been the Van Dijk alternative Klopp sorely needed.