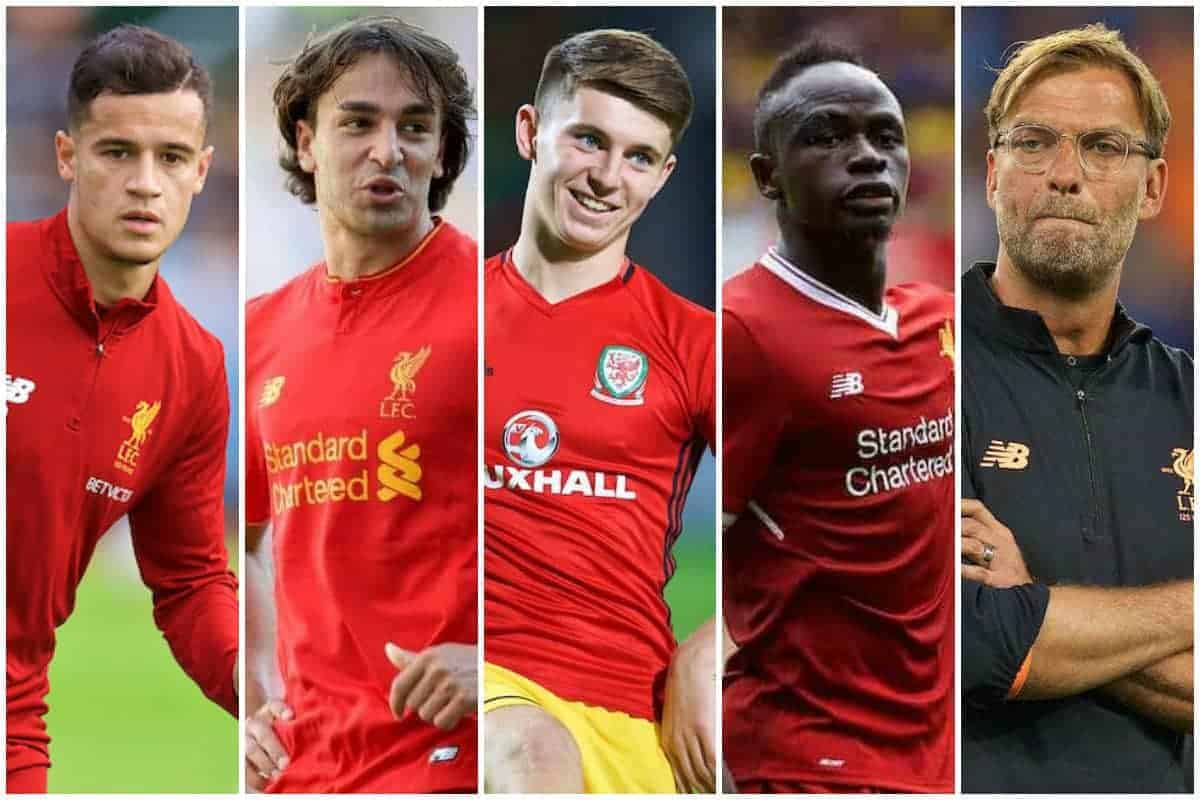 We round up the latest Liverpool news, as Jurgen Klopp‘s side continue preparations for Saturday’s Premier League clash with Man City.

The Reds have made their way back to Melwood after a positive international break, setting their sights on a winning return to domestic action.

Taking on Pep Guardiola’s Premier League hopefuls will be a tough task, but after a 4-0 win over Arsenal last time out, Klopp’s side can be confident of another victory.

Here’s the latest news from Merseyside, including an encouraging training return.

After a lengthy flirtation with Barcelona that saw Liverpool reject three bids from the Spanish giants, Philippe Coutinho ended the transfer window still on the books at Anfield.

Having miraculously recovered from a back injury to play and score for Brazil in the international break, the midfielder boarded a private jet back to Merseyside.

And as the Reds gear up for one of their biggest games in the first months of the season, Coutinho join full training at Melwood.

The 25-year-old was all smiles alongside Alberto Moreno, as he took part alongside a host of other players returning from duty with their respective nations.

Roberto Firmino, Mohamed Salah and Emre Can were among those to also report back to training on Thursday. Less than a week after the end of the transfer window in England, all 20 Premier League clubs met to discuss an early summer closure in future seasons.

Fourteen sides voted in favour, with five voting against and one abstaining, ensuring the window will now close before the start of the season, beginning in 2018/19.

Liverpool were among those to push for the motion, along with Tottenham, Chelsea and Arsenal, while both Man City and Man United were against it.

This will only affect incomings, however, with clubs around the world still able to sign players from the Premier League until the end of their respective windows.

It remains to be seen if this will ultimately benefit the English top flight, particularly with the World Cup held next summer.

Ben Woodburn arguably had the best international break of any of Klopp’s players, scoring the winner on his debut for Wales against Austria and assisting in their 2-0 win over Moldova.

The 17-year-old’s breakthrough under Chris Coleman follows an impressive start to life in the Liverpool first-team setup, where he has currently made nine appearances.

With the youngster developing rapidly, and gaining considerable attention from outside Merseyside, the Reds are moving swiftly to secure his future.

According to widespread reports, including the Telegraph, Liverpool will hand Woodburn a new long-term, £25,000-a-week contract on his 18th birthday, on October 15.

His current deal expires in 2019, but his new contract is expected to be for at least five years.

Markovic ‘Ready to Return’ to Fenerbahce

Having been included in Klopp’s 25-man squad for the Premier League campaign, Lazar Markovic made a surprise return to first-team training this week.

The Serbian has spent the past two seasons away from Anfield on loan, and looked set to leave the club, either temporarily or permanently, once again this summer.

But despite interest from Watford, among many others, the 23-year-old remains on Merseyside, and may play a part in the Reds’ 2017/18 season.

However, according to Turkish outlet Fanatik, Markovic could still join side Fenerbahce on loan, with the player “ready to return” to Istanbul.

The Super Lig’s transfer window does not close until midnight on Friday, and it could be that the winger seals an exit before Liverpool’s trip to the Etihad Stadium.

Sadio Mane made his way back to England this week after an impressive end to the international break, scoring and assisting in Senegal’s 2-2 draw with Burkina Faso on Tuesday.

But the winger will be forced to replay one of his side’s previous World Cup qualifiers, after Ghanaian referee Joseph Lamptey was banned for life by FIFA.

Lamptey took charge of South Africa’s 2-1 win over Senegal in November of last year, and the two sides will now contest the clash again, a year later.

The Lions of Teranga are now pencilled in to play Ephraim Mashaba’s side twice in the November international break, first on November 6 in Senegal, before the replay in South Africa on November 12.

The 17-year-old is currently captain of the Eagles’ U18s side, and can play on the flanks or as a central attacking midfielder, with both England and Nigeria monitoring his progress.

Any move will have to wait, however, as Liverpool are currently banned from signing domestic-based academy players until next summer.