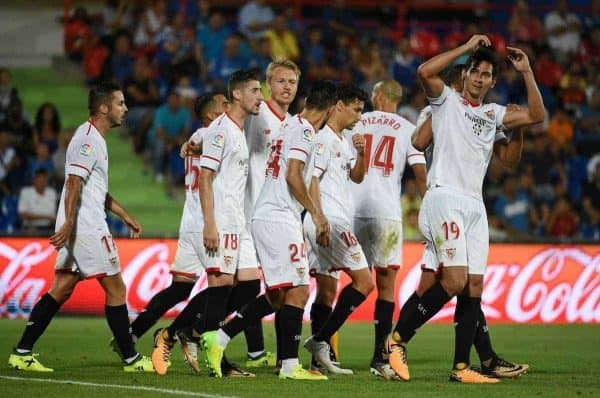 Ganso’s revival, a threat from out wide and post-Monchi transfers: The lowdown on Sevilla

Liverpool face Sevilla on match day 1 in the Champions League, but what can be expected from a changed outfit since the 2016 Europa League final?

Jurgen Klopp almost won his first piece of silverware against the Andalucian side in 15/16, only for Sevilla to come from behind and retain their title in Basel.

Fast forward to the Group E opener on Wednesday and the Reds will be hoping to exact a measure of revenge as well as take a big early step toward improving on their last Champions League outing and actually reaching the knock-out stage.

But if that defeat in a European final is no longer relevant for Liverpool, is the victory for Sevilla? Or indeed the fact they won three in a row? This is a different team, under new leadership throughout the club, but the Reds still face a tremendously tough game under the lights at Anfield.

As has often been the case for Sevilla, coming and goings in the transfer market have led to a rotating cast of stars and support acts this term.

Of the starting XI in the final just 16 months ago, six have moved on—Mariano, Adil Rami, Grzegorz Krychowiak, Coke, Vitolo and Kevin Gameiro—four remain—Daniel Carrico, Sergio Escudero, Steve N’Zonzi, David Soria—and one, Ever Banega, has both left and rejoined after a year at Inter Milan.

Of the seven subs, only Nico Pareja and Sergio Rico remain Sevilla players.

Including Banega’s return, Sevilla signed nine players this summer, among them the familiar faces to English football fans of Nolito and Jesus Navas.

They also signed at least two reported former Liverpool targets in Luis Muriel and Simon Kjaer, while Johannes Geis was on the wishlist of many Reds fans, if not actually the Reds themselves.

Why such a heavy turnover of a successful squad?

Two reasons: firstly it has always been the strategy to continually renew, selling players for vast profit (such as Vitolo this summer, to Atletico Madrid for around €35 million) and rebuilding the squad to remain comeptitive.

Secondly, there have been key changes in the hierarchy, with sporting director Monchi no longer at the club and last season’s charismatic manager, Jorge Sampaoli, having departed to take over the Argentina national team.

Not all the new faces will be involved at Anfield, with Nolito among those missing out through injury.

Sampaoli and his high-intensity style is out at the Sanchez Pizjuan, Eduardo Berizzo is in.

The former centre-back enjoyed an impressive three-year stint at Celta Vigo, taking them to the Copa del Rey and Europa League semi-finals last season and building a team which played attractive football.

After taking over from Sampaoli he hasn’t just had to deal with a swarm of transfer ins and outs, but also produce a more structured type of game to fit his own style and decide who would fill key spots in the team.

The first three games of the new La Liga season have seen Sevilla play 4-3-3, with Steve N’Zonzi the first-choice holder and a rotating cast ahead of him. Nolito and Navas have been the wide men of choice, while both Muriel and Wissam Ben Yedder have started as the No. 9.

In the season opener they still looked disjointed and open at the back, gifting possession to Espanyol a number of times, but since then have recorded back-to-back clean sheets against Getafe and Eibar.

It’s not the most testing of fixture sequences, and Liverpool will aim to be far more threatening than those three sides if they want to inflict a first competitive defeat on Berizzo in his new job.

Banega could start, but his involvement thus far has been minimal after an opening day red card, shortly after coming on as substitute.

It’s more likely that Ganso will continue his rejuvenation, then, as the team’s schemer from the centre.

Ganso: No La Liga player has won possession in the midfield third more times than Ganso (16) this season pic.twitter.com/bU9bS3FQGW

Formerly one of those “next Brazilian greats” we often see so much of in the gossip columns, Ganso never actually made the move to Europe until last summer—and he played less than 500 minutes in La Liga in 16/17.

Already he’s made more of an impression this year though, playing with confidence at the heart of Berizzo’s team and mixing his passing range with a greater emphasis on pushing forward to the edge of the penalty area.

He scored from such a run at the weekend, already his second goal of the campaign, and his languid runs shouldn’t be ignored as non-threatening. He has the physique to trouble the likes of Jordan Henderson and his technique has rarely been questioned.

This year could be Ganso’s kick-start, but regardless, he’s certainly in good form coming into the match at Anfield.

Nolito and Navas have started wide, but the left-sided option of the two is out.

That could mean either Pablo Sarabia shifts across from the centre, or Joaquin Correa comes into the lineup, though he hasn’t been heavily used thus far since the Champions League qualifiers.

Either way, it’s the threat of runners behind Liverpool’s full-backs where attention must be paid.

All three options want to get on the ball facing goal, and two of them—not Sarabia as much, who relies on a first touch and inventiveness in his game—have tremendous pace.

Clever passes between centre-back and full-back are the hallmark of Sevilla’s midfielders, and the in-from-out runs that the wide forwards make will exploit those gaps in the same way as Reds duo Sadio Mane and Mohamed Salah attempt to.

He and Gabi Mercado have rotated in the position so far, but while Mercado is a solid, uncompromising and versatile performer across the back line, Corchia has long been an underrated name around Europe who is quick to attack and comfortable on the ball.

Corchia, and Escudero on the opposite flank, will happily overlap, look to play short balls into the box and support more sustained build-up play whenever possible.

It would be a positive from a defensive point of view for Liverpool if Mercado were selected to start, and that might not be out of the question if Sevilla, as the away side, want to be a little more secure.

Corchia only made a brief appearance off the bench at the weekend though, and quickly claimed an assist for the third Sevilla goal.

He’s a real danger man with his driving surges from deep on the wing and the Reds must be alert for that threat in behind Alberto Moreno if he’s caught upfield on a counter.