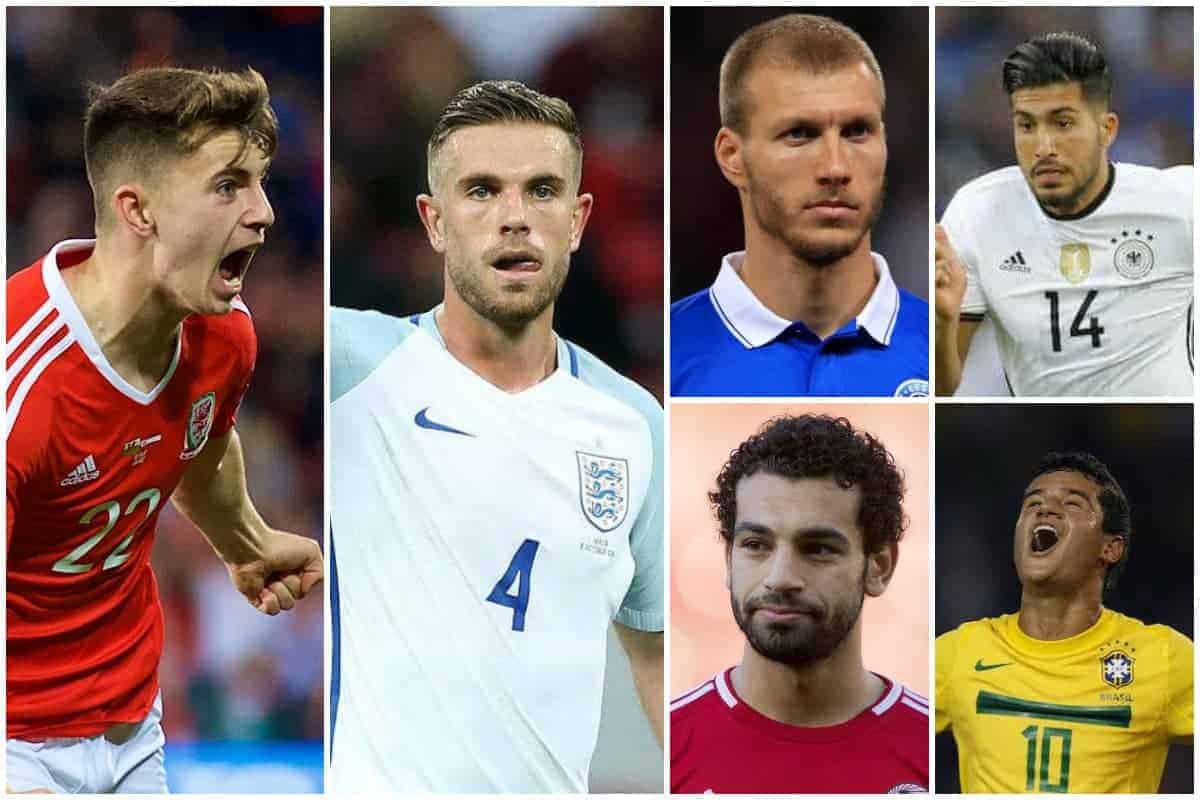 We round up how Jurgen Klopp‘s Liverpool players fared in the first round of World Cup qualifiers in the September international break.

The Reds parted ways following their emphatic 4-0 win at home to Arsenal last Sunday, unbeaten in all competitions in an excellent start to the season.

Klopp remained on Merseyside, as he and his backroom staff looked to complete a flurry of late deals that ultimately saw only one of three targets arrive to bolster the German’s squad.

Meanwhile, 15 Liverpool players were in action for their respective nations, as next summer’s World Cup in Russia takes shape.

Jordan Henderson captained England to a 4-0 win away to Malta, playing the full 90 minutes alongside Jake Livermore at the base of Gareth Southgate’s midfield.

He was joined by Alex Oxlade-Chamberlain, making his first appearance since leaving Arsenal in a £35 million deal, with the 24-year-old playing 76 minutes on the right flank.

There was controversy as Philippe Coutinho took to the field to replace Renato Augusto just before the hour mark in Brazil’s 2-0 win over Ecuador.

The 25-year-old had missed Liverpool’s first five games of the season with an alleged back injury, as he pushed for a move to Barcelona.

But Coutinho looked in perfect health as he exchanged passes with Gabriel Jesus before firing home Brazil’s second goal of the night, with Roberto Firmino watching on from the bench.

Both Simon Mignolet and Divock Origi were unused in Belgium’s 9-0 win at home to Gibraltar, but elsewhere in Group H, Ragnar Klavan captained Estonia to a 0-0 draw with Greece.

The centre-back played the full 90 minutes in Piraeus, picking up a yellow card as he sealed a vital clean sheet.

Andrew Robertson was among four Liverpool players to score for their nations in the first round of qualifiers, curling a lovely effort into the top corner as Scotland beat Lithuania 3-0.

Set to arrive in 2018, new signing Naby Keita was also on the scoresheet as Guinea beat Libya 3-2, driving through the Cranes’ defence before firing home a stunning goal.

The 22-year-old did, however, miss a penalty in his home city of Conakry, but Lappe Bangoura’s side were able to hold on for the victory.

Most impressive, however, was Ben Woodburn‘s cameo in Wales’ 1-0 win over Austria on Saturday night.

The young forward took Tom Lawrence’s place on the field on 68 minutes, and within 261 seconds had fired beyond Heinz Lindner with a sensational effort to secure a vital win.

On his international debut, Woodburn became the second-youngest player to score for Wales, behind only Gareth Bale.

Both Mohamed Salah and Sadio Mane played the full 90 minutes for Egypt and Senegal respectively, but were unable to inspire victories.

Salah’s side lost 1-0 to Uganda, while Mane was left frustrated as the Lions of Teranga were held to a 0-0 draw by Burkina Faso in Dakar.

Back in Europe, Emre Can played 11 minutes in Germany’s 2-1 win away to the Czech Republic, replacing goalscorer Timo Werner shortly after Vladimir Darida had levelled.

Dejan Lovren started for Croatia against Kosovo, but the game was suspended due to heavy rain after 21 minutes in Zagreb, with a new date to be decided on Sunday.

And Georginio Wijnaldum played 90 minutes as the Netherlands were thrashed 4-0 by France on Thursday night, with Liverpool target Thomas Lemar scoring twice.

On the youth stage, both Joe Gomez and Dominic Solanke started in the England U21s’ 1-1 draw away to the Netherlands on Friday evening.

Gomez took up his new role as the Young Lions’ captain, playing the full 90 minutes in Doetinchem, while Solanke was replaced by Kasey Palmar after 71 minutes.

Trent Alexander-Arnold, a new face among Aidy Boothroyd’s squad, remained on the bench throughout, while Sheyi Ojo was left out entirely.

Rhian Brewster started and played 76 minutes in the England U18s’ friendly clash with Brazil in Shrewsbury, but was unable to find the back of the net in a 0-0 draw.

Elsewhere, Kamil Grabara was an unused substitute in the Poland U21s’ 3-0 European Championship qualifying win away to Georgia.

And both Marko Grujic and Harry Wilson were absent for the Serbia U21s and Wales U21s respectively.