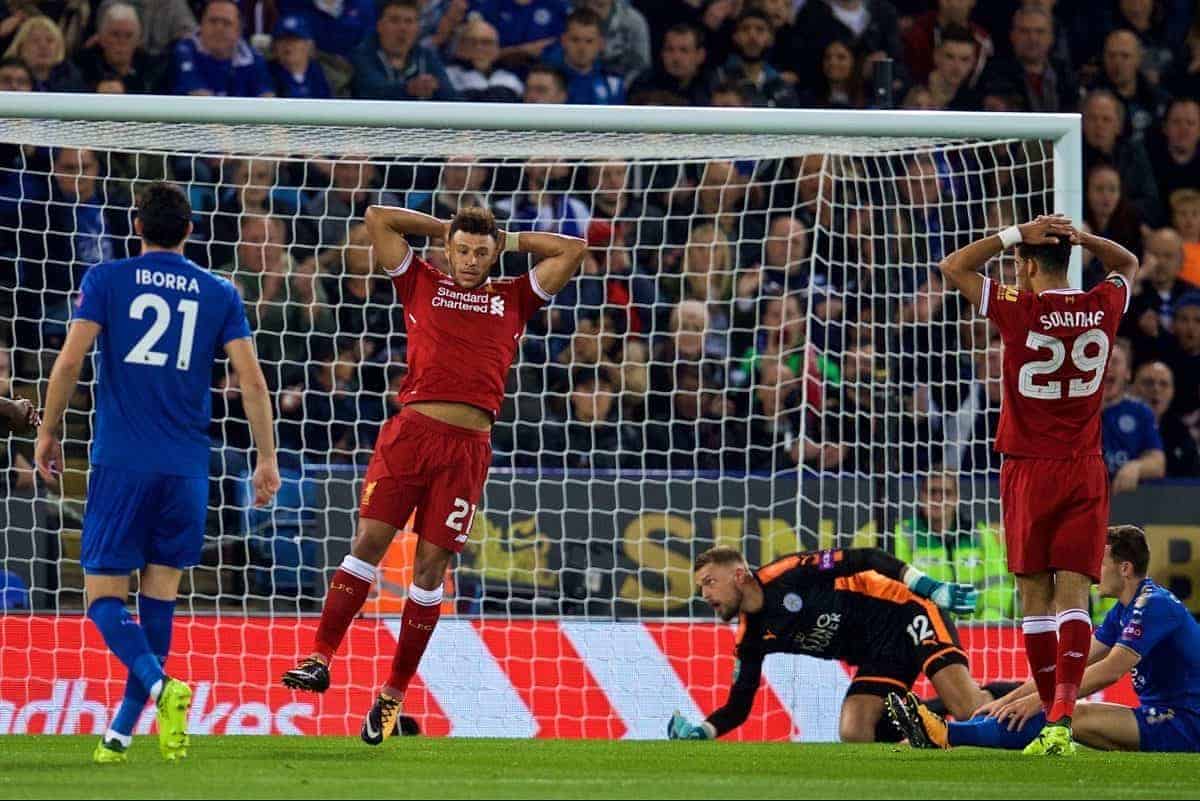 Liverpool crumbled to a 2-0 defeat away to Leicester City in the third round of the League Cup on Tuesday night, in another frustrating display.

Eight months after their last trip to the King Power Stadium, resulting in a 3-1 loss in the Premier League, the Reds made the first of two visits to the East Midlands in five days on Tuesday night.

With Saturday’s league clash in mind, Jurgen Klopp made eight changes to his side for the League Cup, including first appearances since May 2016 for both Danny Ward and Jon Flanagan.

Alex Oxlade-Chamberlain and Dominic Solanke also made their full debuts for the Reds, while Philippe Coutinho was among those to feature of Klopp’s key contingent.

The visitors were heavily rotated but still strong, taking on a Leicester side without a win in their last three games, but the Reds were ultimately made to pay for their profligacy.

The Reds started the stronger of the two sides, and Oxlade-Chamberlain almost marked a dream first start when Andrew Robertson pulled the ball back for him on five minutes, but Ben Chilwell made an excellent block.

Robertson’s deliveries continued to pose the biggest threat, with both Solanke and Coutinho somehow failing to convert from within the six-yard box following crosses from the Scot.

On the opposite flank, Alex Oxlade-Chamberlain took longer to settle into the game, but saw a cross of his own blocked with the impressive Solanke charging in.

Liverpool had an excellent chance to make their dominance count when Coutinho was brought down on the edge of the box on 40 minutes, but the Brazilian curled his free-kick high and wide.

The Foxes had few openings in the opening 45 minutes, with the Reds enjoying 76 percent of the possession, but it remained 0-0 at half-time.

Klopp made a change to his setup at the break, with Ben Woodburn coming on for his first appearance of the season to replace Coutinho as the No. 10 works his way back to full fitness.

The first 20 minutes of the half went without event, but with Shinji Okazaki replacing the injured Leonardo Ulloa for the Foxes, the Japanese striker soon made his mark.

With Vicente Iborra heading the ball down following a Leicester set-piece, Okazaki was on hand to drive home and put the pressure on Liverpool to find an equaliser.

Roared on by the travelling Kop, the Reds continued to push on, with Klopp introducing Danny Ings for his first senior outing for 11 months, taking Georginio Wijnaldum‘s place to provide more thrust.

It was futile, however, as Islam Slimani benefited from some more awful defending from Klopp’s side to drive forward and fire a sensational effort beyond Ward to seal the victory.