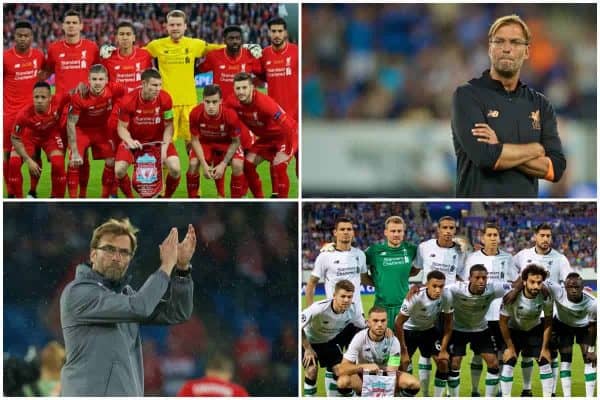 Comparing the Liverpool XI to last time vs. Sevilla

Liverpool take on Sevilla in the group stage of the Champions League on Wednesday night, 15 months after defeat to the Spanish side in the Europa League final in 2016.

Despite a sensational opener from Daniel Sturridge that night in Basel, a goal from Kevin Gameiro and a brace from Coke consigned the Reds to European misery.

A year later, however, and Jurgen Klopp‘s side had secured their return to the continent’s top tier, finishing fourth in the Premier League in 2016/17.

And after a two-legged play-off win over Hoffenheim, Liverpool were drawn against Spartak Moscow, Sevilla and Maribor in Group E, kicking off at Anfield on September 13.

The Reds’ group opener against Eduardo Berizzo’s side could be much different to that loss in Switzerland, with Gameiro, Coke, Grzegorz Krychowiak, Jose Antonio Reyes, Vitolo, Yevhen Konoplyanka, Vicente Iborra and Fernando Llorente all having left the Spanish outfit.

But nevertheless, the clash provides them with an opportunity to exact revenge, and Liverpool are a much-changed beast themselves.

So how does Klopp’s lineup from St. Jakob-Park compare to that which is likely to take to the field at Anfield?

Mignolet endured a hit-and-miss 2015/16 campaign, but produced a reasonable display against Sevilla, at little fault for any of the Spanish side’s three goals on the night.

Since then, the Belgian has established himself as Klopp’s No. 1, battling against adversity and the arrival of a genuine competitor to cement his place between the sticks.

However, Mignolet is expected to make way for Karius for Liverpool’s Champions League campaign, with Klopp adopting an approach similar to that of Luis Enrique at Barcelona in 2014/15.

It is difficult to compare the two, as Karius has made just 17 appearances for the club since joining from Mainz 05 last year, but he is arguably as inconsistent as the Mignolet of 2016.

Upgrade? No, though Karius does have the potential.

Clyne was a genuine contender for Liverpool’s Player of the Season in 2015/16, producing a long run of dependable performances on the right-hand side of Klopp’s back four.

The Englishman was not at his best against Sevilla, but his form that campaign saw him retain his place as first choice last term.

However, injury has hampered his progress this time out, and it is likely that Alexander-Arnold will line up at right-back on Wednesday night.

Though he is only 18, Alexander-Arnold’s performances for the Reds this season so far suggest he can be as good, if not better, of an option as Clyne moving forward.

Upgrade? Not yet, but it’s not far off.

Despite shipping three goals, Liverpool’s standout performer in the Europa League final was Toure, producing a stunning, backs-to-the-wall display in his last game for the Reds.

The Ivorian was partnered by Dejan Lovren, who despite being an erratic presence throughout 2015/16, had enjoyed an upturn in fortunes towards the end of the season.

With Toure gone that summer, and Matip drafted in as Klopp’s leading centre-back, the Reds have a new first-choice pairing.

Lovren remains as untrustworthy as ever, but on an all-round level Matip is certainly a better long-term option than Toure.

Few Liverpool players have followed as strange a redemption arc as Moreno in recent years, with his reintroduction under Klopp this season completely out of left field.

The main cause for this surprise is Moreno’s woeful display against his former side in 2016, with his lack of tactical intelligence leading to just 835 minutes on the pitch last season.

It remains early days, but the left-back looks to have benefited greatly from his spell on the sidelines, and can hope for a better performance on Wednesday night.

Then: Emre Can, James Milner and Roberto Firmino
Now: Jordan Henderson, Emre Can and Philippe Coutinho

Klopp has shifted his default formation from a 4-2-3-1 to a 4-3-3 since that night in Basel, but for the purposes of comparison, his No. 10 that night, Firmino, drops back into the ‘three’.

Against Sevilla, Can served as the holding midfielder alongside a more progressive Milner, but on Wednesday the No. 23 is likely to switch roles as Henderson continues in the defensive role.

This has proved a more effective, and less staid, system, and the prospect of Coutinho operating as the creative, third midfielder provides Klopp with a better platform than in 2015/16.

Before his transformation in Klopp’s midfield lieutenant, and the leader of Liverpool’s pressing game, Lallana served on the right side of the Reds’ three-man supporting unit behind the striker.

Comparing the England international with Klopp’s new first-choice right winger, Salah, is near impossible, with the 25-year-old a more devastating outlet in the final third.

Salah has made an instant impact since making the move from AS Roma, immediately becoming a key player at Anfield.

As with the right flank, the duties of Klopp’s left winger have changed dramatically over the past 15 months, with Mane mirroring Salah’s influence on the opposite side.

Coutinho played a pivotal role in leading Liverpool to the Europa League final from that wide role, but the Reds are a more effective unit with two speedsters.

And furthermore, the Brazilian is better used in the deeper role as part of Klopp’s midfield three.

Curling the ball beyond David Soria with the outside of his boot to put Liverpool 1-0 in Switzerland, Sturridge scored one of the greatest ever goals in a European final.

Unfortunately, as ever, injuries have ensured the No. 15 remains a luxury player for Klopp, making just 12 starts since.

This has arguably benefited the Reds, however, with Firmino shining as first-choice centre-forward.

While he certainly doesn’t possess the finishing ability of his English counterpart, Firmino’s industry, creativity, movement and all-round game make him a marked improvement.

It was remarkable that Klopp could lead the Reds to the finals of both the Europa League and the League Cup in his first season in charge, but failure in the former shaped his future plans.

The additions of Mane and Salah have arguably been the most influential, allowing Klopp to change his system into a more fluid, width-based attacking setup.

Both of his lineups for the Reds’ clashes with Sevilla are affected by key absences, but despite an experiment at the back with the likely inclusion of Karius, the 2017 incarnation is stronger.

And with the Anfield crowd backing them, Liverpool can hope for a much-improved result against the Andalusian outfit this time around.