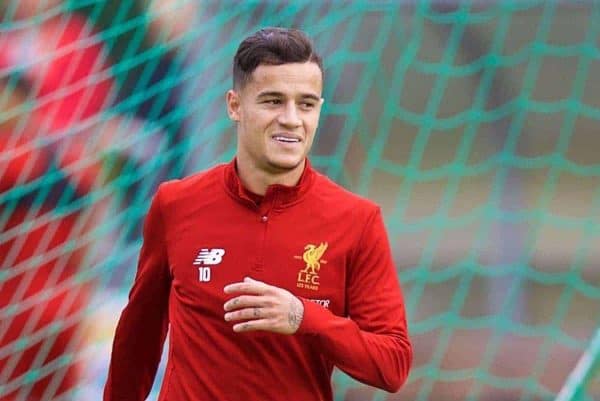 Philippe Coutinho has returned to Liverpool training ahead of Saturday’s clash with Man City, following a lengthy spell on the sidelines.

Coutinho was absent with an alleged back injury from early-August, but joined the Brazil squad for the international break last week, making two appearances.

After his outings against Ecuador and Colombia, Coutinho returned to Merseyside alongside Roberto Firmino on Wednesday.

The 25-year-old was one of 10 players to report back to Melwood on Thursday morning, joining full training as Klopp prepares his side for their trip to the Etihad Stadium.

The playmaker looked to be in good spirits as he stretched alongside Alberto Moreno, belying claims from compatriot Neymar that he was “filled with great sadness.”

He is likely to be in contention for a role in Saturday’s lunchtime kickoff, though it remains to be seen whether he is considered for a starting berth.

Liverpool sealed an impressive 4-0 win at home to Arsenal before the international break, and Klopp could opt for an unchanged outfield lineup.

Simon Mignolet should come back in for Loris Karius, while Klopp may field deadline-day signing Alex Oxlade-Chamberlain.

The England international took part in his first training session at Melwood on Wednesday alongside returnees Jordan Henderson, Georginio Wijnaldum and Andrew Robertson.

Sadio Mane made his way back later that day, while Firmino and Coutinho were joined by Mohamed Salah, Ben Woodburn, Danny Ward, Dejan Lovren, Joe Gomez, Trent Alexander-Arnold, Dominic Solanke and Emre Can on Thursday.

Coutinho’s inclusion in training was expected, with Klopp adamant he would seek to reintegrate his No. 10 when speculation ended, but it still serves as a major boost.

The prospect of Coutinho lining up behind the in-form trio of Mane, Salah and Firmino is mouthwatering.

And it could be that supporters will get their first glimpse of the quarter in competitive action together on Saturday, in another top-four clash.