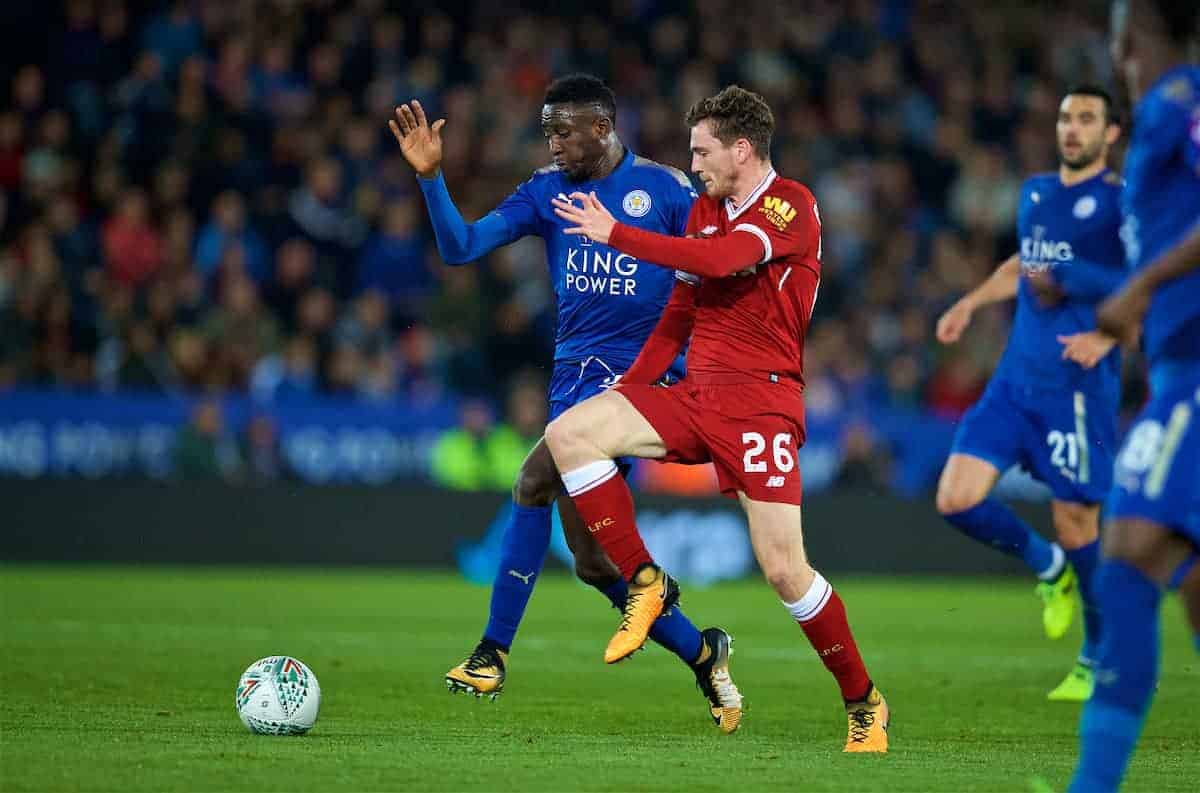 Liverpool search for a first win in five matches when they face Leicester City on Saturday, hopefully bringing an end to a deflating run of form.

Ever since Arsenal were destroyed at Anfield last month and the international break arrived, nothing has really gone right for the Reds.

A sobering afternoon at Man City was followed by successive home draws against Sevilla and Burnley, before Tuesday’s 2-0 defeat to Leicester in the third round of the League Cup.

A mix of woeful defending and poor finishing have been Liverpool’s downfall of late, and this run of form must come to an end before it becomes a crisis.

Saturday’s return to the King Power is a perfect opportunity for Jurgen Klopp‘s side to take revenge on the Foxes, and get some much-needed momentum going.

Key players will return to the side having been rested in midweek, and the hope is that a manager of Klopp’s calibre will not allow the same result second time around.

A lot of the early season positivity has dissolved within the fanbase, and with every disappointing performance that comes along, the worse it gets.

Liverpool are a superior side to Leicester, and if they just sharpen up at both ends of the pitch, they will be fine.

That feels like a big ‘if’ at the moment, though.

Klopp rang the changes for the League Cup tie, with fringe players and youngsters such as Danny Ward, Marko Grujic, Alex Oxlade-Chamberlain and Dominic Solanke given a chance to impress.

Alberto Moreno, Mohamed Salah and Roberto Firmino are all expected to come back into the side, although Andrew Robertson‘s impressive showing at left-back may see him retained ahead of Moreno.

Joel Matip and Dejan Lovren are both injury doubts, but Emre Can is expected to be passed fit having reported to training on Thursday following a knock.

Philippe Coutinho should start, as he slowly returns to his sharpest, and with Can likely to return, it looks as though Jordan Henderson or Gini Wijnaldum will make way.

There are no new injury concerns for Klopp, and the news that Nathaniel Clyne and Adam Lallana are running outside again is a big positive for the manager.

Leciester will hope to welcome Jamie Vardy back to the fray after the striker missed Tuesday’s match, and the same applies to Christian Fuchs. Matty James is out, though.

Last 5 at Leicester (All Competitions) Away fans’ pubs: The Counting House in Freemen’s Common has a nice mix of both home and away fans, and is on the way to the ground. The same applies to the Soaring Eagle Spur Steak and Grill, which is located over the road from the stadium itself. Liverpool have only won once at the King Power in five attempts, in all competitions—a 3-1 win in December 2014, with Lallana scoring the Reds’ first goal and Henderson and Steven Gerrard also finding the net.

Klopp discussed his team’s ongoing defensive problems, and feels confident they will be eradicated sooner rather than later:

“I understand 100 percent [why] we sit here and talk about the things that have happened,” he said.

“I know already about all these problems—or ‘not problems’—and I’ve made my decision already how to work with it.

“But if I talk a lot about it I only create headlines ‘Klopp says this. Klopp says that’ and it doesn’t help us.

“I would prefer not to concede the first goal to be honest.

“This is the long part of a three-game week from Tuesday to Saturday so we have one more session. We can use it but we have to prove it on Saturday.”

The game is live on BT Sport 1, with coverage getting underway at 5pm (BST). Kickoff is at 5.30pm.

As always, our matchday live blog will be in full swing 45 minutes before proceedings, with Henry Jackson on duty from 4.45pm to keep you entertained.