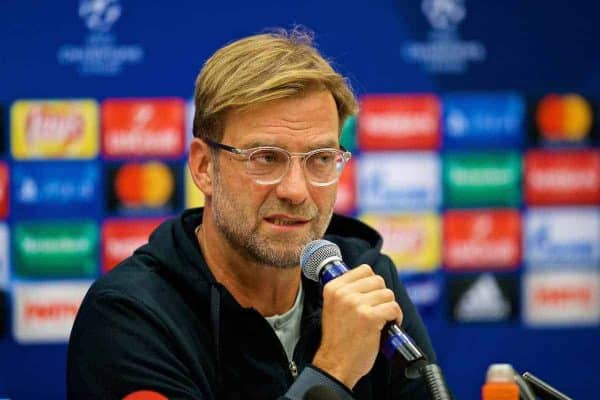 Liverpool visit Spartak Moscow on Tuesday, as they look for their first Champions League group stage win of the season.

After a poor run of form that saw negativity spreading throughout the fanbase, the Reds picked up a massive victory at the weekend.

The 3-2 win at Leicester City wasn’t perfect by any means, but the team showed lots of heart at a very tough ground to visit.

It was a first victory in five matches for Jurgen Klopp and his players, and it will hopefully act as a momentum-booster moving forward.

The Premier League makes way for Champions League commitments on Tuesday, and Liverpool head to Russia knowing that a win would enhance their chances of progressing to the knockout stages greatly.

A 2-2 draw in their opening Group E clash at home to Sevilla was far from an ideal result, but Spartak Moscow are more limited than the La Liga side, having won just three times in their opening 11 league matches this season.

Trips to Russia are never easy for English clubs, but with Sadio Mane available and Philippe Coutinho purring again, Liverpool should have too much for their opponents.

Their last win in the Champions League group stage came against Ludogorets in 2014/15 – hopefully that changes on Tuesday.

As mentioned, Mane is able to play, and his three-game domestic ban has also now been served.

The Senegalese forward will come into the side, potentially in a mouthwatering attack alongside Coutinho, Mohamed Salah and Roberto Firmino.

The quartet are yet to start a competitive match together for Liverpool, and unless Klopp decides to give Salah or Firmino the night off, we will finally witness it on Tuesday night.

Gini Wijnaldum could be the man to make way, allowing Coutinho to thrive in a deeper role, with Jordan Henderson and Emre Can also in midfield.

Loris Karius will start in goal, as Klopp has promised in the Champions League this season, while Trent Alexander-Arnold will come in for the suspended Joe Gomez.

Nathaniel Clyne and Adam Lallana are both still out.

The hosts could be without key man and former Liverpool transfer target Quincy Promes, which is a big boost to the Reds. Roman Zobnin, Artem Timofeev and Georgi Tigiev are also unavailable.

It has been 15 years since the two sides faced each other, and it was Liverpool who had the better of both group stage matches in 2002/03.

The most recent meeting saw Gerard Houllier’s Reds prevail 3-1 away from home, thanks to a Michael Owen hat-trick. Alexander Danishevskiy had given the hosts the lead, though.

Prior to that, Liverpool thrashed their opponents 5-0 in the return fixture at Anfield.

Emile Heskey scored twice on the night, and a Sami Hyypia strike was added to by goals from transfer flops Bruno Cheyrou and Salif Diao.

The Reds and Spartak Moscow both failed to make it out of Group B, however, with Houllier’s men finishing third and entering the UEFA Cup.

Celtic knocked them out at the quarter-final stage.

A bizarre pre-match press conference saw Klopp asked some baffling questions from media and grow increasingly frustrated by the Russian interpreter’s lack of knowledge of footballers!

There was, inevitably, questions on LFC’s defending, plus Spartak’s key man Quincy Promes.

Should you be unable to watch the game, however, our live blog will be running from 7pm, with Ben Twelves hopefully guiding you through a Liverpool victory.