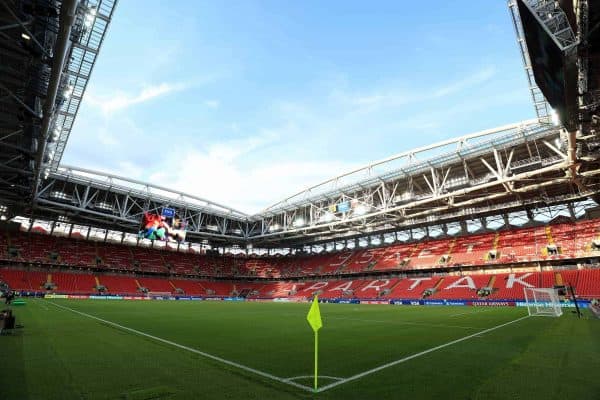 Liverpool visit Spartak Moscow in the Champions League on Tuesday evening, but what sort of threat will the Russian Premier League side pose?

It is the eve of the Reds’ second Group E clash of the season, as they hope to improve on their 2-2 draw with Sevilla at Anfield on September 13.

Jurgen Klopp‘s side are in the midst of a patchy run of form, despite victory against Leicester City on Saturday, and defeat in Russia would give them a lot of work to do in their quest to reach the knockout stages.

Liverpool are favourites going into the game, but trips to Russia are never particularly nice and the hosts will be very much up for the occasion.

The reigning domestic champions have not made an impressive start to their season, however, sitting seventh in the table, so the Reds may feel they are there for the taking.

Ahead of the game, we spoke to Russian football expert and LFCTV commentator John Bradley (@jbradleymedia) to hear all about Liverpool’s opponents.

Not many Liverpool fans will know huge amounts about Spartak Moscow; what can you tell us about their playing style under Massimo Carrera?

Spartak is a huge club, they are Russia’s club and therefore, the demands on the players who represent them is gargantuan.

Just handling the pressure of expectation and lifting the clubs first title in 16 years was down to the way Carrera brought a rather disjointed set of players together.

He does like to play three at the back if he can, but doesn’t really have the quality of defensive player to do that. So, expect a 4-2-3-1 against Liverpool that will become everyone behind the ball when the Reds are having inevitable spells of pressure.

The focus of their build up will go through the Brazilian Fernando—a fine acquisition from Sampdoria last year—and captain Denis Glushakov, if fit.

Much of the attacking play will depend on the fitness of Quincy Promes. He missed only his fourth game through injury this weekend and it would be catastrophic for Spartak if he is missing.

He’s been their top scorer for three seasons and is the ‘out ball’ for them.

What are their strengths and weaknesses as a team?

Strengths: A team bonded together by Carrera, who don’t know how to give up. Several goal threats. A good home record—beaten twice at home in a year, winning 13 of the 16 games.

Weaknesses: A slow defence, vulnerable to mistakes, and a goalkeeper always likely to throw in a costly error. Also, below the first 13-14 players they are a little weak, squad-wise.

Who are Spartak’s key players?

Promes has been the best player in Russia for the last three seasons and Spartak’s top scorer from the wing.

Ze Luis is a Giant Cape Verde international centre-forward. Very powerful in the air and an obvious threat from set pieces and good wide delivery.

Glushakov is one of the few Russians who doesn’t look out of place in international football. Club captain and driving force from midfield. Very capable of nicking important goals.

Are there any head-to-head battles with Liverpool players that you see being particularly important?

There are three key battles.

Whoever plays full-back for Liverpool against Promes will have a tough game. He won’t sit wide, he will be roaming everywhere and needs to be watched.

At the other end of the field, Sadio Mane and Mo Salah could have plenty of joy against Andrey Yeshchenko and Dmitri Kombarov. Both are vulnerabilities, pace and position-wise, and the Reds pair could annihilate them.

They sit seventh in the Russian Premier League currently, having cruised to the title last season; do you feel Liverpool should have too much for them?

Absolutely. In the old days, the old stadiums, poor facilities and poor pitches were a hindrance when playing in Russia, but the Otkrytie arena is a stunning, modern venue and the playing surface is Grade A.

Spartak will be competitive and will show plenty of heart and endeavour, however, Liverpool’s quality should prevail.

Jumping forward to December, do you see these being the two teams to make it through Group E?

Russian clubs are no longer in a position to be competitive in the Champions League, and even though teams won’t relish Moscow later in the year, third is the best Spartak can aim for.

Finally, hit us with a prediction for Tuesday’s clash…

Once Liverpool’s players have seen the very rowdy atmosphere at kick-off and the outstanding tifos behind the goal, I fully expect them to dominate Spartak and run out comfortable winners.