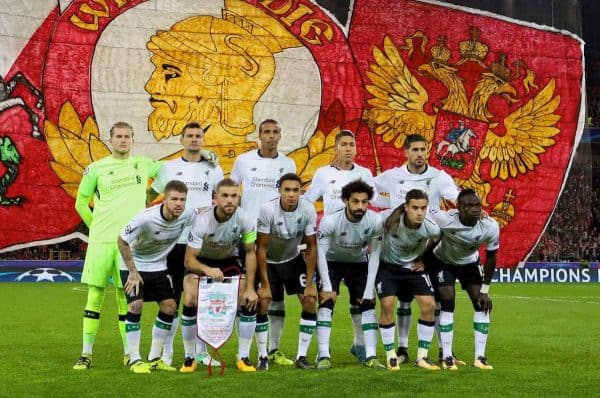 Yet more poor finishing from Liverpool cost them all three points against Spartak Moscow on Tuesday, with several players culpable.

Picked ahead of Simon Mignolet, as looks to be the case in the Champions League this season, Karius once again flattered to deceive.

The 24-year-old was far too slow with his foot movement for Fernando’s free-kick, allowing the ball to fly into the centre of the goal.

Did save one that flew at his face in the second half, which is probably his first save of the season.

With Joe Gomez suspended, Alexander-Arnold was given a chance to shine, and he took his opportunity in impressive fashion.

The right-back was always an outlet with his pace and use of the ball, and he almost volleyed Liverpool ahead after nice link-up play with Mohamed Salah. Shot wide late on, too.

Not always great defensively, but offered an effective outlet down the right with some good balls into the box.

A few stray passes let him down, but generally, he did whatever was asked of him.

The much-maligned Crotian had a far better night at the office than of late, proving that he is not always the liability he is painted as.

He made a number of important tackles and interceptions when Liverpool looked light at the back, and managed to avoid the moments of madness that can tarnish his game.

Much improved, albeit without having to do much.

Like Alexander-Arnold, his speed down the flank was always an outlet, and his unselfish running helped create plenty of space for Sadio Mane.

One of the more blameless individuals, on a deeply frustrating night.

Henderson was arguably Liverpool’s best player against Leicester City on Saturday, and he was again decent against Spartak, as he shows signs of returning to form.

The Englishman’s passing was crisp and incisive throughout, and one Steven Gerrard-esque cross deserved to be converted by Roberto Firmino.

A performance full of authority, if far from spectacular, with some important tackles made when the hosts were breaking late on.

When Can has an off night, he is invariably noticeably poor. This was one of those nights.

A reckless early booking set the ball rolling in an erratic performance, and his dawdling on the ball and sloppy pass led to the hosts winning their free-kick for the goal.

It wasn’t all bad, but he was very frustrating to watch and should have been substituted earlier.

Coutinho started in the deeper midfield role that he has so craved, and at times, he was superb against the Russian side.

Every time he had the ball you felt something might happen, and he levelled the scoring in majestic fashion, following a one-two with Mane.

It’s so good to have him back close to his best.

Salah will have far better nights in a Liverpool shirt, but as always, he looked a huge threat out on the right wing.

His understanding with Alexander-Arnold caused Spartak constant problems, and he hit the target with a well-struck early shot.

The 25-year-old’s end product was poor, though, and he got worse as the match went on.

Back in the side after missing the Leicester win through suspension, Mane was an absolute menace in his new left-sided role.

In every one-on-one situation, he had the beating of his opponent, and his assist for Coutinho’s goal highlighted his movement and intelligence to perfection.

Strangely subbed early, which must have been down to fitness.

Firmino hasn’t been at his sharpest since the international break, and this was his worst performance in a long time.

His touch was very sloppy, especially by his usual high standards, and three big chances missed will inevitably lead to people questioning his finishing.

Nothing happened for him at all, and he should have been replaced.

Produced a couple of glaring misses late in the day, and his decision-making was ponderous. Very disappointing cameo.

Tried to make things happen in place of the erratic Can, but was largely unnoticeable.

Milner might have been a better option, given his cameo against Hoffenheim and better experience in such fixtures.

This was a night when the players let Jurgen Klopp down, with the manager picking the strongest team possible but too many individuals missing big chances.

The general football was good, with Liverpool completely dominating the contest, and it feels harsh to blame Klopp too much.

He did take too long to make subs, though, and had to bring off Firmino instead of Mane.