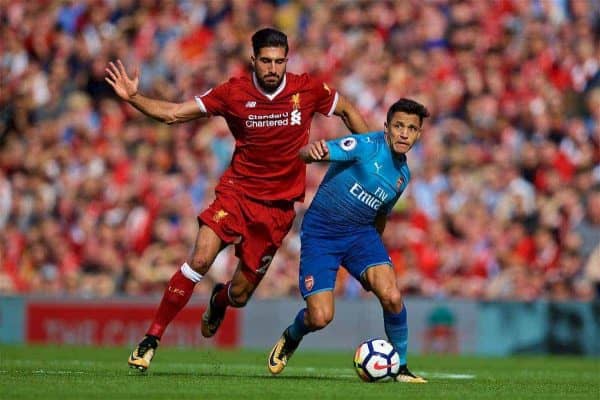 Arsenal vs. Liverpool move to Christmas Eve in doubt due to safety concerns

Sky Sports’ proposal to reschedule Liverpool’s away clash with Arsenal in the Premier League to Christmas Eve have been dealt a major safety blow.

The Reds’ trip to the Emirates Stadium is believed to be under consideration for a controversial plan from the broadcaster as they navigate the festive period.

With Christmas Eve falling on a Sunday this year, Sky Sports are rumoured to be set to maintain their typical lineup, with Arsenal vs. Liverpool the marquee fixture.

But according to the Telegraph, their plans are now in doubt, due to the unlikelihood of Arsenal being awarded a safety certificate for the game.

This is due to the reluctance of stewards to staff the Emirates on a day that is traditionally free of football.

Concerns over travel for away supporters have already been raised, with threats of a boycott from both sets of fans pervading talks between the clubs, Islington Council and the Metropolitan Police.

“As of this morning, it is understood that Arsenal were still unable to guarantee that sufficient numbers of stewards would be willing to work at that time,” Jeremy Wilson writes.

Sky are due to announce their schedule for December and January on October 16.

Speaking at the end of September, Jurgen Klopp urged to broadcasters take a common-sense approach to rescheduling fixtures, for the benefit of players as well as supporters.

“If the supporters want to see a game on Christmas Eve, then probably the broadcasters will find a way,” he said.

“If something not too cool is possible around fixtures, then Liverpool is involved! It would mean we play four games in nine days.

“I always said, the broadcasters have to consider is what they sell depends on the quality and freshness of the players.

“Sky has to make the decision to do this, bring supporters onto the street that night.

“We are used to it, but if you want to think about all the other people involved…or maybe we’ll play without the media!

“I cannot imagine anybody wants to watch football that night.”

Liverpool supporters’ group Spirit of Shankly released a statement this month insisting the proposal “is wrong and no fixtures should be scheduled for this day.”