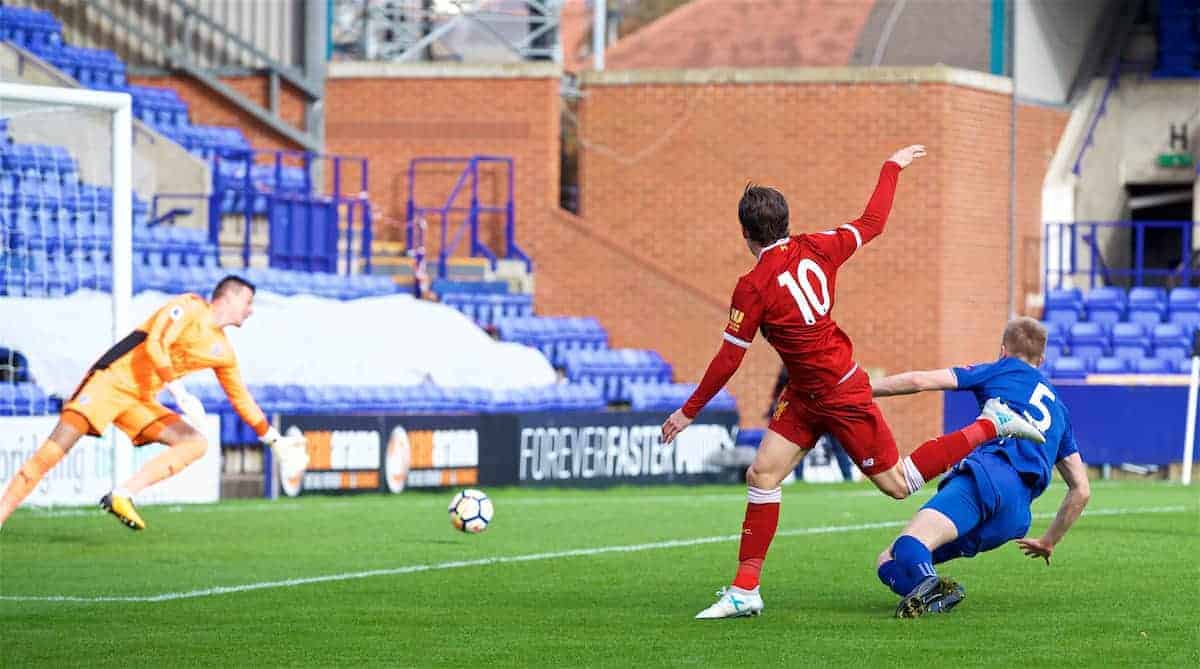 Harry Wilson scored his eighth goal of the season on Sunday, but Liverpool’s U23s were defeated 2-1 by Leicester City at Prenton Park.

Neil Critchley‘s side were top of Premier League 2 going into the game, following Monday’s richly-deserved 3-1 win over Man United’s youngsters.

The Reds took on a Leicester side sitting fifth in the table, with the hosts hoping to pull further clear of second-place Everton.

There were four changes to the team that defeated United, with Dominic Solanke starting up front, despite a late cameo for the first-team on Saturday.

Lloyd Jones, Juanma and Cameron Brannagan were the other three who came into the side.

Danny Ings saw an early shot blocked after good work by Wilson, and Corey Whelan was on-hand to deny Keirnan Dewsbury-Hall at the other end.

Josh Gordon fired over for the visitors, and he was then brought down by Jones, who deservedly received a yellow card.

Admiral Muskwe missed a great chance to give Leicester the lead, and he also came close moments later. It was Leicester who were the better team in the opening quarter. Liverpool were ahead after 26 minutes, however, as Wilson scored his eighth goal of the campaign with an expertly-taken solo effort. What does he have to do to earn more first-team opportunities?

Just before half-time, Leicester were level, as Muskwe converted from close-range after hesitant Reds defending.

Kamil Grabara produced a superb save to keep out George Thomas’ shot soon after the restart, and George just missed the target.

Solanke dragged a shot wide and Ings was denied by Jakupovic, as Liverpool’s strikers did their best to put their side ahead.

The game ebbed and flowed, but good opportunities became few and far between. Matty Virtue curled a shot wide of the target, and an acrobatic effort from Ings was saved.

In the dying seconds, Sam Hughes won it for the visitors, with his header adjudged to have crossed the line. Jones almost equalised straight away, but the defender hit the crossbar.

It was a first league defeat of the season for Liverpool, and a bitter pill to swallow for Critchley and his players.

Up next for the Reds is a home Premier League Cup tie against Bristol City on November 5, as they look to bounce back from defeat. Daniel Sturridge‘s goal against Huddersfield Town will have done his future chances no harm, and Solanke and Ings will have wanted to respond on Sunday.

Although both were lively figures throughout proceedings, they failed to be ruthless in front of goal and lacked the desired all-round influence.

Ings cannot buy a goal at the moment, and it is hard to see him breaking back into the first-team any time soon, while Solanke remains a work in progress.

Neither are doing enough to justify leapfrogging Sturridge in the strikers’ pecking order. Ovie Ejaria has struggled to kick on in recent months, with injuries certainly not helping his development.

The 19-year-old was impressive against United at the start of the week, and he took his good form with him to Prenton Park.

There was nothing particularly earth-shattering about Ejaria’s performance, but he was a dominant figure in the middle of the park, and everything he did exuded class. One turn in the second-half was delightful.

Liverpool supporters are critical of the first team’s rather one-dimensional current midfield – could the guile of Ejaria be a useful addition?

There wasn’t a standout candidate, but Wilson’s quality again shone brightest. His touch and finish for his goal highlighted a player full of confidence.