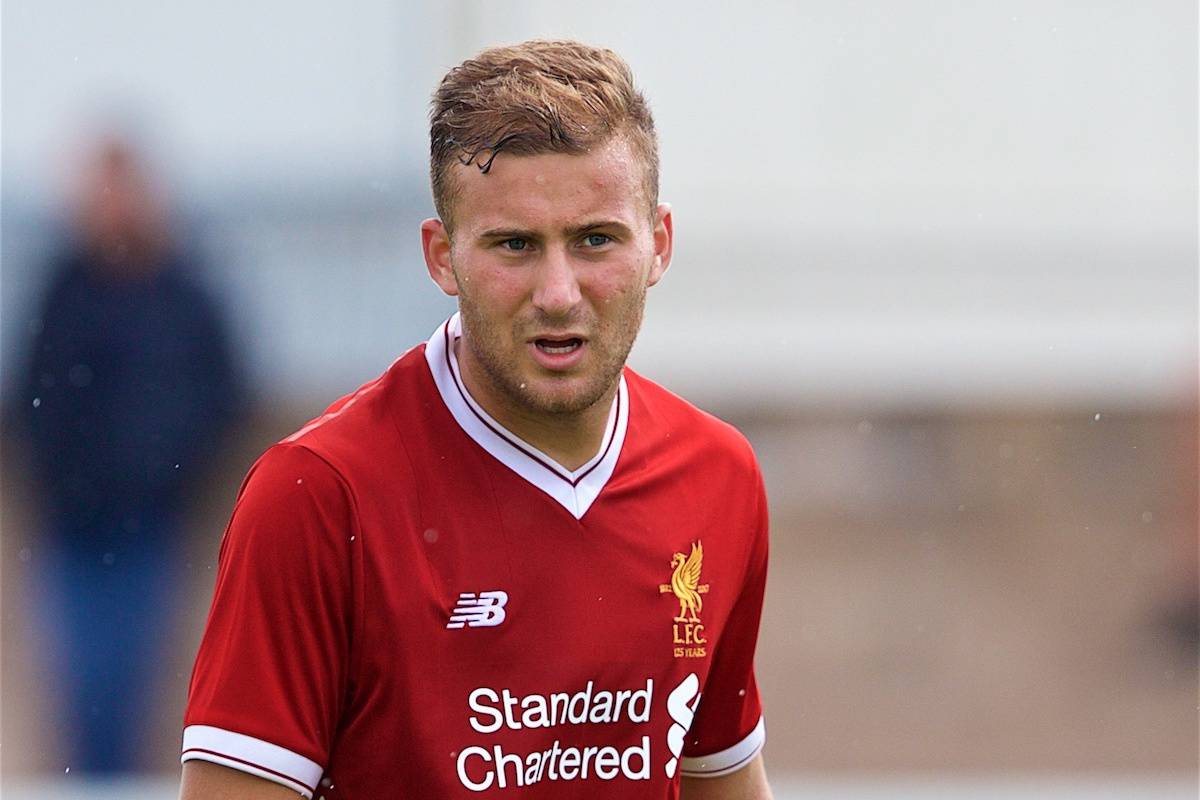 Herbie Kane takes the spotlight in our latest Liverpool FC academy profile, after joining Jurgen Klopp‘s squad for training during the international break.

As the Reds squad slowly returned from duty with their respective national teams at the end of the October interval, Klopp called upon a host of youngsters to join his sessions at Melwood.

With the majority of his key players absent, the German included more regular fixtures in Caoimhin Kelleher, Cameron Brannagan and Harry Wilson, along with four others.

Both Conor Masterson and Yan Dhanda had experience of life under Klopp having trained with the Reds on their mid-season trip to La Manga in February, but for Kane and Matty Virtue, this was a rarity.

The presence of Kane at Melwood was particularly interesting, as the 18-year-old midfielder is one of the most underrated, but high-potential, youngsters in Liverpool’s U23 ranks. Signed from Bristol City in 2013, Kane was part of a youth recruitment drive during Brendan Rodgers’ reign, as the Ulsterman prepared for what proved to be his best season on Merseyside.

Dhanda, Pedro Chirivella, Sergi Canos and Rafa Paez were among those to join the Reds that summer, with Kane departing Ashton Gate at the same time as another local lad, Jacob Maddox, who joined Chelsea.

Both 14, there were high hopes for both Kane and Maddox at their respective clubs, and the former made a swift impact on making the switch to Merseyside.

This came in the Junior Milk Cup in Northern Ireland, when Kane scored an impressive free-kick to seal a 2-0 opening victory over County Tyrone in Limavady.

While Liverpool ultimately lost to Southampton in the semi-finals of the tournament, Michael Beale, who was then in charge of that U15s group, clearly spotted potential within his young squad.

Alongside Kane in County Londonderry were the likes of Dhanda, Masterson and Trent Alexander-Arnold, with the latter proving to set the trajectory for his team-mates in the coming years. Kane moved up from the U16s squad to the U18s in 2015, as did Dhanda, Masterson and Alexander-Arnold, and formed an impressive youthful core in Neil Critchley‘s ambitious side.

The teenager was a regular fixture in Critchley’s starting lineup in 2015/16, chipping in with goals and assists throughout, though Alexander-Arnold, Adam Phillips, Brooks Lennon and Ben Woodburn typically took the plaudits.

But when Ovie Ejaria prompted a foul on the edge of the area in the U18s’ play-off clash with rivals Everton at Finch Farm towards the end of the season, Kane was handed his big moment.

Standing over the free-kick alongside Phillips, Kane produced a replica of his maiden goal for the U15s back in 2013, as the young Reds went on to seal an emphatic 4-0 Merseyside derby victory.

He rounded off the season with another goal, in a 2-2 draw with Chelsea, in what would prove to be his last game as a full-time member of Critchley’s U18s squad. Over the years, Kane and Alexander-Arnold’s progression has been binary, including on the England youth stage, where the midfielder has represented the U17s, U18s and U19s.

The pair were both earmarked by Steven Gerrard in his 2015 autobiography My Story, too, with the Liverpool legend revealing how he told Pepijn Lijnders to ensure they were both in his group whenever he coached the U18s as part of his UEFA ‘B’ Licence course.

Kane was already part of Lijnders’ Talent Group, a select host of youngsters cherrypicked to train at Melwood once a week, and the captain’s approval served to highlight his potential.

But while last season proved a breakthrough campaign for Alexander-Arnold, who made his first-team debut and took up a key role for the U23s, Kane’s efforts in stepping up were marred by injury.

He made just two appearances in Premier League 2 last term, along with a handful of outings for the U18s, missing seven months of the campaign due to a series of issues. Kane was still handed a new four-year deal with the club at the start of 2017, however, and Beale, speaking to Rousing The Kop after his switch to Brazil, predicted a “big year” for the youngster this time out.

“He is a player that I really like and a boy that has a great character and never-say-die attitude on the pitch,” Beale explained.

“It’s a big year for him next year to step forward and show his talent.”

Kane’s opportunity comes as Critchley follows him up to the U23s, and under the 38-year-old he will be given the time and space required to hone his game. An energetic midfielder at his best when able to overlap and support attacking moves, Kane is a real goal threat from both long range and in the penalty area.

His passing game is crisp and economical, while he is not one to shirk a challenge in the middle of the park, either.

This season, as he looks to establish himself as a key player under Critchley, as well as under Gerrard in the UEFA Youth League, Kane will need to continue to develop his physicality and tactical intelligence.

Joining the first team for training whenever necessary will be a major benefit in this regard—as still just 18, Kane has the raw potential to develop into a useful option for the future.