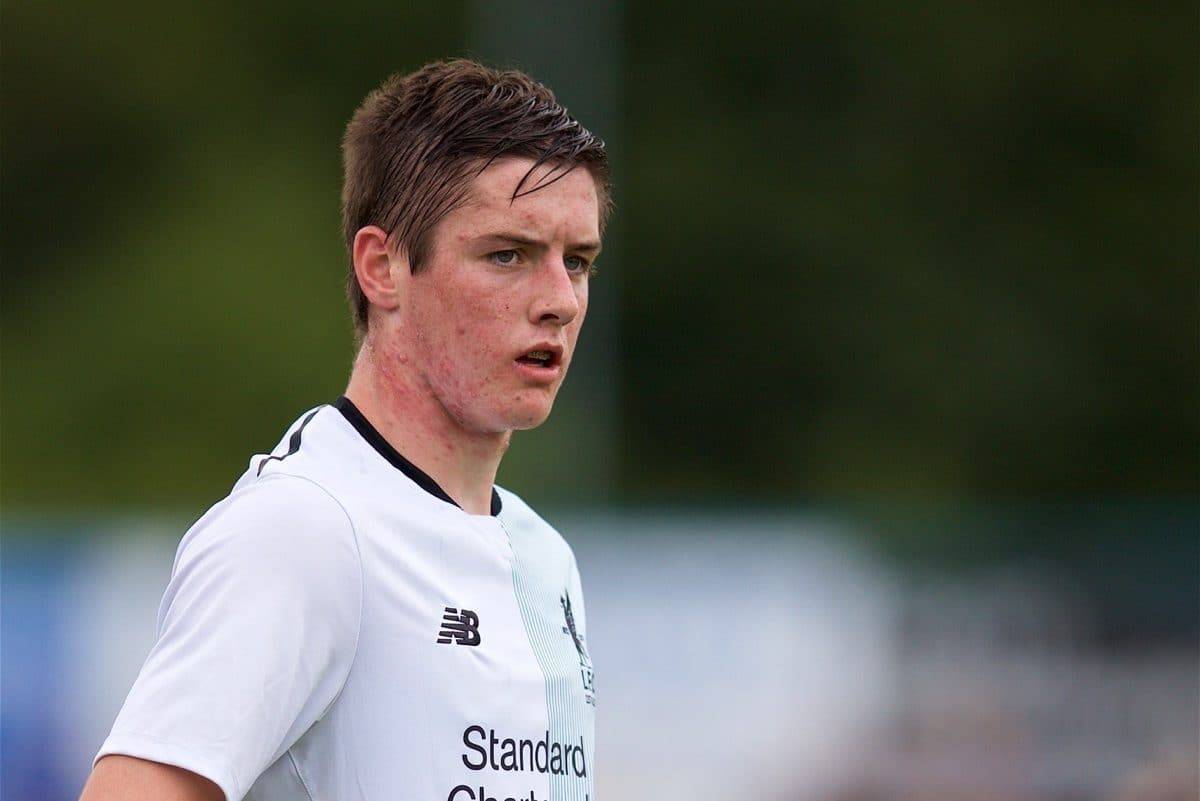 Liverpool through and through, U18s midfielder and Steven Gerrard’s captain Liam Coyle is the focus as we continue our series of academy profiles.

Successful Liverpool sides over the years have been built around a tough-tackling, no-nonsense on-field general, and this has bled through from the Scouse DNA.

While the all-action approach of Jon Flanagan endeared the full-back to supporters in the 2013/14 campaign, few have followed in Gerrard’s footsteps as the local lad in midfield.

For the likes of Jay Spearing, Conor Coady and Jordan Rossiter, chances in the first team proved fleeting, unable to pair their aggression with the nuance and technical quality required to establish themselves.

Now, with a new generation of youngsters from Merseyside working their way through with Gerrard in the dugout at Kirkby, Coyle has stepped forward to add bite to the 37-year-old’s midfield. “It is very important to me, especially with the position I play in front of the back four,” he told LiverpoolFC.com.

“It is my job to break the play up and then start the attacks for the team. It gets the team going if they see a big tackle going in and it sparks everyone else into action.”

Born in Liverpool, Coyle lives close to the first team’s training ground in Melwood, but at just 17 spends most of his time at Kirkby.

Having joined the Reds at 10, Coyle worked his way through the ranks to make his debut for the U18s at the start of the 2015/16 campaign, at home to Blackburn Rovers.

In the side that day were Shamal George, now-U23s captain Corey Whelan, Conor Masterson, Trent Alexander-Arnold, Ovie Ejaria, Yan Dhanda and another debutant in Ben Woodburn.

While that day ended in a 4-0 loss, Coyle didn’t look back, establishing himself under Neil Critchley despite his inexperience at U18 level, taking up a key role for the young Reds for the following campaign. Typical of his roots, Coyle is a holding midfielder with a tough defensive bent, and his willingness to take responsibility in the middle of the park belies his young years.

With Masterson making the step up into the U23s this season, Coyle has been entrusted with the captain’s armband for Gerrard’s U18s, and the teenager leads by example, through crunching tackles and composed passing play.

He provides the more progressive likes of Edvard Tagseth and fellow Scouse youngster Curtis Jones the perfect foil in midfield, allowing his team-mates to surge forward into the final third.

At 17, this is an admirable quality to possess, with Coyle able to read the game and break up attacks as a crutch for Gerrard’s attack-minded system to rely upon.

Owing to his development in a variety of roles including on the wings, Coyle has also been utilised at right-back for the U19s in the UEFA Youth League and in rare outings for the U23s.

This has aided his ability in front of goal, too, with the youngster chipping in on a regular basis in the U18 Premier League, most notably with his ability to get on the end of set-pieces. Naturally, Coyle has a long way to go before he can set his sights on a first-team role at Anfield.

He has already acknowledged his need to “not dive in and make silly challenges,” after a spate of red cards under Critchley, and there is still work to do to calm his rashness in the tackle.

Furthermore, with Coyle naming Chelsea‘s N’Golo Kante as his role model in the holding duty, developing a better understanding of when to press and when to sit is key.

And working under Gerrard, who operated as Brendan Rodgers’ No. 6 in his latter years at Anfield, he will be eager to hone his passing game, particularly his ability to spray the ball over distance.

Coyle is already on the right track, though, and the teenager is clearly on Critchley’s radar, having started for the U23s in Premier League 2 and the Lancashire Senior Cup this season. It should be a realistic target to make the step up to U23 level next season, where he can challenge the likes of Matty Virtue and Herbie Kane.

In terms of emulating Gerrard and making it to the first team, it is essential for Coyle to ensure he stands out—despite the understated nature of his role—as Jurgen Klopp demands his midfielders contribute in all areas.

That remains a long way in the distance, however, and so far it has been a great start for the 17-year-old Scouser.

More than just a throwback, Coyle will be one to watch as the season unfolds at Kirkby.