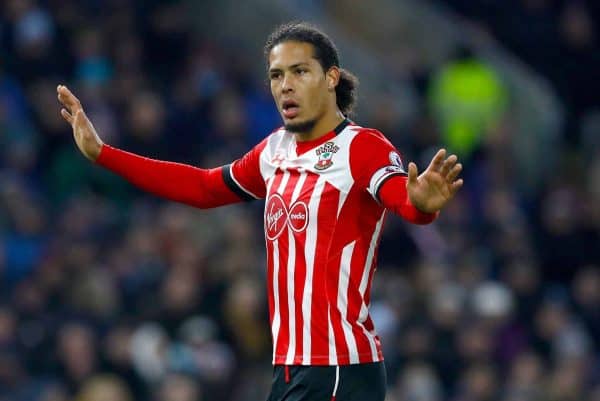 The Reds failed in their attempts to sign Van Dijk in the summer transfer window, after their behind-the-scenes approach led to the Saints complaining to the Premier League.

Jurgen Klopp‘s side were forced to publicly end their interest, but with Van Dijk still looking to leave St Mary’s in the near future, a January move has been mooted.

Van Dijk’s efforts to force through an exit, just one year after signing a six-year contract with Southampton, has softened their supporters’ stance over his future.

It remains to be seen whether the club will also be open to a deal, but according to the Mirror, if they do they could be set for an approach from Barcelona.

The Spanish giants are said to have scouted Van Dijk for the Netherlands this month, and “Southampton would rather sell the 26-year-old to a club abroad.”

Man City and Chelsea are also named as potential suitors, though it must be noted that Van Dijk’s preferred destination was Liverpool.

Elsewhere, the Reds’ rumoured interest in both Schalke midfielder Leon Goretzka and Lazio defender Stefan de Vrij may have taken a major blow.

According to German publication Bild, Schalke are set to offer Goretzka the most lucrative contract in the club’s history in order to keep him at the Veltins-Arena.

Goretzka’s current deal expires next summer, and he has been touted with a move to Bayern Munich, while Liverpool are among the clubs regularly linked.

With sporting director Christian Heidel conceding that Schalke would “go to the pain threshold” to keep the 22-year-old at the club, their offer is said to be worth £135,000 a week.

De Vrij is also out of contract in 2018, but the defender has said: “I’m very happy to be here, we are talking to the club now and I hope to find an agreement.”

The Reds’ supposed interest in both Goretzka and De Vrij is far from concrete, however.

Liverpool are believed to have continued scouting a host of youth talent around the continent, including two midfielders in Rosenborg’s Olaus Jair Skarsem and Bayer Leverkusen’s Kai Havertz.

And according to the Mail, Fortuna Sittard’s Perr Schuurs remains on the radar.

The 17-year-old went on trial with the U23s in May, and they “have been impressed with his progress” since, having established himself as a first-team regular for the Eerste Divisie side.