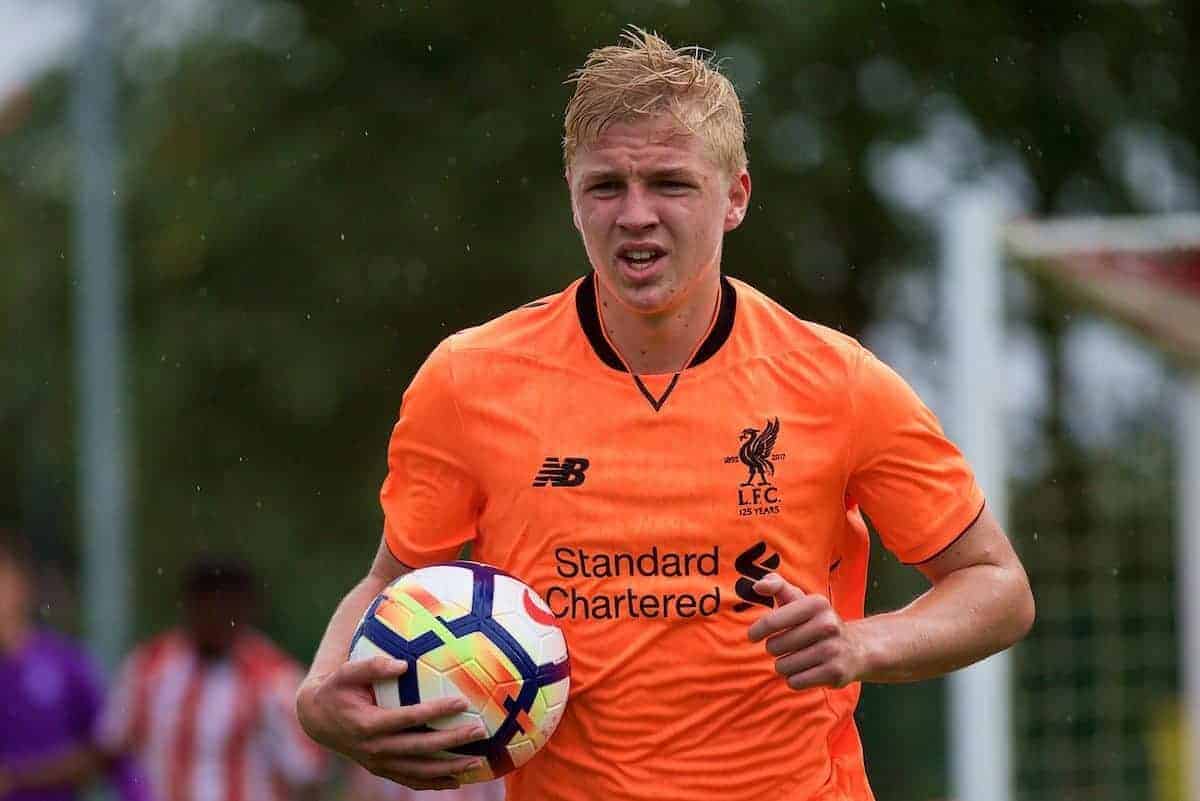 Born in Darlington in 2001, Longstaff was with the Newcastle academy until the age of 13, working his way up the ranks from U9 level before Liverpool came calling.

He caught the eye on Tyneside for his quick feet and impressive skill, having honed his technical game from before his 10th birthday with both Coerver Coaching and Streetwise Soccer.

Longstaff initially joined Liverpool’s U15 ranks, but quickly impressed coaches at Kirkby and made the step up to the U16s, where he worked under Barry Lewtas.

His debut for the U18s came, fittingly, away to Sunderland, replacing Okera Simmonds to play the final 22 minutes as he returned to familiar surroundings in the heavy rain of the northeast.

Though relatively muted on his first outing, Longstaff made his mark on Neil Critchley‘s side soon after—when the then-U18s manager turned to his substitutes’ bench in the dying stages of a fierce derby clash. After a deserved sending-off for Adam Lewis saw the young Reds relinquish a 1-0 lead to go 2-1 down away to Man United in March, Critchley sent Longstaff on for the final 10 minutes.

With Liam Coyle brought down 35 yards from goal, Yan Dhanda stepped up to curl a hopeful free-kick into the box.

The playmaker’s delivery was met by a rampaging Conor Masterson at the far post and, with the centre-back sending the ball back across goal, there was Longstaff to bundle home the equaliser.

In only his second outing for the U18s, just three weeks after turning 16, Longstaff had scored a vital goal in one of Liverpool’s most important games of the season.

Longstaff continued to make sporadic appearances for Critchley’s youngsters last term, starting against both West Ham and Reading in the league, as well as substitute appearances in clashes with Arsenal, Chelsea and Man City.

But his breakthrough is set to come this campaign, as he looks to pair his technical prowess with the physical and mental attributes required to shine. A quick-footed young attacker, Longstaff is capable of operating on either flank as well as deeper in midfield, with his best position arguably on the left wing.

Owing to his upbringing in skill schools, entrusted to express himself on the pitch, the 16-year-old is adept at taking defenders on at pace.

His dribbling ability allows him to carve out opportunities for his team-mates, with Longstaff’s creative game providing Critchley, and now Steven Gerrard, another dimension.

And he is adept at finding the back of the net, too, as while he is yet to add to his goal tally for the U18s, he has proved clinical for England U16s over the past year.

Longstaff was part of the squad of Young Lions to travel to Rio de Janeiro for two friendly clashes with their Brazil counterparts in November of last year.

In one game, Longstaff scored a hat-trick, leaving one of Brazil youth coaches reeling, telling football writer Tariq Panja that the youngster “reminds me of [Mesut] Ozil.” Comparisons with Ozil do check out in terms of Longstaff’s ability to glide through defences and pick a pass, but he will be required to build on this if he is to fit in at Liverpool for the long term.

He has already graduated to the status of regular starter under Gerrard this season, alternating with Liam Millar as two of the legendary midfielder’s primary options out wide.

And facing stiff competition from the Canadian, as well as Curtis Jones and Glen McAuley, Longstaff will need to add consistency to his game, particularly in terms of goals and assists.

Furthermore, adjusting to the Reds’ high-intensity pressing game will be paramount for the teenager, as Jurgen Klopp clearly already has an eye on his development.

With the German short of numbers as the first team prepared for last season’s trip to take on West Brom, Longstaff was among those called up to train at Melwood. He had already experienced life in West Derby, as part of Pepijn Linders’ “new Talent Group,” with the likes of Jones and Paul Glatzel, but the heightened demands of training under Klopp will have been clear.

Given a taste of what is on offer if he makes the grade at academy level, Longstaff will be eager to establish himself and make the step up from U18s to U23s and, eventually, to the first team.

That remains in the distance, for now, as Longstaff will need to cement his place under his current manager first.

Gerrard was behind Critchley in the dugout that day when the young winger struck late to sting United, however, so he will be well aware what a talent he possesses in Longstaff.