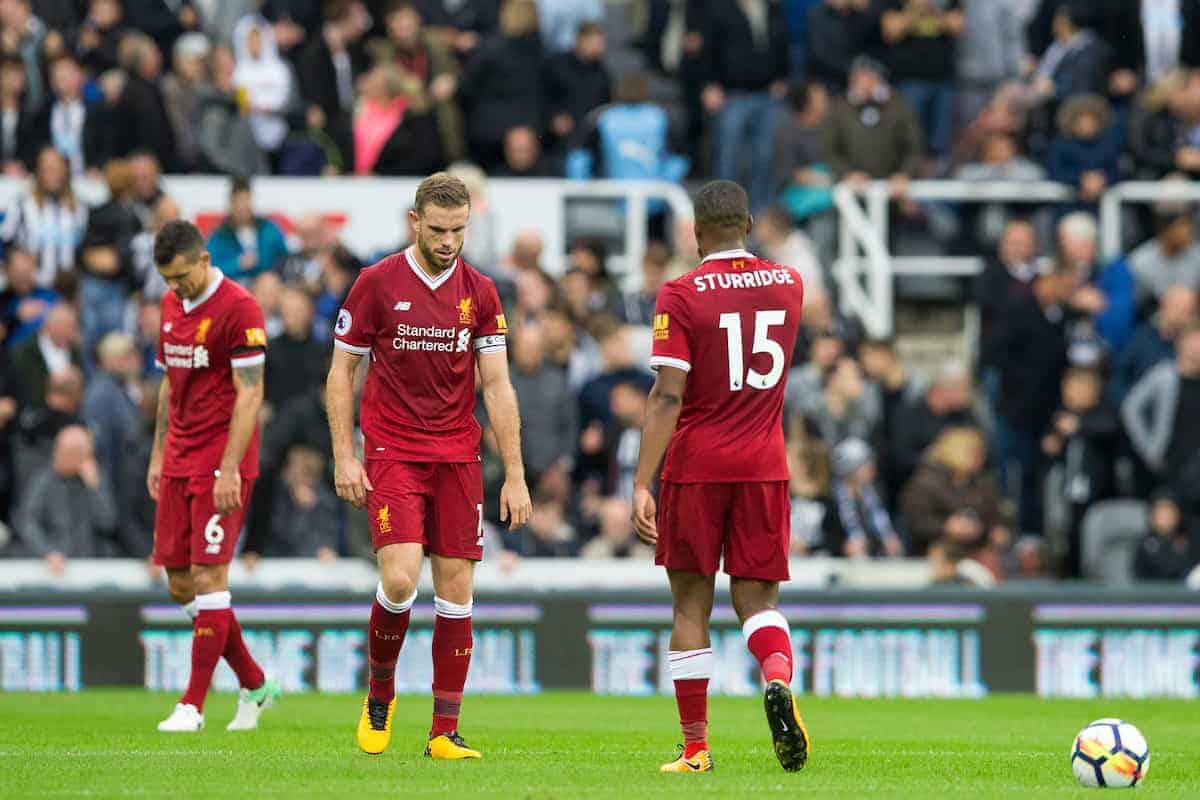 Liverpool were once again left to rue missed chances as they drew 1-1 at Newcastle United in the Premier League on Sunday evening.

Liverpool travelled to the north east hoping to make it back-to-back league wins, but instead recorded a second successive 1-1 draw.

Jurgen Klopp made four changes from the midweek draw in Russia, with Emre Can and Roberto Firmino the big-name casualties to the starting XI.

Loris Karius dropped out as expected, along with Trent Alexander-Arnold, with Daniel Sturridge, Joe Gomez and Simon Mignolet coming into the lineup, while Sadio Mane made his return from domestic suspension.

The Reds dominated possession for long spells, but the same issues of recent weeks blighted both ends of the pitch throughout the 90 minutes. Liverpool enjoyed the first half-sighters of goal, but Mohamed Salah only managed an air-shot after exchanging passes with Mane and Sturridge was crowded out by defenders.

Matt Ritchie twice tested Mignolet from range with curling efforts, and although the Reds had more possession in the opening stages, they were struggling to break down Newcastle‘s two banks of four.

Sturridge, enjoying influencing the game on a rare start, had a penalty shout for handball turned down when a shot was blocked, before Mane blasted over from a narrow angle.

Then came a spell of 10 seconds which encapsulated the Reds’ recent attacking travails; from a corner, Gini Wijnaldum struck the near post with a clever flick, Dejan Lovren‘s shot on the rebound was blocked on the line and Mane swept the third opportunity wide.

The frustration didn’t last long this time though, thankfully: with the next period of possession, Philippe Coutinho cut in from the left channel past former Red Jonjo Shelvey and bent a tremendous curler inside the near top corner to give his side the lead.

If that was one familiar sight for the Reds though, so too was the next event in the match: the centre-backs split asunder by a simple through pass, and ridiculous fortune resulting in an equaliser.

Joel Matip sprinted back to challenge Joselu who had run through one-on-one, but the last-ditch tackle only ricocheted off the striker’s shins, flew past Mignolet and found the bottom corner for 1-1 at the break.

After the restart, it was more of the same: possession for the Reds and a spate of missed chances.

Sturridge looked to capitalise on a defensive error, but his shot was saved and Salah skied the rebound with the entire goal to aim at.

Atsu then got in behind Joe Gomez, only for Matip to make another recovery challenge—this one thankfully not resulting in an effort on target for the home team—before Coutinho hit the wall from a free-kick and Sturridge’s bicycle kick drifted harmlessly wide.

On the hour, Klopp switched to a 4-2-3-1, Salah central with Coutinho on the left, as the Reds sought to create more clear-cut opportunities on goal.

Salah fashioned one or two moments of danger with through passes, but a frustrating period ensued, prompting Klopp into a double sub to bring on Firmino and Dominic Solanke for Sturridge and Mane.

The Reds pressed on and Lovren’s header off a corner was cleared off the line by Shelvey, but it was a brute force offensive from Klopp’s side rather than playing with conviction in a plan to open the opposition up.

Alex Oxlade-Chamberlain was the late final sub, but diving headers sent off target from both he and Solanke were the best chances the Reds could muster.