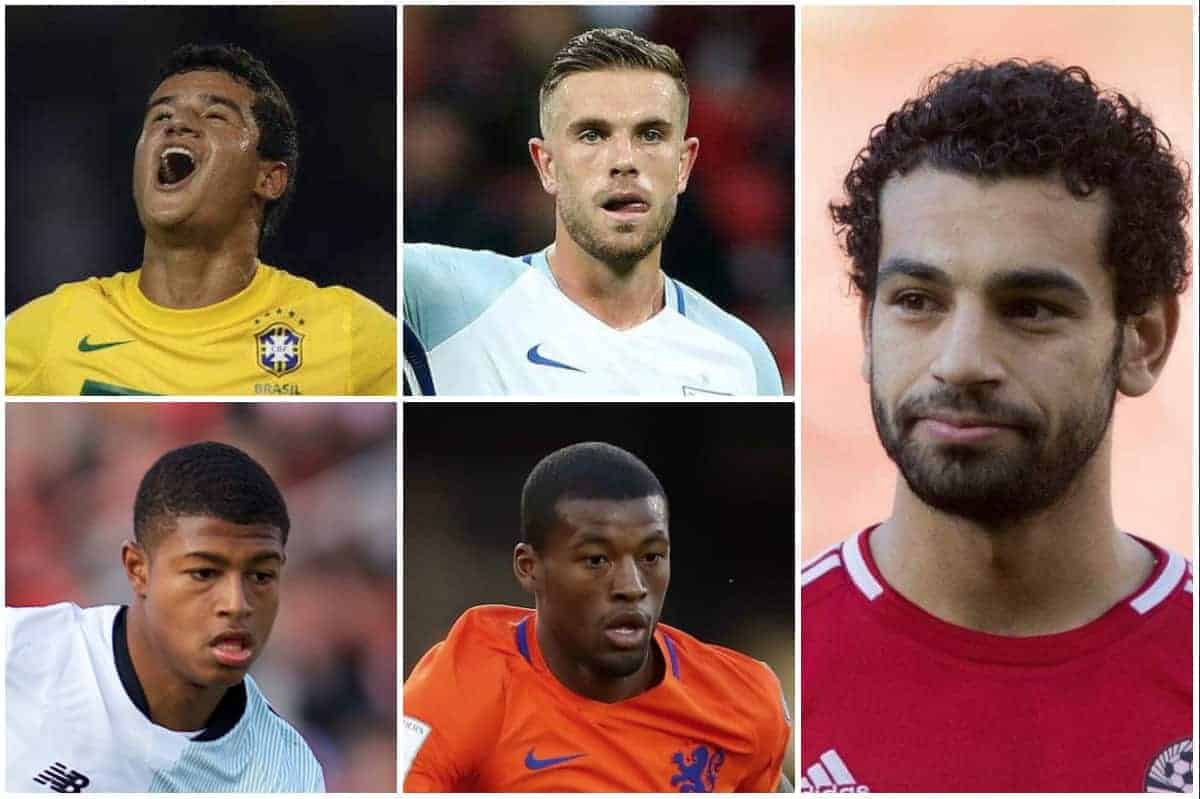 We round up how Liverpool’s internationals performed in the second round of October clashes, as World Cup and European U21 qualifiers continue.

Jurgen Klopp‘s first-team squad have now finished up their duties with their respective nations, reconvening at Melwood to prepare for Saturday’s clash with Man United.

For some, the return will be welcome, after failure to qualify for the World Cup in Russia next summer, and for others, it will provide an opportunity to build on a successful break.

In Mohamed Salah‘s case, it will be the latter, with the winger crowned King of Egypt after his exploits in Sunday’s qualifier at home to Congo.

Salah scored twice, including a nerveless last-minute penalty, to seal a 2-1 win and a place at the World Cup for the first time since 1990.

“That was to me a dream come true, whether as a footballer or an Egyptian citizen and fan,” he told reporters after the game. “I’m proud I made the Egyptians happy today.”

Brazil had already booked their flights to Russia by the time they took on Chile on Wednesday, but Philippe Coutinho was still on top form in a 3-0 win.

The 25-year-old was instrumental in Gabriel Jesus’ brace, shining when dropping deeper before being replaced by Roberto Firmino after 87 minutes.

Jordan Henderson also took to the field safe in the knowledge that his side had qualification secured, playing the full 90 minutes in England’s drab 1-0 win over Lithuania.

Daniel Sturridge was a late substitute, making an 18-minute cameo, while Alex Oxlade-Chamberlain was unused.

Both Simon Mignolet and Divock Origi also remained on the bench throughout as Belgium won 4-0 at home to Cyprus, despite their side having also made it to Russia.

Georginio Wijnaldum was less successful than his team-mates, however, with Netherlands failing to secure the seven-goal victory they needed over Sweden in order to qualify.

The midfielder played 71 minutes in a 2-0 win, replaced by Everton‘s Davy Klaassen after touching the ball just 31 times.

While Danny Ward was an unused substitute, Ben Woodburn came on for the final 25 minutes of Wales’ all-important clash with the Republic of Ireland, but failed to find the spark needed.

And Andrew Robertson‘s Scotland were similarly unsuccessful in their bid to make the World Cup, with the left-back playing 90 minutes in a 2-2 draw with Slovenia.

Another who will not be at next year’s tournament is Ragnar Klavan, with Estonia failing to make it out of Group H, as the centre-back played the full 90 minutes in Tuesday’s 2-1 loss to Bosnia & Herzegovina.

Emre Can played the full 90 minutes in Germany’s 4-0 win over Azerbaijan, capping a perfect qualifying run that saw them win all 10 of their games.

The 23-year-old was imperious in the No. 6 role, with more touches of the ball than any other player (141), as well as making three tackles and 126 passes with a success rate of 89.7 percent.

And Can polished off the victory with a sensational strike from 25 yards—his first-ever goal for Germany.

More troubling was the news that Sadio Mane picked up a serious hamstring injury in Senegal’s 2-0 win away to Cape Verde on Saturday, missing the next six weeks of action.

That this came after the winger played 89 minutes in Praia casts a damning view over Senegal manager Aliou Cisse.

Rounding off Liverpool’s senior internationals, Dejan Lovren played the full 90 minutes in Croatia’s 2-0 win over the Ukraine on Monday night.

Zlatko Dalic’s side now face a two-legged play-off in November to determine whether they qualify for the World Cup.

After their impressive 3-1 win over Scotland last Friday, both Trent Alexander-Arnold and Joe Gomez were unused as the England U21s took on Andorra on Tuesday evening.

Dominic Solanke came off the bench, however, replacing Dominic Calvert-Lewin to play the final 11 minutes in a 1-0 victory, with Everton midfielder Tom Davies scoring the only goal.

Marko Grujic played the full 90 minutes as the Serbia U21s sealed a 3-2 win over Russia, unsurprisingly picking up a booking.

And Corey Whelan also remained on the field throughout as the Republic of Ireland U21s produced an impressive display to defeat Israel 4-0, with the left-back also cautioned.

Kamil Grabara was again left out as the Poland U21s sealed a 2-0 win over Lithuania on Tuesday, however.

Finally, Rhian Brewster played a starring role as the England U17s’ impressive youngsters won 3-2 over Mexico in their second game at the U17 World Cup in India.

The 17-year-old striker beat Cesar Lopez with a curling free-kick from range on 39 minutes, adding to his pair of assists from the previous 4-0 win over Chile.

Phil Foden and Jadon Sancho scored the other two goals, with Brewster playing the full 90 minutes in an excellent display in Kolkata.

England are now through to the tournament’s round of 16, ensuring Brewster stays away from Merseyside until at least October 17.