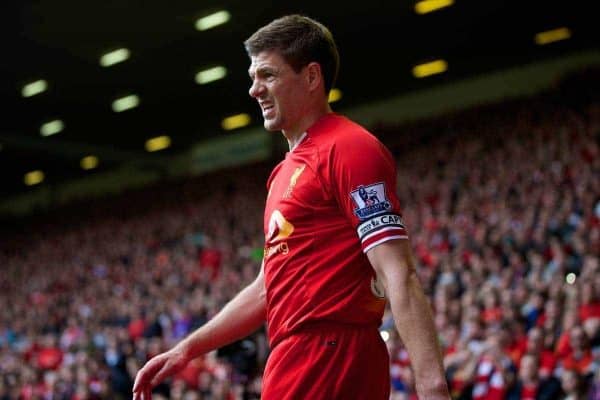 Steven Gerrard has admitted his failure to win the Premier League with Liverpool has prompted him to “try to make amends for it” as a manager.

The legendary midfielder secured almost every club honour possible, but the one medal that eluded Gerrard throughout his career was arguably the biggest.

Most scarring for Gerrard was the most recent, with the 37-year-old blaming his slip in a 2-0 defeat to Chelsea for the demise of the Reds’ challenge under Brendan Rodgers.

Having retired in 2016, following a short stint with LA Galaxy, Gerrard is now manager of the Liverpool U18s.

And speaking as he received the 2017 Legend of Football award on Monday night, he vowed his failures as a player would spur him on in his new career.

“It’s no secret that I had a lot of lows along the way,” explained.

“I think I went on to achieve the highs because of the pain and how much I had to suffer through the lows.

“That helps you get up, start a clean slate and drives you on to achieve the highs.

“I’ll never be able to let go of the one low and that was not winning the Premier League; I still feel it was cruel and still take it very personally.

“That’s one of the reasons I haven’t given up on the game and why I’m still going to try to make amends for it along the way.”

Gerrard has enjoyed a positive start to life with the U18s, unbeaten after six games, winning three and drawing three, as well as a win and a loss leading the U19s in the UEFA Youth League.

The young Reds have scored 20 goals over those eight games, but have also conceded 13, and Gerrard admitted he is still learning on the job.

“I feel like I’ve got a lot of knowledge in the game and a lot of people can benefit from that,” he continued.

“I’m trying to do my bit at the moment at the academy. I’m really enjoying the role.

“The club have been very supportive of it. I’m making tons of mistakes along the way but I’m learning my trade.

“Hopefully one day I’ll manage and coach at the top and be able to add to a lot of the highs I had in the game.

“That’s the reason I’m doing it. That’s what I grew up wanting to be—be around football and be around the highs.

“The lows are worth going through to achieve the highs. I’m in a good place, I’m happy. I’m really delighted to be at the academy helping these young kids.”

Having set his sights on a role in the Anfield dugout in the long term, the hope will be that Gerrard’s career as a manager is as successful as his time as a player—or even more so.