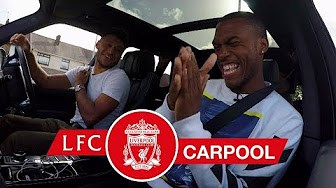 Driving around the city there’s plenty to see in Liverpool—but all eyes were on the inside of the car this time around.

The four Reds bring some humour, insight and questionable singing standards as they headed from Anfield to Melwood, with new signing Oxlade-Chamberlain behind the wheel.

Sturridge was clearly the ringleader with his interesting interview technique—to Oxlade-Chamberlain’s barber, of all people—but each get in on the act with a few jibes and jokes.

Gomez’s dress sense is questioned, Clyne’s availability on the dating scene is advertised and the use of hair picks discussed in a meandering, beyond-the-usual look at footballers’ lives.