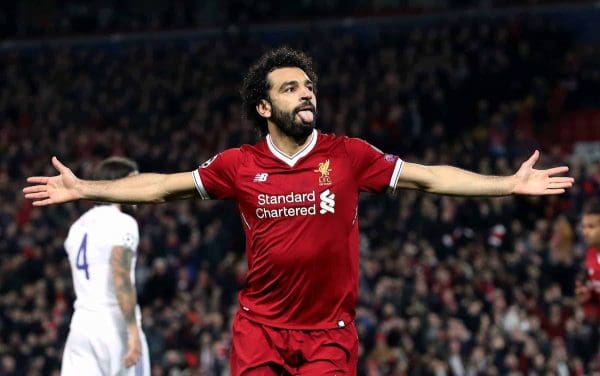 The best of the photos from Liverpool 3–0 Maribor

Liverpool edged closer to qualification for the Champions League knockout stage after eventually running out comfortable winners against Maribor.

Having secured a first Champions League proper win in three years against the same opponents last time out, the Reds now had a big opportunity to take a commanding position in Group E.

Jurgen Klopp’s side took full advantage of that chance by eventually cruising to a 3-0 win at Anfield to become standalone leaders of the group and move within reach of the last-16 stage.

Klopp shuffled his pack as he made four changes to the starting lineup at Anfield, which included a welcome start for Alex Oxlade-Chamberlain.

Klopp’s side predictably controlled proceedings from the first whistle but couldn’t find a way through in a frustrating first-half – with Mohamed Salah among those seeing efforts denied.

But the pressure eventually told just four minutes into the second-half, when the lively Salah produced a delightful flick to convert Trent Alexander-Arnold’s cross, much to relief of everyone at Anfield.

James Milner had the chance to double the lead soon after, but the vice-captain saw his penalty tipped onto the post by Jasmin Handanovic – meaning the Reds have now missed all four penalties at Anfield in 2017.

Thankfully Milner’s miss didn’t prove costly as the crucial second goal did soon arrive on 65 minutes, with the vice-captain playing his part in an excellent goal.

Emre Can exchanged a clever one-two with Milner and curled a crisp finish into the bottom corner of the Kop End net, scoring once again in Europe two years and 10 days after he netted the first goal of Klopp’s reign in the Europa League.

Second-half substitute Daniel Sturridge later added gloss to the score-line and sealed victory once and for all, hitting home Alberto Moreno’s cross from close range to make it 3-0 in the last minute.

It was an excellent second-half from Liverpool, who stepped it up after the break just like against Huddersfield last time out, much to Klopp’s delight.

Next up for the Reds is a trip to West Ham on Sunday, when the Reds will look to sign off ahead of the international break with a third straight victory.