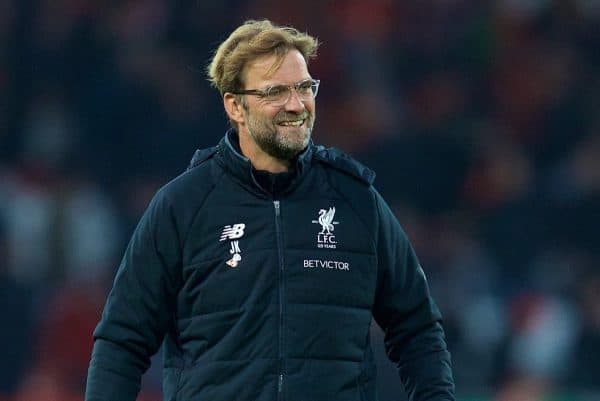 Can the Reds deliver another big Champions League win? – Liverpool vs. Maribor Preview

Liverpool take on Maribor in the Champions League group stage on Wednesday night at Anfield. Here’s all you need to know ahead of the game.

Premier League commitments make way for the Champions League this week, with the Reds looking to stay top of their European group.

Confidence is up after Saturday’s important 3-0 win over Huddersfield Town, with Jurgen Klopp‘s men producing a stirring second-half performance.

This Liverpool side are an outfit who thrive on momentum, but they just can’t seem to get a proper run of victories going at the moment.

Wednesday’s visit of Maribor is a glorious chance to back up the weekend win with another three points, albeit in a different competition.

The Reds are likely to have several changes in personnel, as Klopp gives certain fringe players a chance, and it will be interesting to see how they perform.

Attacking football, plenty of goals and, most importantly, three points are very much the order of the day.

Philippe Coutinho and Dejan Lovren might be available for game, with Klopp saying in his press conference: “They are both much better, but if it will be OK for tomorrow night I don’t know in this moment.”

Sadio Mane, Adam Lallana and Nathaniel Clyne are all definitely out, as Liverpool’s misfortune in the injury department continues.

Loris Karius should start in goal, as is the norm in the Champions League, and Trent Alexander-Arnold and Andrew Robertson could replace Joe Gomez and Alberto Moreno, both of whom are carrying knocks, at full-back.

It would be nice to see Alex Oxlade-Chamberlain earn just his second start for Liverpool, with the 24-year-old producing a number of promising cameos of late.

Daniel Sturridge should lead the line after opening the scoring against Huddersfield, and Klopp might see this as a good opportunity to rest Mohamed Salah or Roberto Firmino, or both.

Liverpool’s 7-0 win in Maribor on October 17 was the biggest away victory in Champions League history, and the Reds’ record away European triumph.

It was also Klopp’s most emphatic win since taking charge at Anfield two years ago.

Klopp urged Anfield to respect Maribor, insisting his side cannot afford to be complacent as they seek another victory:

“Respect is a big problem in general, after a 7-0 maybe people don’t respect Maribor any more.

“But we know how strong they can be. For this game the result is not even one percent of our analysis.

The match is part of BT Sport’s live Champions League coverage, with BT Sport ESPN and BT Sport Showcase showing the action from 7pm. Kickoff is at 7:45pm.

Our matchday live blog will get underway at the same time, with Ben Twelves the man to guide you through another night with the Reds.