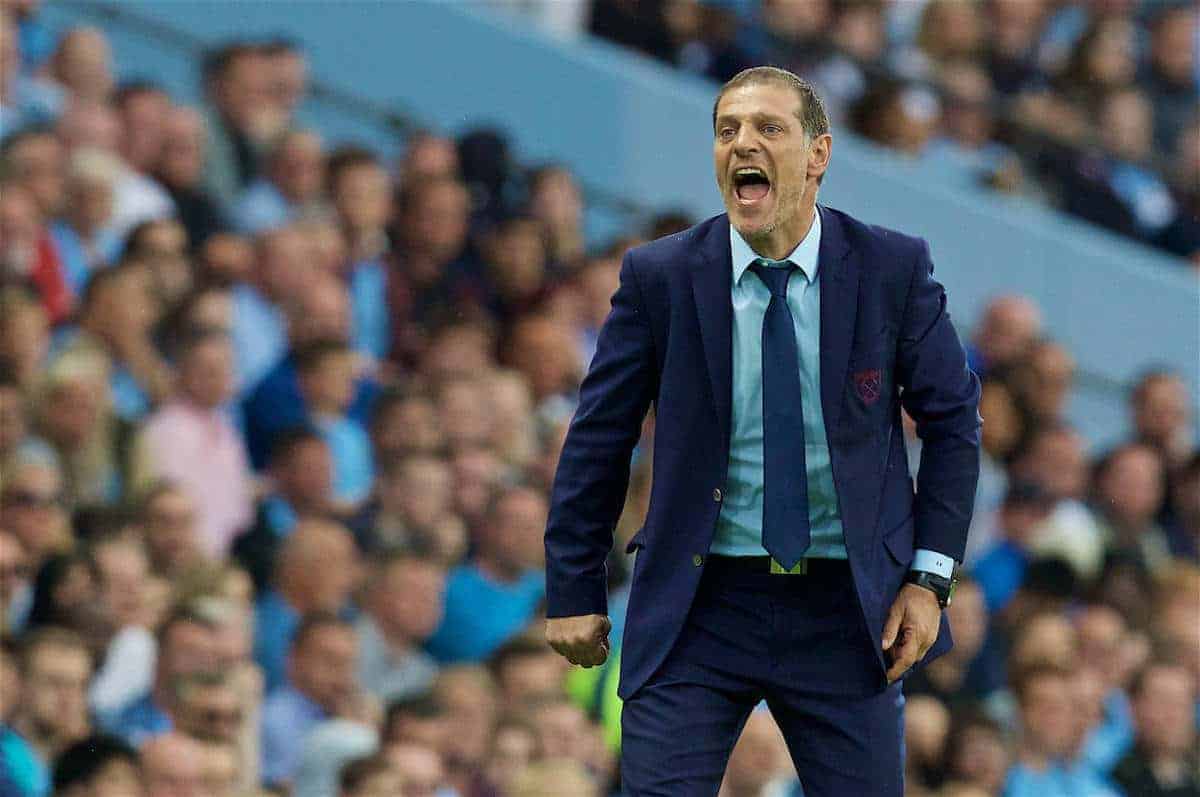 Weak defences are likely to lead to a share of the spoils between Liverpool and West Ham this weekend, according to a Hammers supporter.

The Reds take on Slaven Bilic’s side on Saturday evening, as they look to go into the international break with three wins on the bounce.

Matches between the pair are often entertaining encounters and the home fans will be up for it under the lights of the London Stadium.

Last season’s 4-0 win for Liverpool in east London was one of their most important victories of the campaign. More of that would do nicely for the Reds.

Ahead of Saturday’s meeting, we spoke to West Ham fan and Essex Echo reporter Danny Rust (@Danny_Rust10) to hear his thoughts on all things Liverpool and Hammers-related.

West Ham are 11th in the Premier League – how happy are you with their start to the season?

A lot of people have been saying that West Ham are in crisis, but they’re not.

If you look at the last nine games in all competitions, they have only suffered two defeats. One of those was against Tottenham, who have made an excellent start to the season, and the Hammers nearly staged a late comeback. The other was a big loss to Brighton.

West Ham would have been hoping to have started the season better, but they have been playing catch up from the very start of the season.

Playing your first three games away from home was never going to be easy, especially when those games are against Man United, Southampton (new manager, looking to prove a point to their new boss etc) and Newcastle United (on a high after winning promotion).

Things could be going better, but I expect West Ham‘s results to improve sooner rather than later.

Do you still have faith in Slaven Bilic, or is his time up?

I still believe that Slaven Bilic is the right man for the job. There is no doubting that he is a good manager – we saw that when he was the boss of Croatia and stopped England going to Euro 2008.

He wears his heart on his sleeve and is really passionate about the club. Last season was difficult because of the move to the new stadium, but his first season in charge was one of the best the Hammers have enjoyed in recent history. David Sullivan and David Gold said that the move to London Stadium would result in the club bringing in world-class players.

In their first season at their new home, however, Bilic could only bring Simone Zaza and Jonathan Calleri in on loan as his attacking acquisitions. They only mustered one deflected goal between them.

He hasn’t been backed well enough in the transfer market, in my opinion. That world-class player still proves elusive.

Sullivan and Gold are known for sticking with their managers. Since taking over in 2009, they have only sacked one, and that was Avram Grant after the club had already been relegated!

Sam Allardyce was allowed to run down his contract and I think the same will happen with Bilic, because his current deal expires at the end of the season. With the resources he has been given, I think Bilic has done a decent job.

Who have been the Hammers’ three best players so far this season, and why?

He hasn’t played regularly, but Declan Rice has shown he has immense potential. He has great composure and, at 18, he has plenty of time to improve. When he has featured, he has been one of West Ham‘s better players.

Although the Hammers’ defence has been poor this term, bringing in Pablo Zabaleta on a free transfer was a shrewd bit of business. He has vast amounts of experience and he wears his heart on his sleeve, which the fans love.

The best is yet to come from Javier Hernandez, but he has also been good so far this term. West Ham fans are hoping he will prove to be the first Hammers player to score 20 goals in a season since Tony Cottee.

How is life at London Stadium now? Does it feel like home?

After so long at Upton Park, London Stadium still doesn’t feel like home and I don’t think it ever will. At Upton Park, the supporters were so close to the pitch, whereas they are now miles away.

Being so far away from the pitch has made it difficult to create the same atmosphere as Upton Park. There was a great atmosphere in the wins over Tottenham and Chelsea last season, in the Premier League and League Cup respectively, but other than that, no other game stands out where it felt like home. A string of good home results and pleasing performances will go a long way to changing that, but I don’t think it will ever match Upton Park.

What have you made of Liverpool’s start to the season?

It’s a tale of two halves for Liverpool. With the likes of Philippe Coutinho, Sadio Mane, Roberto Firmino, Daniel Sturridge and Mohamed Salah, they have some of the best attacking players in the Premier League.

But the display at Tottenham shows that Jurgen Klopp has still not improved Liverpool’s defence enough, and Simon Mignolet is not good enough to be Liverpool’s first-choice goalkeeper.

Going forward, they have looked very good at times, but defensively, they have been poor.

Both teams are struggling in defence. West Ham have conceded too many goals so far this season, while Liverpool have also been poor and are lacking confidence at the back.

Dejan Lovren hit the headlines for being substituted before half-time at Tottenham, while Mignolet remains a worry in goal.

I think due to both defences being poor, the team that wins the midfield battle will go on to collect all three points.

Georginio Wijnaldum has been superb for Liverpool. He is able to cover the whole pitch and makes the Reds tick. If West Ham allow him time on the ball, he can hurt them by playing a killer pass. He also chips in with goals.

The likes of Mark Noble and Cheikhou Kouyate will need to keep him quiet.

If you could put one Liverpool player in the West Ham team, who would it be, and why?

It would be Coutinho or Mane, but with them both being injured, I would say Wijnaldum. He does everything you want in a central midfielder – he defends, is confident on the ball, cuts out attacks, has good passing ability and scores goals.

Due to how poor both back-lines are at the moment, I’m sure there will be goals. I will go for a 2-2 draw.