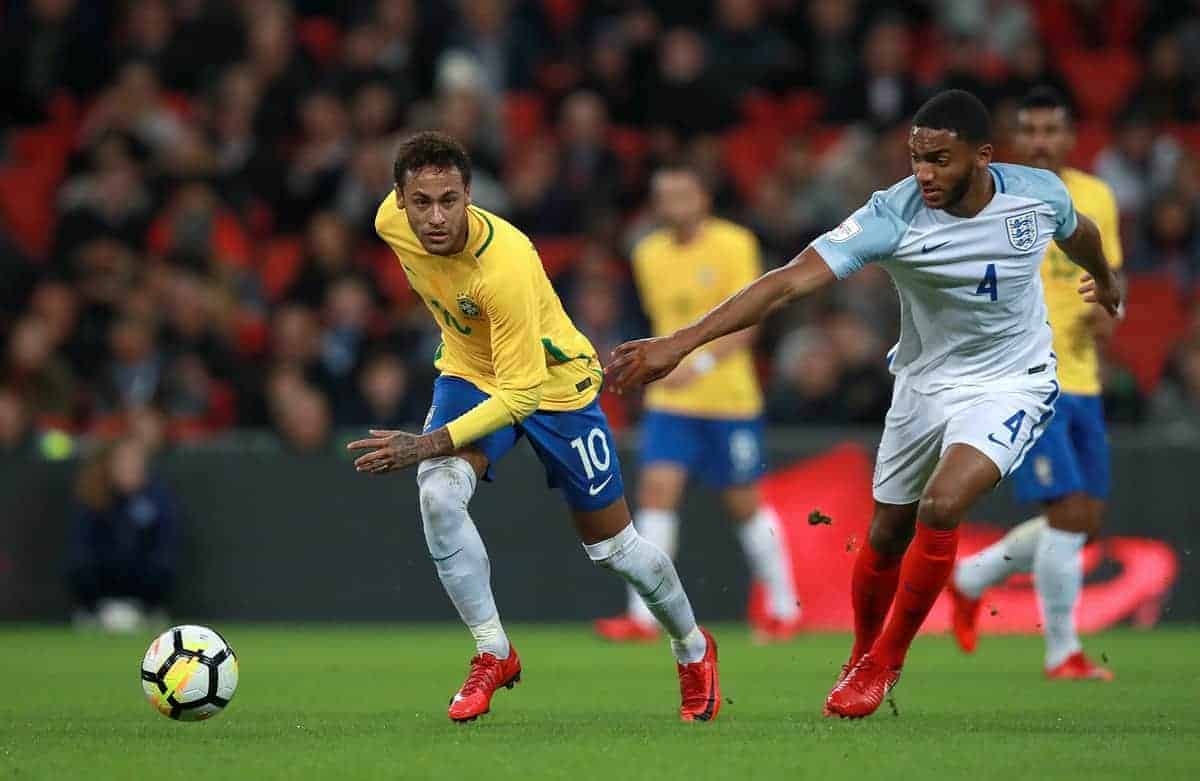 Four Liverpool players were in action at Wembley on Tuesday evening as England held Brazil to a goalless draw, with Joe Gomez taking man of the match.

Gomez made his first senior England start on the right of Gareth Southgates’s back three and was tasked with handling the world’s most expensive player, Neymar.

Reds’ teammate Philippe Coutinho was also among his opponents as he made his comeback from injury.

He had a glimpse of goal early in the second-half when Neymar poked the ball through a tight England back line but he was always stretching and could only hit it onto the legs of Joe Hart.

England, with Gomez particularly impressive, produced a strong defensive display to keep out the South Americans.

There were a few moments of hesitation from the 20-year-old which allowed Jesus to get in behind and one well-timed run off the shoulder gave the Brazilian an opportunity to bring the ball down in the box. Gomez recovered well and though his challenge left Jesus in some discomfort, it was a fair one.

On a whole, it was a composed performance from the Liverpool youngster and he was certainly not out of his depth at senior level – with his Man of the Match award testament to that.

Dominic Solanke, who received his first senior England call-up, and Roberto Firmino came on for the final 15 minutes for each side.

It was 20-year-old Solanke who made an immediate impact – winning the ball in midfield and beating two players before being pulled down just outside the box.

He then linked up well with Tammy Abraham on the counter-attack and was almost through on goal were it not for a last-ditch interception.

Firmino didn’t make as much of an impression but he made several dangerous runs and were it not for a superb interception from Gomez, he may have been through on goal with four minutes of normal time left to play.

The best chance of the game fell to Solanke in the 89th minute when Ashley Young’s cross fell to his feet at the back post.

It took him by surprise and he couldn’t get the ball out of his feet with his first touch – a hesitation which allowed goalkeeper Alisson to desperately claw the ball away.

Overall, England’s young duo were particularly impressive and have certainly staked a claim for a place in Southgate’s next squad.

Speaking to ITV post-match, Gomez said: “For someone like me it is a great experience. We are happy with the clean-sheet and for me to play and put in a good shift, I am happy.

“I am just trying to improve each day and hopefully more opportunities can come.”

The best news of the night though will be that Coutinho and the other Reds’ appear to have come through the match unscathed.

The other good news? No international football until March!