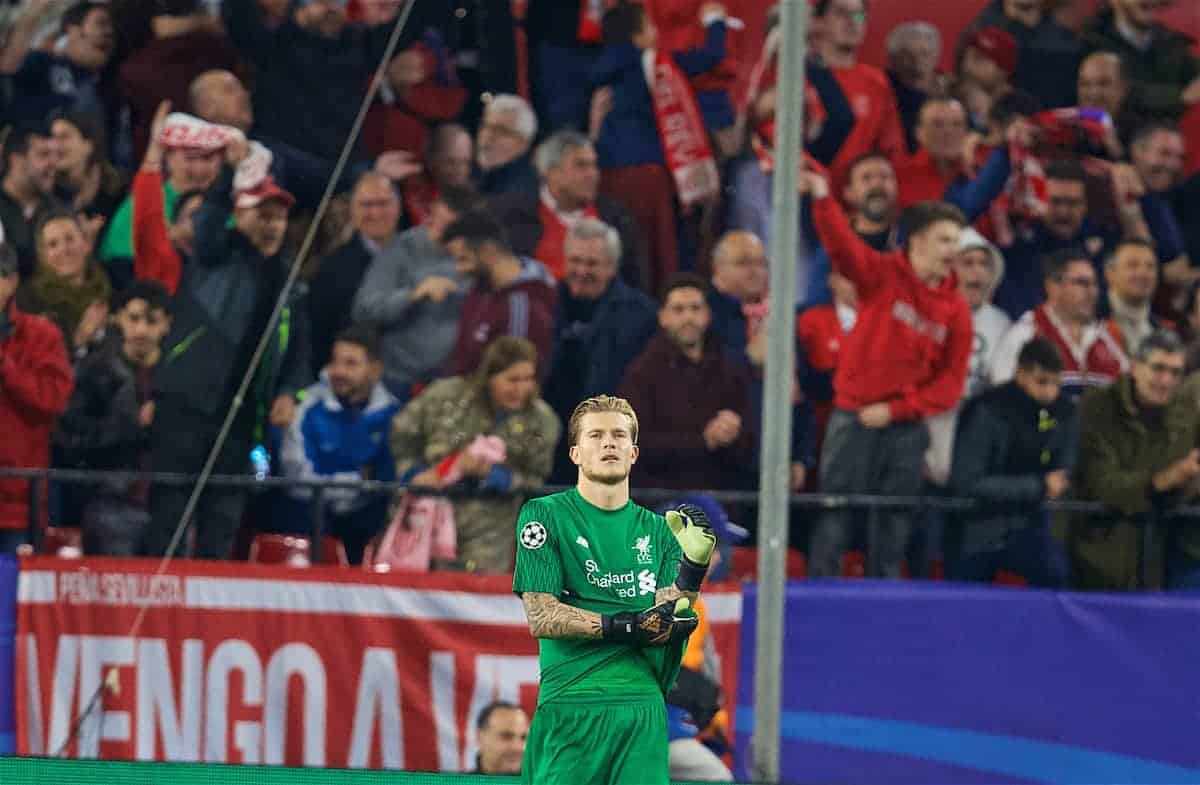 The media assessed Liverpool as “lacking bottle” and criticised a lack of leadership as they surrendered a three-goal lead to draw 3-3 with Sevilla.

A woeful second half saw Jurgen Klopp’s side carelessly chuck away a golden opportunity to seal last-16 qualification and win Group E.

Roberto Firmino’s brace and Sadio Mane catapulted the Reds into a 3-0 lead at the break, and seemingly on the verge of a fantastic victory after a stunning first half.

But Klopp’s men completely collapsed in a shambolic second period—not for the first time against Sevilla—undoing all the good work as Wissam Ben Yedder and Guido Pizarro sealed an unlikely fight-back.

As good as Liverpool were in the first half, it was completely amateurish not to see the game out from such a commanding position, with management and players both to blame.

Here’s how the media assessed a crazy and ultimately disappointing night in Spain. Journalists reflected on a chaotic night, offering varying conclusions to the result…

The Liverpool Echo’s Andy Kelly assessed it was a good result, but felt the manner of it was one which “will have hurt momentum”:

“This was a very bad way to get a good result.

“This latest surrender, though, will have hurt the momentum that has been built in recent weeks.”

The Mirror’s Liam Prenderville felt the collapse illustrated why Liverpool “won’t reach the next level”:

“Once Sevilla had got one, the comeback was on and the third goal wasn’t even a surprise. This is why they’ll never go on to the next level.”

And Echo colleague James Pearce bemoaned the wasted chance to take some pressure off the gruelling fixture schedule:

“But Klopp should have had the luxury of a dead rubber four days before the Merseyside derby and now that won’t be the case.” Pearce was among numerous journalists to question the Reds’ “maturity,” feeling Klopp’s men “lost their heads”:

“But the second half made a mockery of claims that they have truly addressed their defensive issues. Where was the game management? Where was the maturity? Far too many lost their heads.”

The Telegraph’s Chris Bascombe assessed the Reds as too brittle under pressure, and questioned where improved composure went:

“There was much to reassure about the brilliance of Liverpool’s attacking, but concern about how brittle they are under pressure.

“The defensive fortitude noted in recent weeks evaporated in a hectic spell. The poise the Liverpool manager had observed in the last four games gone.”

The Independent’s Mark Critchley noted the Reds’ ‘lack of confidence’ when required to shut up shop:

“This Liverpool side, however, rarely looks confident when needing to protect a slim lead for a long period of time.”

The Independent’s Miguel Delaney believes the collapse could have big negative impact on the direction of the Reds’ season:

“It still feels like this will have a bigger effect on the season, because of the sense Liverpool needed the confidence from the defence staying strong to secure a big win when under pressure; to keep that run going; to offer further reassurance to the players that recent training ground work is paying off.

“That will be the deeper longer-term frustration for Klopp once the great frustration of the actual result wears off.”

ESPN’s Mark Ogden said the “Fab Four” were let down by those behind them:

“Liverpool could cause some serious damage to the best teams in the Champions League this season if they can keep their “Fab Four” attacking unit fit and healthy, but at some point, even their heroics will be unable to make up for the team’s on-going defensive problems.”

The Guardian’s Andy Hunter noted the absence of responsibility to take possession, assessing “the visitors’ bravery on the ball and clinical edge deserted them”:

“Defensively, they were found wanting again yet it would be remiss to apportion blame solely at the feet of his defenders. The visitors’ bravery on the ball and clinical edge deserted them after the restart.”

Pearce simply assessed “an alarming lack of bottle” from Klopp’s side:

“But from a position of complete control, Liverpool fell apart. In a testing environment, there was an alarming lack of bottle.”

Ogden was critical of the Reds’ midfield in this regard, bemoaning a lack of understanding in how to control games:

“Klopp’s problem is that he does not possess the midfielders to control a game and shut it down when required.

“Henderson, Wijnaldum and Emre Can are all players with similar qualities, but none can orchestrate play and control it like Gundogan or Alonso.”

Meanwhile, This Is Anfield’s Karl Matchett was particularly critical of Jordan Henderson—assessing the skipper “didn’t do a good enough job” in protecting the back four:

“That imposing presence should have come from captain Jordan Henderson, but the skipper was nowhere to be seen as Sevilla scythed through the Reds’ soft centre over and over.

“Misplaced passes, chasing out of position to win the ball, a succession of free-kicks conceded and no real protection of the defence whatsoever: once more Henderson simply didn’t do a good enough job as the shield.”

Alberto Moreno was heavily criticised, but reporters also apportioned blame to Klopp for not being more proactive…

This Is Anfield’s Chris Williams thought Klopp was ultimately let down by his players:

“Must be tearing his hair out, individual errors by his players (again) have let a valuable win slip away, this time in the Champions League.”

But Kelly believes Moreno is now on his last chance:

“Moreno has enough credit in the bank this season to forgive this aberration. But no more please, Alberto. No more. This is your final chance.”

Writing for Goal, Melissa Reddy criticised Klopp for not withdrawing Moreno earlier, noting “a lack of leadership from both the touchline and the pitch”:

“Moreno’s composure had long gone by that point, and he wasn’t alone in this regard.

“He should have been replaced sooner and more leadership was needed both from the touchline and on the pitch.”

Taking a more composed view, Matchett explained why Moreno should not be written off and called for the left-back to “bounce back quickly”:

“Writing him off as back to his old tricks would be ignorant and stupid.

“It was a poor display, yes, and a costly one, but it’s now up to the left-back to bounce back quickly and show the form which earned him his place back in the team.” “At Sevilla he showed the altogether more ruthless side of his game, a real poacher’s instinct to score twice and claim one assist as the Reds ran riot in the first half.

“We know about Firmino’s strength outside the box, his link play and his work rate, but inside the area he’s also a big threat and at Sevilla he showcased just how important he is in that regard, too.”

“Another away game, another almost invisible performance from the Dutchman. Emre Can might have been a better option but in fairness few were complaining at half-time.”

Williams was critical of Emre Can, labelling the German’s late cameo “an appearance to forget”

“Trusted by Klopp to shore up the defensive element of the midfield, completely switched off in the 93rd minute and let his man score the gut-wrenching equaliser—this after he missed a good chance to make it 2-4. An appearance to forget.”

“The German was beaten three times but can still be largely very happy with his performance; he made big saves and was brave when called upon, a much better display than he has offered at times.”