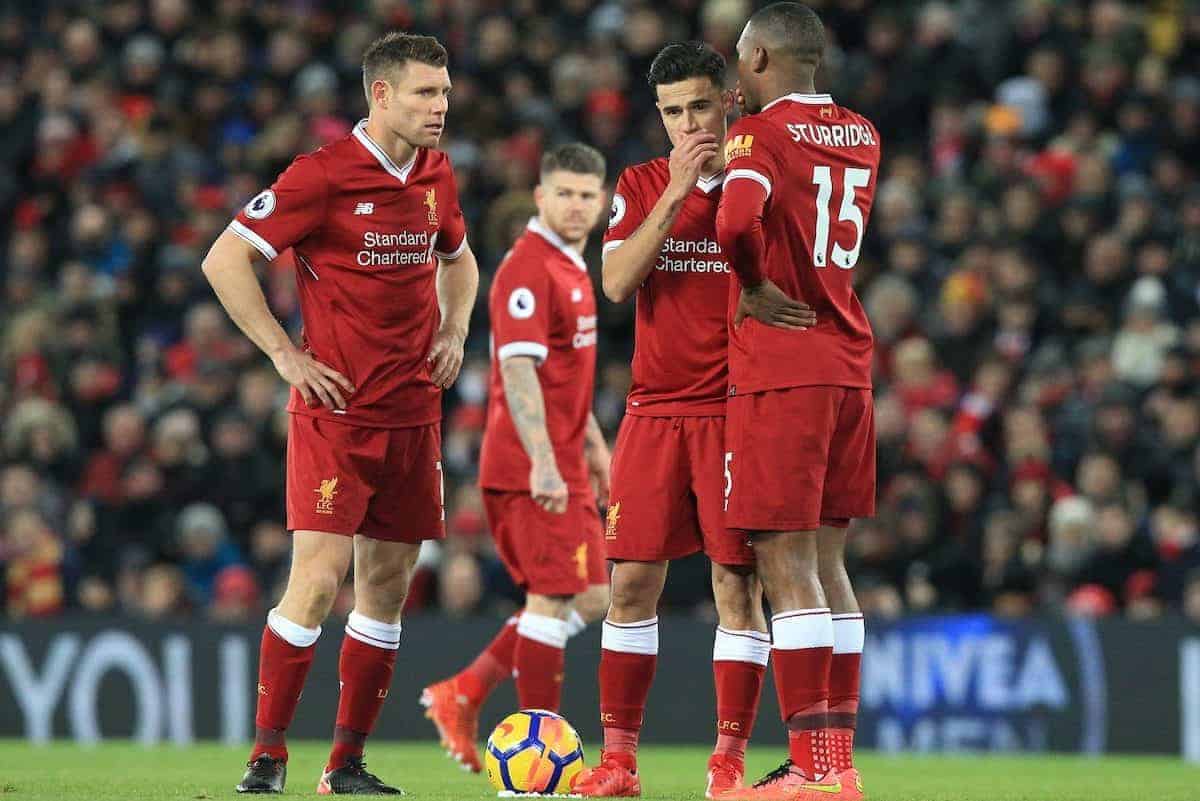 Liverpool drew from a winning position for the second time in a week, as a mixed bag of performances saw a 1-1 draw at home to Chelsea.

Had a busy period in the first half where he was forced into action a number of times.

He made a routine save from an Eden Hazard effort before going down well at the feet of Danny Drinkwater on a one-on-one situation.

Tipped a Davide Zappacosta shot over the bar, and managed to clear a couple awkward back-passes clear of danger.

Might be blamed in some quarters for allowing Willian’s chipped effort over his head, but the execution of the shot (or was it a cross?) was perfect and there was little he could do.

Maybe his initial position could have been better, but not many ‘keepers will have expected Willian to do what he did with such accuracy.

Sprints up and down the right like an attacking full-back, but has the defensive traits of a centre-back.

He showed these today, and though his crossing was hit-and-miss, he was solid in his defensive duties and performed well enough to link the play when needed.

Returned to the side to resume his role as the club’s first-choice centre-back.

The decision was made easier for Jurgen Klopp by an injury to Dejan Lovren, but Matip could be set to retain his place in the side for the foreseeable future.

He did little wrong, and didn’t have chance to do much beyond this, but he did win a couple of aerial duels during the game. Provides good balance at the back as the club’s only left-footed centre-back. Is enjoying a good run in the side and didn’t really put a foot wrong.

Is proactive in his challenges, stepping out of the line to put out fires, and no-nonsense with his clearances when required.

He made 11 of these throughout the game, and passed the ball well for the duration.

This was the type of performance his manager will have been hoping for having kept him in the side after his display in Seville.

He made a couple of important interceptions, and his pace was vital on a couple of occasions as Chelsea broke from Liverpool corners.

Cleverly played Hazard offside in one dangerous situation towards the end, and contributed a total of eight tackles in an excellent defensive display.

Struggles in the deep role, but we already know this. Other than that he showed good energy, even though his closing down in advanced areas sometimes left Hazard free.

The Belgian danced around him at one point in the first half, and generally had the beating of him during the game.

Managed one shot but hit it straight at Thibaut Courtois, and when presented with a good opportunity to shoot in the first half he didn’t act quickly enough.

It was an improvement on Sevilla, but still not quite good enough.

Made the odd important intervention in defence, and most of his passes found their man, but there were a couple of occasions where he was unable to tune into the same wavelength as those around him.

The stats might show him in a good light, but in the very cold light of Anfield he looked off the pace and out of sync.

His mis-hit shot at the Anfield Road end summed up his workmanlike but ineffective performance.

Was in and out of the game, but when he’s in games he looks like he can make something happen.

This was the case as he came in from the left along the edge of the area in the build up to Mohamed Salah‘s goal, nudging the ball on to Alex Oxlade-Chamberlain who sent it through to the Egyptian.

This edges him ahead of the likes of Milner and Henderson in the ratings, but he’s going through a bit of a rough patch at the moment himself. Was the liveliest Liverpool attacking player, and eventually got the goal his performance deserved.

Had spent much of the match creating his own chances, but when one was made for him he finished it well.

Moved to the centre and held the ball up well against the Chelsea defence. Had another chance late on but let the ball get away from him.

Came into the side for Mane and performed reasonably well, setting up the goal for Salah and working hard up and down the left-hand side, and helping out in midfield when needed.

It would be interesting to see him play more central, perhaps ahead of Milner, but for now he’s doing a decent enough job for the team in wide areas.

His holdup play was good early on but he couldn’t find the type of chance he needed to get himself on the scoresheet.

Managed to get a couple of shots away but never really threatened as we know he can.

Worked well off the ball but couldn’t get on it enough, and looked disappointed to be subbed with just an hour gone. Looked better than both Milner and Henderson in the short time he was given. Helps his full-back and is aware of opposition movement. The manager made five changes from the midweek draw in Seville but the two players who came in for the most criticism, Moreno and Henderson, retained their places.

Moreno shone but Henderson was unconvincing. Milner was ineffective in midfield, but his decision to stick with Gomez at right-back was a good one.

The tactical change he wanted to make later in the game would have—according to the manager himself—prevented the Chelsea goal, but he could have changed the shape first before making the substitutions.