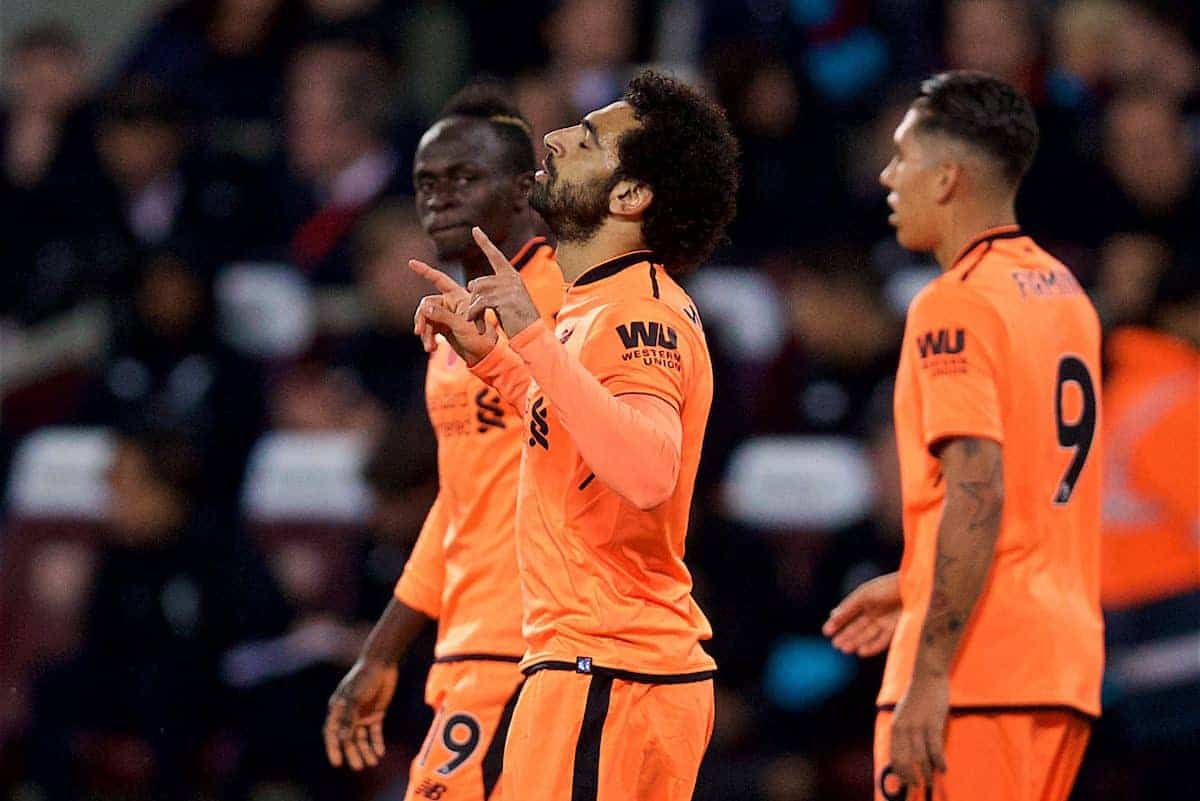 Liverpool cruised to a third straight victory running out 4-1 winners against West Ham at the London Stadium, much to the delight of supporters.

With the Reds having rediscovered winning form with back-to-back Anfield victories, ‘same again’ would have been Jurgen Klopp’s message ahead of the London Stadium trip.

The boss watched on as his side delivered perfectly in the capital, where Mohamed Salah‘s brace and strikes from Joel Matip and Alex Oxlade-Chamberlain ensured Manuel Lanzini’s goal counted for nothing to seal all three points.

It was a fine performance from Liverpool, and one that ensures forward momentum is maintained going into the international break.

Here’s how Kopites reacted to the resounding victory across Twitter and our forums.

There was excitement pre-match at the ultra-attacking lineup…

Mane starting after returning to training only this week, 2 weeks ahead of schedule. An unexpected but very welcome surprise that. #LFC

It was a happy surprise #Mane

Mane is a fucking machine. He was supposed to be back in 2/3 weeks. Unreal.

“Mane and Salah. In the same team. Goodnight West Ham.”

Wijnaldum, Oxlade, Mane and Salah all running at the West Ham defence will be fun.

Oxlade-Chamberlain probably operating as the shuttler in midfield. Could be good, this.

Love that Liverpool lineup. Mane back starting is mental, so is Mignolet captain & Oxlade-Chamberlain in midfield having not trained there.

Mané starts and Ox in midfield…. Jürgen must have found a worm hole to pause time, fit all that extra training they needed in last 2 days

Happy with LFC’s midfield. What is this?!

There was plenty of intrigue over Liverpool’s flexible formation…

We've seen glimpses of a 4-2-2-2 shape since the start of the season but it's never been quite as obvious as it is here.

Given Klopp has gone with a 4-2-3-1, it does feel strange he hasn't started with Sturridge. Could've thrived, especially given recent form

That’s how Matip can score from a corner then? #LFC ??

“THAT IS HOW YOU COUNTER”

Things never play out that smoothly with Liverpool though…

Poor by Gomez. Gets under the ball then out muscled by Lanzini.

But agony instantly turned to ecstasy as Oxlade-Chamberlain netted…

Relief followed when Salah netted his second to wrap up victory…

Stop allowing these to come back into the game.

Someone needs to take control of this and keep the ball. They've gone long ball so our press against their defenders will lessen.

Watching Liverpool defence defend is the visual equivalent of a hysterical car alarm going off.

Good sides do not get drawn into a scrap when they’re 3-1 up against opposition this poor. #LFC

Far too open atm. Just slow it down lads.

You got any other rejects you fancy sending our way, @ChelseaFC?

Find someone who smiles at you like Mo Salah smiles at a goal. #lfc

The final whistle blew and the three points were confirmed…

“Nice way to banish the memory of our last trip to London.Great stuff lads.”

Happy International Break …. said no one

“You can only beat what’s in front of you right? So… Well done boys”

Salah an unbelievable piece of business. Great win away from home. LFC 10 goals in 3 games conceding just 1 – climbing the hill

Really liked the new shape tonight. Credit to Klopp for getting creative with the attack.

Has Klopp turned it around? Let’s hope so!!! Massive performance from the lads. Get in!