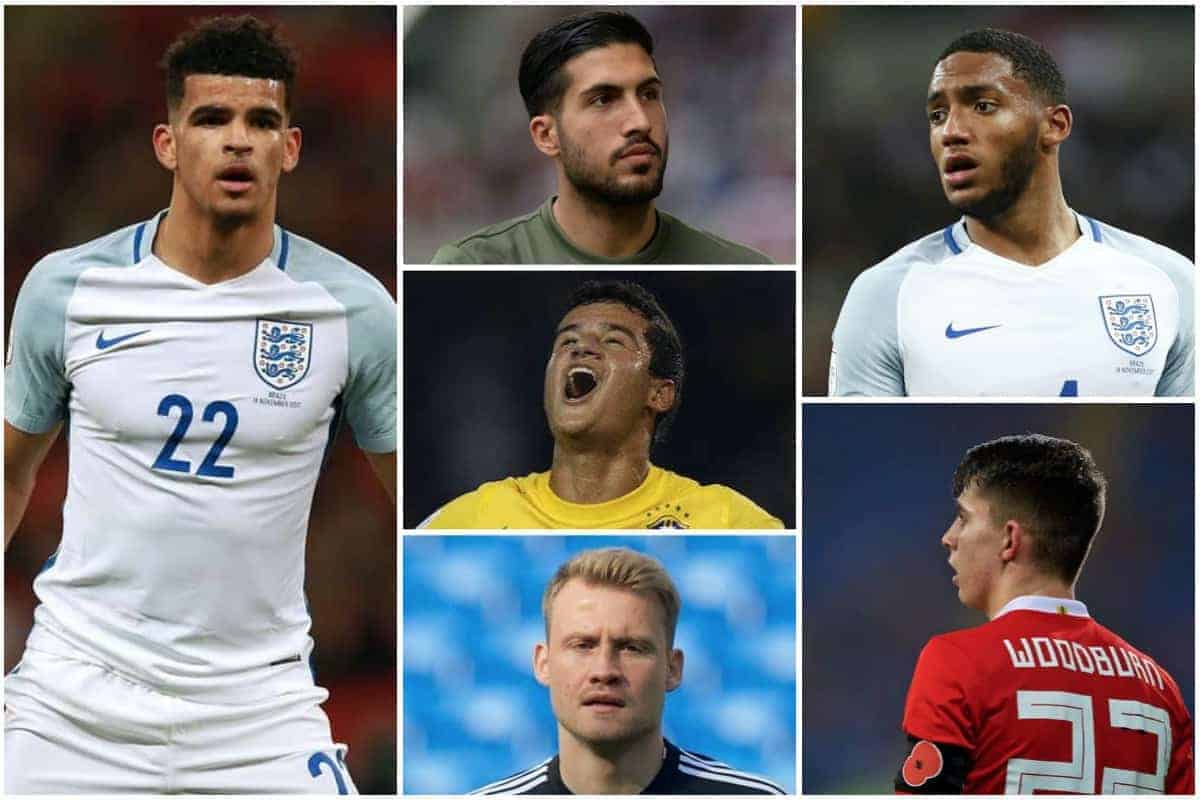 We round up how Liverpool’s internationals fared in the second round of November fixtures, as Dejan Lovren helped seal Croatia’s World Cup place.

Lovren became the last Reds representative to book a spot at next year’s tournament, playing the full 90 minutes in his side’s 0-0 draw with Greece on Sunday.

With Croatia having already won the first leg of their play-off 4-1, Zlatko Dalic’s Balkan outfit cruised to a place in Russia.

Elsewhere, Tuesday night brought a significant milestone for Joe Gomez, who made his full England debut in a 0-0 draw with Brazil at Wembley.

The 20-year-old started on the right of Gareth Southgate’s back three and shone, named Man of the Match for his performance, successfully shackling the dangerous Neymar.

Gomez’s Liverpool team-mate Dominic Solanke came off the bench in the second half, too, with the striker making his first appearance for the England senior side.

Solanke joined Tammy Abraham in a new-look attack, and the best chance of the night fell at his feet, but the No. 29 was unable to get his shot away from close range.

Philippe Coutinho was among Tite’s starting lineup for Brazil, and showed signs of sharpness after injury before being withdrawn on 68 minutes.

And Roberto Firmino came onto the field at the same time as Solanke, replacing Gabriel Jesus with 14 minutes remaining, but was unable to make an impact. In Cardiff, both Danny Ward and Ben Woodburn started for Wales in their 1-1 friendly draw with Panama.

For Woodburn in particular, this night was a major step forward, with the forward making his first start for his country at just 18.

While Ward was unable to keep a clean sheet, Simon Mignolet was more successful for Belgium, keeping Japan at bay in a 1-0 win that saw Divock Origi replace goalscorer Romelu Lukaku late on.

Emre Can took up an interesting role for Germany in their 2-2 draw with France, playing 83 minutes as a right-back for Joachim Low’s side.

The 23-year-old is eager to nail down a long-term role as a holding midfielder, and with his future up in the air this season, this utility-man berth could affect his decision.

Alberto Moreno made a triumphant return to the fold in Spain’s 3-3 friendly draw with Russia on Tuesday night, replacing Jordi Alba to play the second half in St. Petersburg.

This was Moreno’s first appearance for Spain since joining Liverpool in 2014, and only his fourth cap for his country.

He was unused in Spain’s first friendly of the November break, remaining on the bench throughout in a 5-0 win over Costa Rica.

Another player returning to the international fold this month was Marko Grujic, who made his first senior outing for Serbia in over a year in Tuesday’s 1-1 friendly draw away to South Korea.

Grujic played the full 90 minutes in midfield, and was one of Mladen Krstajic’s standout performers.

Having return to Merseyside with a hamstring complaint, Sadio Mane missed Senegal’s final World Cup qualifier of the campaign, but Aliou Cisse’s side still won 2-1 without him.

Guinea were less fortunate without the suspended Naby Keita, however, losing 3-1 in their dead-rubber clash with DR Congo on Saturday.

And Georginio Wijnaldum was left out as the Netherlands produced a solid display to win 3-0 at Romania.

On the youth stage, Kamil Grabara made his debut for the Poland U21s, playing the full 90 minutes in a 3-1 Euro qualifier win at home to Denmark on Tuesday. Harry Wilson also featured in the Wales U21s’ 0-0 draw with Romania, and Corey Whelan played 90 minutes in the Republic of Ireland U21s’ 2-1 loss to Norway.

Finally, Curtis Jones captained the England U17s to a 2-1 friendly win over Russia on Saturday, with both he and Elijah Dixon-Bonner playing the full 90 minutes.

Dixon-Bonner and Luis Longstaff were both unused in Tuesday’s 2-1 win over Germany, however, and Jones, who had relinquished the armband despite starting, was withdrawn after just 23 minutes.

The 16-year-old suffered a nasty cut above his knee, but hopefully won’t miss much action, with the Liverpool U18s next up against Middlesbrough in the league on Saturday.