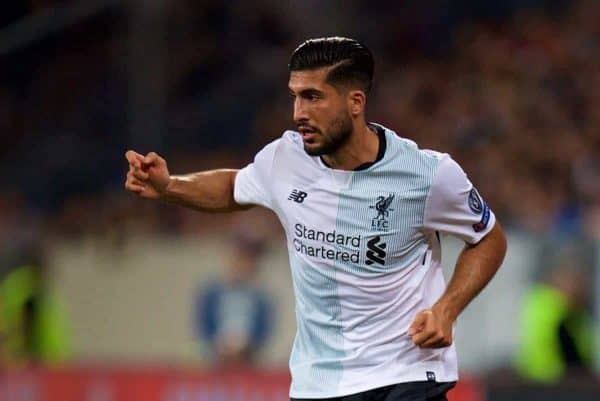 As we approach the January transfer window the rumour mill is cranking up again; here’s a full run-down of the latest links to and from Anfield.

Liverpool weren’t active in the winter market last season and there was a feeling for some that it had cost them a chance to finish in the top four.

That ultimately didn’t prove to be the case, but it was a close call toward the end of the campaign and some fans are calling for investment this time around.

But is it a comparable situation? Jurgen Klopp has been able to rotate far more this term and key players are fresher…as well as Liverpool actually having more players who could be considered key.

Still, the rumours are landing and aren’t likely to stop—particularly concerning one particular outgoing.

Emre Can is heading into the final six months of his contract and he’ll be able to discuss terms with new clubs from January.

The Reds would naturally prefer to keep hold of the German midfielder, but if he’s to leave on a free transfer, would it be more preferable to get money for him in January?

Juventus are the favourites to land him and chief executive Beppe Marotta hasn’t been shy about admitting their interest.

The Turin club remain in the hunt, but Marotta has conceded other clubs will want the Reds’ No. 23 as well.

“Emre Can is a name doing the rounds because his contract is running down,” he told MediaSet Premium (via Echo).

“I won’t deny he is a player we too have monitored and many important clubs will try to close a deal over the next few weeks.

“We are tracking the situation, nothing more.”

There’s still a chance Emre Can renews, but it’s looking less likely as time goes on…and less vital that the club bow to any demands with each impressive performance without him.

Daniel Sturridge continues to divide opinion among fans: should he play more, or be offloaded altogether?

The middle ground is the answer according to the Independent, who suggest the striker could be set for a loan move to another Premier League club.

Sturridge wants to go to the World Cup in 2018 with England, but he’s unlikely to do so taking it in turns with Dominic Solanke to come on for Roberto Firmino for the last 15 minutes of matches.

Incoming deals are possible too, according to the media.

The Irish Independent‘s Kevin Palmer says the Reds still want a centre-back, but there’s no chance they’ll fork out the £70 million needed to lure Southampton into a Virgil van Dijk sale.

As such, other targets are being considered.

Top prospect? Stefan de Vrij, out of contract in the summer at Lazio. But the Mirror report Inter Milan will bid £25 million for him to snare his signature sooner.

Lower down the transfer fee scale, Liverpool are linked with a move for 18-year-old Domingos Quina, currently at West Ham.

The Portuguese under-19 midfielder only signed for the Hammers from Chelsea in 2016 but are ready to take a quick profit on him, according to the Mail.

Kovacic is now back to full fitness after an injury lay-off and is a regular squad member for Zinedine Zidane’s side, though will find it difficult to nail down a regular spot in the starting 11.