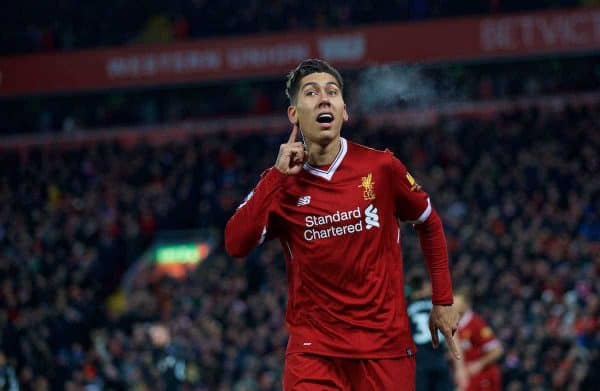 Firmino “the facilitator”, Coutinho “on a different level” – Media on Liverpool 5-0 Swansea City

The media have lauded Liverpool’s 5-0 win over Swansea City on Boxing Day, with certain individuals receiving huge praise after a fine display.

The Reds returned to winning ways after their 3-3 draw at Arsenal, thumping a relegation-bound Swans outfit at Anfield.

Roberto Firmino‘s double was added to by yet another Philippe Coutinho classic, as well as first Kop end goals for Trent Alexander-Arnold and Alex Oxlade-Chamberlain.

The victory puts Jurgen Klopp‘s side back into fourth place in the Premier League, with Leicester City the Reds’ next opponents on Saturday.

Reporters lauded the performance of individuals, on another goal-filled evening on Merseyside…

The Telegraph‘s Chris Bascombe heaped praise on the brilliant Firmino, as he took his goal tally to 16 this season:

“While Philippe Coutinho’s value swells in a season of personal excellence, Roberto Firmino may be the most underrated player beyond Merseyside. His application enables others to shine. He is the facilitator.

“Liverpool may eventually be forced to imagine a post-Coutinho era. If so, Firmino’s ability to get the most from those around him may make it more tolerable.”

David Maddock of the Mirror chose Coutinho as his Man of the Match, following another masterful showing from the Brazilian:

“Had the one true touch of class in the game that made all the difference.”

“It was a gamble to deny him his dream move last summer but it has paid off handsomely. It’s testament to his attitude and application that Klopp handed him the captain’s armband in the absence of both Jordan Henderson and James Milner.

“Having netted seven times in December alone, this is the most profitable month of Coutinho’s Reds career. His value just keeps on going up.”

The Independent‘s Simon Hughes also focussed on Liverpool’s most gifted footballer, as he continues to show a great attitude and outrageous technical quality:

“Under the lights at Anfield, Coutinho offered stellar quality, scoring the game’s opening goal early on before supplying a second for Roberto Firmino. Coutinho was on a different level. Barcelona are briefing they want to pay less but surely his value goes up after these type of performances. It was certainly another occasion that reminds he is ready to play for a team that wins trophies.”

Pearce touched upon a special moment for Alexander-Arnold, who saw another dream come true on Boxing Day:

“The outpouring of emotion that followed showed exactly what it meant to the lifelong Reds fan, who used to watch training through a hole in the wall at Melwood, as he slid on his knees in front of the Kop before being mobbed by his team-mates.

This is Anfield’s James Nalton compared the youngster’s goalscoring statistics with another Reds right-back, and it made for impressive reading:

“It was his first goal in the Premier League, but his third in total this season which is an excellent return for a right-back who doesn’t play in every game.

“To put this into perspective, he now has more goals for the club than Nathaniel Clyne, who was the club’s regular full-back for two full seasons.”

The win was another impressive one, but some were quick to point out how poor Swansea were, and how the hosts were not at their magnificent best…

“Scoring five unanswered goals should go down as a noteworthy feat but the fact of the matter was that Liverpool did not need to be anywhere near their scintillating best to eviscerate spineless opponents who are plunging towards the Championship.”

Andy Hunter of the Guardian was impressed by Liverpool’s display, but felt a poor Swans outfit helped matters:

“Liverpool were irrepressible in the second half with Philippe Coutinho orchestrating a rout, Roberto Firmino scoring twice and Mohamed Salah cutting at Swansea’s fragile confidence as Jürgen Klopp’s team made it 12 goals in three league games.

“The extent of the visitors’ collapse was embarrassing, however. Huw Jenkins, the Swansea chairman, slumped lower and lower in his padded seat in the Anfield directors’ box as the goals rained down and the importance of appointing a miracle-worker to succeed Paul Clement became increasingly apparent.”

Bascombe described the frustrating unpredictability of this Reds team to perfection:

“This Liverpool side are infuriatingly good. They do not walk the line between genius and madness—they pirouettes down it. They are joyful to watch when gliding through defences, but there is always the feeling they can lose balance at any moment—too often making their supporters watch through clasped hands.”

A few were looking ahead to the upcoming meetings with Leicester and Burnley, as the relentless festive period continues…

“Firmino and Salah were withdrawn after the pair had just combined to put the side 4-0 up.

“The two will be considered, along with Coutinho, as the most potent attacking weapons in the team, and it was good to give them a break ahead of a busy second half of the season.

“Klopp’s men now go into Saturday’s game against Leicester full of confidence, and hopefully full of energy, as they look to creep further into the top four.”

The Anfield Wrap’s Neil Atkinson urged the Merseysiders not to let up, with two matches in 48 hours about to take place:

“Well in, Liverpool. See you Saturday. See you Monday. It doesn’t let up. Let’s get in position. Let’s be ready for some key goals. Let’s be adorable. Let’s be adoring.”