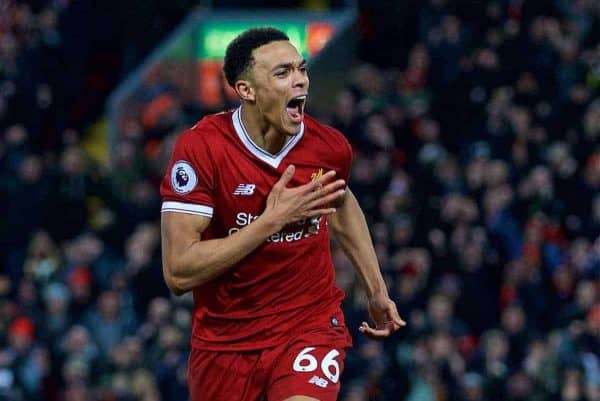 Liverpool continued their busy festive schedule with an impressive 5-0 victory over relegation strugglers Swansea at Anfield on Boxing Day.

Liverpool were without skipper Jordan Henderson but Georginio Wijnaldum, Alex Oxlade-Chamberlain, Trent Alexander-Arnold and Joel Matip were all handed starts as Jurgen Klopp made four changes to the side.

Simon Mignolet, after his highly criticised performance against Arsenal just four days previous, kept his place in goal, though Sadio Mane was left out.

Philippe Coutinho, wearing the armband in Henderson’s absence, scored an absolute screamer within five minutes but the first half then began to fizzle out.

Roberto Firmino got his first goal of the game early in the second-half, before he netted a second just one minute after Trent Alexander-Arnold smashed in an unstoppable strike in front of the Kop.

Oxlade-Chamberlain wrapped it up with a late fifth goal for the Reds.

Fans couldn’t believe how good Coutinho’s goal was in the first-half and there was praise for Ragnar Klavan, who produced a solid performance at centre-back…

Coutinho's finish there every bit as emphatic as my Monopoly win last night.

“Will miss those world-class strikes of Couts next season…” – Jim Bond on Facebook.

My word, what a goal!

Klavan quick on interceptions and stepping across today. Nice and easy for the CBs with no runners from deep so far. Keep that up, Swansea.

In the second half, fans were delighted to see the team pick up intensity and there were celebrations for Alexander-Arnold’s first goal in the Premier League.

Made up for Trent. Great little player. Bags of potential ????

Nice to see us step up second half, I'd love to see Sadio come on and score here

“Much improved game management by Klopp. Happy to see the manager less rigid.” – Rocky on the forums.

YES TRENT!!! Couldn't be happier for him!

At full-time, Kopites were full of admiration for another clinical performance and Alexander-Arnold, Coutinho and Firmino were the players who caught the eye most…

Appears to be top trumps in finishing tonight, Ox may have just nicked it!

“Good response from the boys after a frustrating first half performance…” – Bonkhe Brian Vilakati on Facebook.

I've run out of words for Coutinho. He's playing against pro footballers and making them look like the fat blokes in my 7-a-side league. Different levels.

“Captain Coutinho. Take a bow mate.” – Toni on the forums.

Vintage Boxing Day performance by the Redmen. Makes my reading of Klopp Bring The Noise all the more sweet tomorrow. Up the Reds.

“Our brazilian duo with an absolute masterclass.” – Dennis El Rich on Facebook.

“Coutinho, Firmino, Trent and Klavan all great today.” – Awny on the forums.

Anything Spurs can do, we can do better! Anfield buzzing, amazing 2nd half performance, Can & Gini decided to run forward, great goals all round especially chuffed for Trent and Ox. Thought Klavan was superb & Coutinho sublime, unplayable #LFC