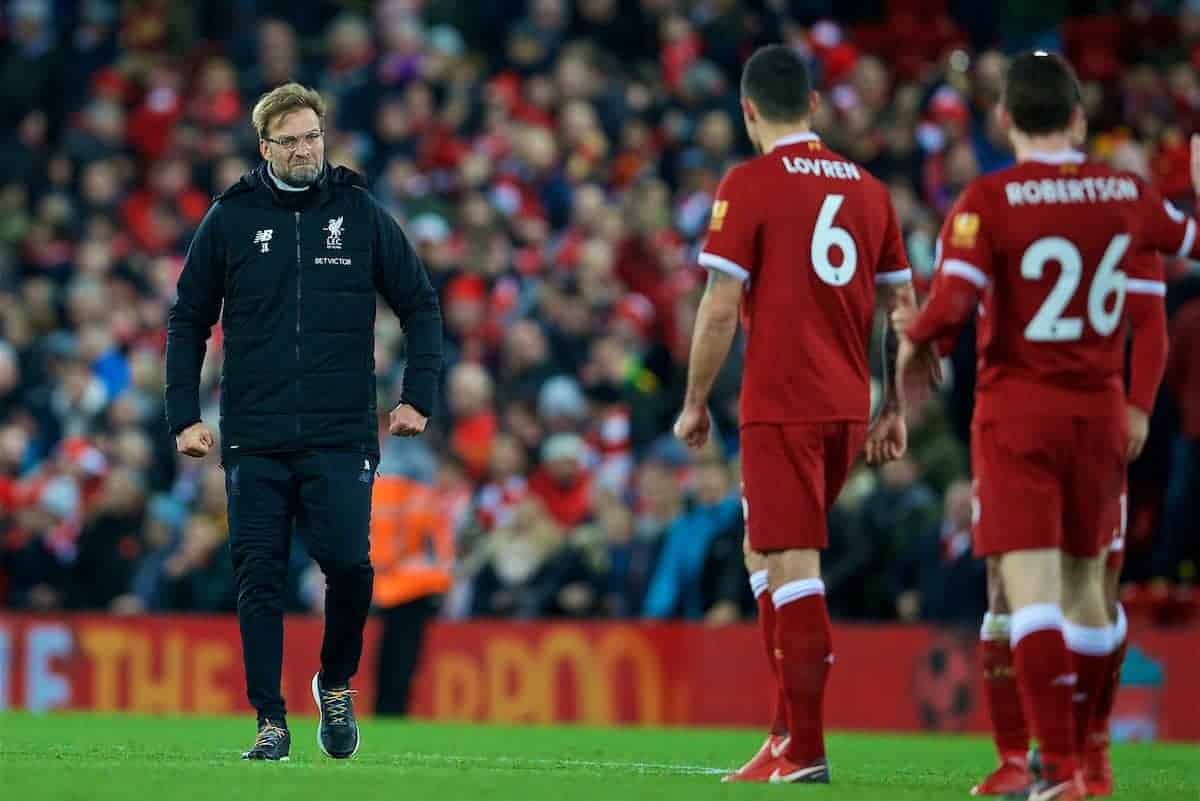 Jurgen Klopp is anxiously awaiting a fitness report on leading scorer Mohamed Salah as he prepares for Liverpool’s second match in 48 hours.

The Egypt international took his tally to 23 in just 29 appearances since signing from Roma in the summer but limped off after scoring both goals in Saturday’s 2-1 win at home to Leicester.

Salah has played 1,596 minutes of Premier League football this season—averaging a goal every 94 minutes—with only five other attackers having been on the field for longer.

His absence would be a blow ahead of the trip to Burnley but Klopp knows the 25-year-old will need a break at some point after equalling Roger Hunt’s 1961/62 club record of 23 goals before the turn of the year.

“I don’t know in this moment exactly [what it is] but he was limping. That’s never a good sign, to be honest,” said the Reds boss.

“We have to see what his problem was. We will see what he can do for the next game.

“For me it is the most strange situation. It is the third time this year [playing twice in three days] and people think ‘wow, how will you do that?’.

“The good news is Burnley had to play Saturday as well. I don’t think they got the point [in the goalless draw against Huddersfield] without running so they have the same thing to do and that is then fair play.

“It is not the best thing to do but it is absolutely OK and we will be ready because we have to be ready.”

The win over Leicester saw Liverpool equal their longest unbeaten run under Klopp, when the 15-match streak from August to December 2016 saw them head into the new year in second place in the Premier League, six points behind then leaders Chelsea.

Fast-forward 12 months and they are fourth, four points behind Antonio Conte’s side with Manchester City a distant 17 points ahead.

January was when their collapse started, winning just one FA Cup tie in the month, so Turf Moor—where Burnley have conceded just six goals—is not a trip to be taken lightly as Klopp has great admiration for the achievements of Clarets manager Sean Dyche.

“I think my friend Dave [Wagner, Huddersfield manager] said to compare what Pep [Guardiola] is doing at City—an outstanding season—with Burnley who are doing exactly the same under completely different circumstances,” he said.

“Fantastic, outstanding. I know how difficult it is to swim with the big fishes in the league and obviously they swim quite well.

“I really respect them and appreciate them. They are really organised and it is quite difficult.”