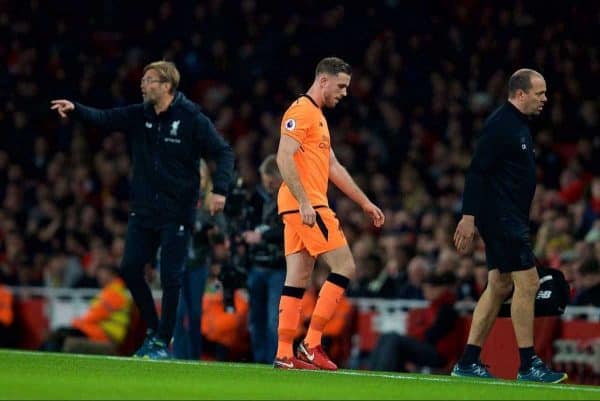 Jurgen Klopp has ruled Liverpool captain Jordan Henderson out of their Boxing Day clash with Swansea City, due to a hamstring injury.

Henderson limped off the field after just 10 minutes in Friday night’s 3-3 draw away to Arsenal, struggling to run off a strain.

Taking his place, James Milner operated alongside Emre Can and Philippe Coutinho in Klopp’s midfield, as a dramatic back-and-forth between top-four rivals played out.

With the Reds provided little time to come up for air during their intense festive schedule, Klopp previewed the upcoming meeting with Swansea while at the Emirates.

And the 50-year-old seemed confident Henderson would miss out, despite no scans being undertaken on his hamstring immediately after the game.

“The problem is that Hendo will not feature for sure,” he explained.

“He’s out. That makes it even worse, the feeling of tonight, because we were really OK with injuries.

“And now it happened at the beginning of this period, or the middle of the period, whatever.

“It’s not too cool, but as I heard nobody else [is definitely out]. [There are] a few knocks, as it always is, but they should be OK again and that’s the situation.”

Given the lack of rest between Friday’s game and the Reds’ return to Anfield on Tuesday, Klopp is likely to heavily rotate for the visit of Swansea.

Georginio Wijnaldum was brought on in the closing stages in north London, but can now be expected to come back into the starting lineup to replace Henderson.

That Klopp was required to introduce Milner so early in the game limits his rested options further, but it could be that Adam Lallana comes into consideration for a start.

Elsewhere, the likes of Trent Alexander-Arnold, Joel Matip, Alex Oxlade-Chamberlain and Dominic Solanke will be hoping to come back into the side.

Currently under care of interim player-manager Leon Britton, Swansea are a considerably lesser challenge than Arsenal on paper, with Klopp fielding all of his ‘Fab Four’ on Friday.

A particularly off-colour Sadio Mane could be one of those to drop out against the relegation candidates, while Loris Karius could replace Simon Mignolet between the sticks.