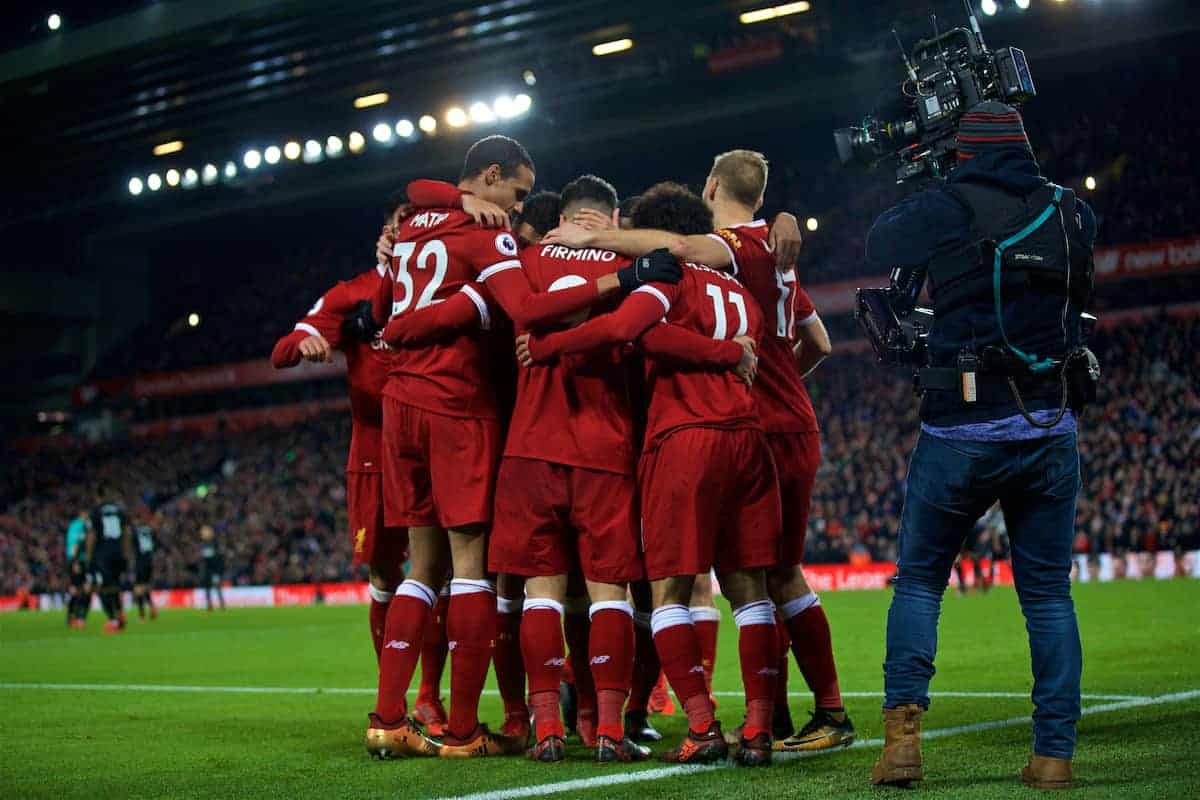 Liverpool blew Swansea away to climb back to fourth in the Premier League. Roberto Firmino grabbed two and Trent Alexander-Arnold fired in his first goal in front of the Spion Kop as the Reds ran riot on Boxing Day.

Had nothing to do bar two routine stops for 90 minutes then tipped the ball over well in stoppage time.

Probably the easiest and coldest fixture for the Belgian this year. No mistakes so everyone is happy…

Swansea did little in first half to give Trent any worries. Attacking-wise he looked to break forward and support Alex Oxlade-Chamberlain and Mohamed Salah on every occasion.

Pumped a few crosses in that were a little deep. Fought his way to what looked a lost cause and blasted in his first league goal in front of the Kop.

Very quiet opening half for the whole of the defence, just the one opportunity testing the centre-back pairing.

A comfortable return to the starting line-up. As the second half got underway the goals began to rain and Swansea gave up. Made a great block (with his rear) on 36 minutes; it was the only threatening Swansea play and Ragnar shut it down.

Needs to knock the ‘circles of possession’ on the head; a top-quality striker will pinch the ball when he takes the long way around at some point.

Worked well in conjunction with both Coutinho and Firmino when the Brazilians came over to the left side.

Little to evaluate defensively due to Swansea’s lack of first-half ambition.

The Scotsman does like to drill the ball in and, on the whole, his crosses were OK. Involved in the build up for Liverpool’s third goal, pressed well and disrupted the Swan’s right side.

Sat very deep in the first half. Picked up a knock to the ankle on 40 minutes which looked to be giving him considerable pain as the first half drew to a close.

Decent sight of goal but the German tickled the ball towards goal, easy for Lukasz Fabianski.

Was strangely given time and space in the second half and that helped Swansea seal their own fate.

Very quiet for the first period, one good bursting run forward and helped out defensively throughout.

Second half, more of the same. Protects the back four well, goes unnoticed at times but if he didn’t do it, you’d soon notice the lack of work.

Had his name sung a multitude of times by the Kop, and deservedly so.

Positive going forward, looked lethargic at times however during the first half—who didn’t though?

Fired a shot high over the bar but remained positionally disciplined. Battled well for the entire second half.

Capped a fine display with a well-taken goal, outside of the boot and made it 5-0.

Philippe Coutinho – 9 Man of the Match Busy busy busy…Scored a wonderful goal on five minutes and looked threatening whenever he went forward.

Did fall asleep on the edge of the box allowing Swansea to get in behind, luckily bailed out by Robertson.

Floated a beautiful ball into Salah in the first half then replicated this feat in the 51st minute, Firmino this time volleyed the ball home. Goal and assist—a good day’s work.

A quiet fist half for the Egyptian but was of course in the thick of the action for Coutinho’s opener.

Twisted and turned early in the second half and was denied by a good save by Fabianski.

Went very close on 56 minutes after a training ground set-piece link-up with Coutinho.

Had the composure to slide the ball to an unmarked Firmino to make it 4-0—the sign of a great attacker.

High energy from start to finish; take out the assist and his well taken goals, and you are left with a Brazilian who works his socks off.

Lost the ball, sloppily, in the first half and gave away a throw-in from a loose touch. Immediately won the ball back and drove forward—typifies his attitude.

Right place at the right time, time and time again. Unlucky not to be left on and grab his first Liverpool hat-trick. Smart interchange of passes with Coutinho soon after coming on.

Dropped his shoulder on the edge of the area and tried to carve out his own chance at goal, unlucky. Looked to add a sixth with four minutes left, looks very dangerous in and around the 18-yard box.

Nice return for the midfielder, came on at 4-0. First chance he got he bombed on into the box, pulled a Cruyff turn and fired just over. Looked fresh.

Dependable as ever from the bench and never under any threat from a disappointing Swansea. Liverpool looked a little boring in the first half, I’d like to think this was game management after the Arsenal collapse and in accordance with Klopp’s wishes to manage situations better.

Fired the side up during the break and they came out all guns blazing.

Used the opportunity to rotate once the score was safe. A fantastic response to the “leaking of The Emirates.”