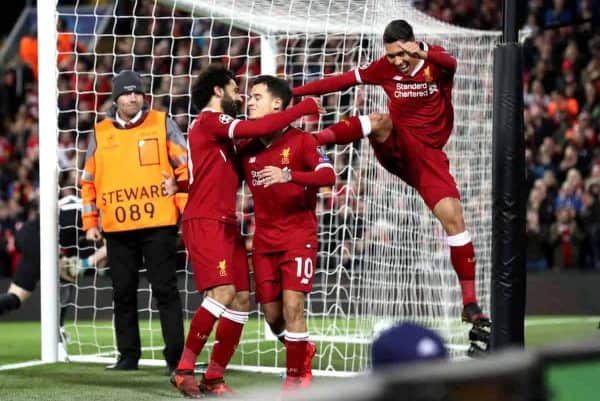 Philippe Coutinho scored a hat-trick as Liverpool produced a stunning display to reach the last 16 of the Champions League, Spartak Moscow 7-0.

The Reds arrived for a make-or-break night in fine form following back-to-back away wins to make it just one loss in 13 games.

After Steven Gerrard’s U19s reached the last 16 of the UEFA Youth League as group winners with victory over their Russian counterparts earlier in the day, Jurgen Klopp’s side looked to follow suit even though a draw would have been enough to progress.

Klopp sprung a tactical surprise at Brighton deploying a three-man defence, but restored his side to a more traditional look at Anfield, with the Reds back in the 4-2-2-2 formation.

No risks were taken as Klopp selected arguably his strongest possible team, with five changes made which included Jordan Henderson dropping to the bench.

Joe Gomez, Ragnar Klavan and Alberto Moreno returned to defence, along with Loris Karius, while the ‘Fab Four’ all started—with Coutinho appointed captain for the night.

A fast start was wanted and the Reds got exactly that as Coutinho converted a penalty just inside four minutes for Liverpool’s fastest-ever Champions League goal at Anfield after Mohamed Salah was fouled.

Spartak responded well without posing much of a threat, but the same couldn’t be said of Klopp’s side who looked like they could score every time they attacked.

And just 11 minutes later Coutinho netted his 50th Liverpool goal to double the lead and put the Reds in complete control.

It was a stunning goal made and finished by the ‘Fab Four’ as the skipper slotted home after a slick move involving Salah, Sadio Mane and Roberto Firmino.

The Reds’ attacking play was sensational, and it was 3-0 and game over all inside 20 minutes, as Firmino finished superbly with the outside of his boot after Mane’s cross fell kindly into his path.

Chances continued to present, and Mane should have added a fourth but fired over on the counter-attack moments after Luiz Adriano saw a rare effort for the visitors easily saved by Karius.

The only dampener of a sublime first half came in Alberto Moreno being forced off on the stroke of half-time with an ankle injury, which saw James Milner replace the Spaniard.

The second period was all about seeing out a three-goal lead with the professionalism missing in Sevilla three weeks ago.

But the Reds eradicated any fears of hanging on to a three-goal lead by scoring a sensational fourth instantly after the restart, with Mane slamming home a stunning volley from Milner’s pin-point cross.

Klopp took advantage of the chance to give Dejan Lovren a breather ahead of the Merseyside derby by introducing Trent Alexander-Arnold, which gave Joe Gomez a run-out at centre-back.

Salah, desperate to join his play-mates on the score-sheet, almost made it six on the hour-mark but his low curler was tipped around the post as Liverpool hunted for more goals.

The excellent Firmino was also awarded an early night, with Daniel Sturridge replacing the Brazilian for the final 20 minutes.

And within five minutes of coming on Sturridge made his mark on proceedings by selflessly teeing up Mane to net his second of the night and make it 6-0 with a close-range finish.

With the Champions League record 8-0 win over Besiktas now in sight the Reds pressed for more goals, and Sturridge went close only to somehow divert over the bar from close range.

Five minutes from time a magnificent seventh arrived as Salah finally got on the score-sheet, picking out the top corner from inside the box to complete the scoring.

It was the icing on the cake of a simply sensational performance from Liverpool, who reached the last 16 of the Champions League for the first time since 2009.