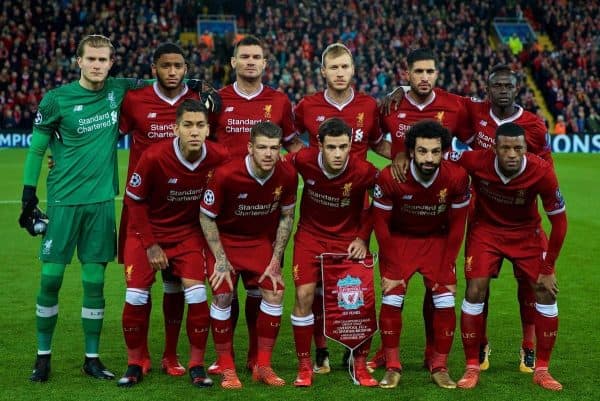 Liverpool produced a stunning attacking performance to dispatch of Spartak Moscow 7-0 at Anfield on Wednesday, with the Reds’ ‘Fab Four’ a joy to watch yet again.

Karius came in for Simon Mignolet, as is always the case in Europe, and it was a very easy night for him.

The German got down well to make a solid early save, but did misjudge one sprint out of his goal and clattered into Gomez, fortunately not to his side’s detriment.

Otherwise, he was as much a spectator as those watching on from all four sides of Anfield.

Gomez is the more solid right-back option than Trent Alexander-Arnold, and it was another faultless defensive performance by the youngster.

He didn’t make too many attacking forays – he didn’t have to, such was Liverpool’s dominance – and generally cruised through proceedings.

The Croatian’s form has been improved of late, and he will have been happy to come through another game unscathed.

Whenever he was called into action he did his job, especially when it came to aerial battles, and he will see this as another positive step in the right direction.

Received a warm applause when replaced by Alexander-Arnold on the hour mark.

Klavan returned to the team after missing Saturday’s 5-1 win over Brighton & Hove Albion, and it was an extremely straightforward night at the office.

The 32-year-old made one superb block shortly before half-time, and another good one in the second-half, and cut an authoritative figure throughout the evening.

Apart from 16 disastrous minutes against Sevilla in Liverpool’s last Champions League outing, this has been a strong season from Moreno.

He was again impressive against a hapless Spartak Moscow outfit, until injury cruelly ended his night late in the first-half.

Hopefully, a long spell on the sidelines isn’t imminent.

Can was preferred to captain Jordan Henderson in the deep-lying midfield role, and he was a dominant figure on a great night at Anfield.

One stupid early tackle earned him a yellow card, which rules him out of the first-leg of Liverpool’s next Champions League game, but he was otherwise imposing in all facets of his game.

This was a typical Wijnaldum performance – under-the-radar, sensible but ultimately effective.

While more illustrious names were strutting their stuff in the final third, the 27-year-old was an industrious presence who snapped into tackles, used the ball well and worked his socks off.

Playing much better of late.

It was a proud and memorable evening for the Brazilian, who skippered the Reds in Henderson’s absence and took home the match ball.

His night leading the team got off to the perfect start, as he stroked home an early penalty to ease any nerves inside Anfield. It was Liverpool’s fastest ever home Champions League goal.

Coutinho then finished coolly to get his second of the night soon after, and completed his hat-trick with a deflected effort. He is a player right at the top of his game.

Yet again, Salah terrified the life out of the opposition, and he played an integral role in Liverpool cruising to such an overwhelming victory.

The 25-year-old won the penalty that Coutinho converted, played a key part in the captain’s second and got his 18th goal of the season late in the day.

His speed and movement was unstoppable all night.

Out of Liverpool’s much-lauded ‘Fab Four’, Mane was probably the least effective on the night, yet he was still very impressive.

Some rusty finishing and end product let him down on occasions, but straight after half-time, he rifled a stunning volley into the Kop net.

The Senegalese should only get better after an injury and suspension-blighted campaign – that should be worrying for Everton ahead of Sunday’s Merseyside derby.

What a fantastic footballer.

This was another superb showing from Firmino, who showcased his brilliance at leading the line in his own subtly magnificent way.

He laid-on a beautiful, unselfish assist for Coutinho, got his 13th goal of the campaign with a nice finish and generally made Liverpool tick from the front.

Got a richly-deserved standing ovation when he was substituted.

Sent in a great cross just two minutes after the interval, which Mane fired home superbly – and added another two assists before full time! A reliable all-round display, in standard Milner fashion.

The teenager was a lively presence, bringing more attacking quality from right-back than Gomez.

Looked a little rusty, but didn’t have a huge amount of time to make an impact.

The manager made five changes from the weekend win against Brighton and his rotation again paid off handsomely.

Klopp has Liverpool playing some of their best football in years and he deserves so much praise for masterminding such a fearless style of play.

Having been doubted by some after the Tottenham defeat, the boss had responded wonderfully, with just one defeat in 15 matches.