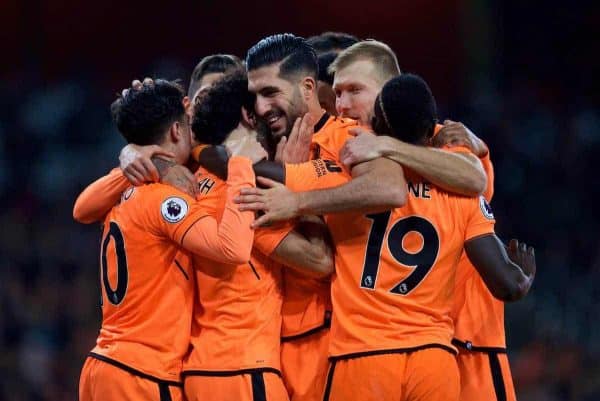 As Liverpool’s matches come thick and fast during the festive period, will we see Jurgen Klopp ring the changes for the Boxing Day visit of Swansea City?

The Reds drew 3-3 at Arsenal in Friday night but the Boxing Day clash should hopefully be a more straightforward outing for Jurgen Klopp‘s men, as bottom-place Swansea head to Anfield.

It would be a surprise if Klopp didn’t make a number of alterations to his starting lineup, with Leicester (Saturday) and Burnley (New Year’s Day) to follow, but who exactly could take to the field?

With the Arsenal game coming less than three days before the Boxing Day meeting gets underway, it is understandable why changes in personnel are required.

The visit of Leicester City on December 30 and trip to Burnley on New Year’s Day are also around the corner, so there is very little rest time for the Reds over Christmas and New Year.

Because of this, we should see a very different team to the one that strolled out onto the Emirates turf, with changes in midfield and attack most likely.

Guessing Klopp’s lineup these days is extremely tough, with 71 changes in total made this season – more than any other manager – but we could see a 4-4-2 system deployed, with Mohamed Salah used in tandem with Dominic Solanke.

Simon Mignolet will likely keep his place in goal, despite a woeful showing at Arsenal, and Joel Matip could partner Dejan Lovren at the back, after recovering from injury.

Bringing in the fresher midfield legs of James Milner, Gini Wijnaldum and Alex Oxlade-Chamberlain would also be an understandable decision.

There is also the option of going with a 4-3-3 formation, with Loris Karius coming in for Mignolet, and Matip staying on the substitutes’ bench for the time being.

Oxlade-Chamberlain’s versatility can see him shine in a midfield-three, occupying a more offensive role ahead of Milner and Wijnaldum.

A stronger-looking attack than the first lineup could see Salah as the only member of the ‘Fab Four’ rested, with Sadio Mane on the right, Philippe Coutinho on the left and Firmino leading the line.