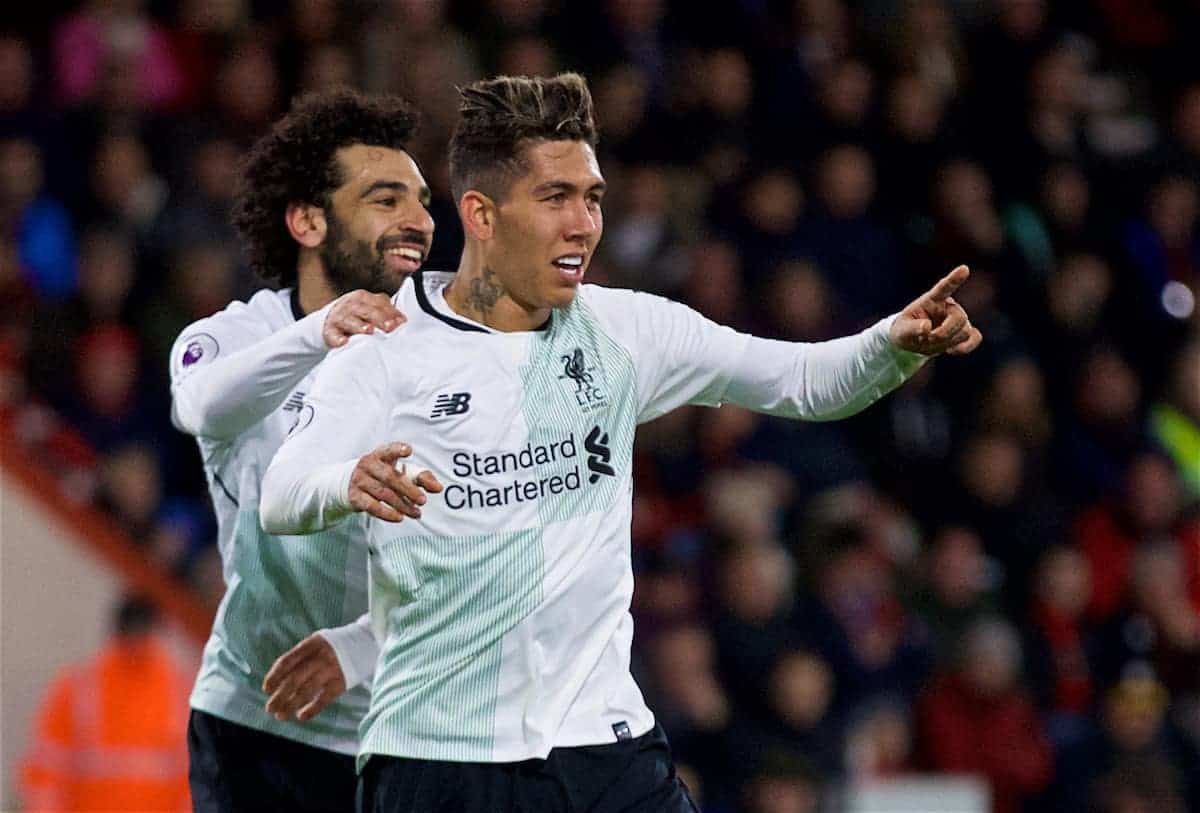 Liverpool produced a superb display to thrash Bournemouth 4-0 at Dean Court on Sunday, and supporters were left unsurprisingly delighted.

The Reds always had too much attacking brilliance for their powerless opponents, as they got back to winning ways in style on the south coast.

Philippe Coutinho opened the scoring with a lovely individual effort, before Dejan Lovren‘s diving header made it 2-0.

Mohamed Salah scored his 20th goal of the season to put Liverpool in dreamland before half-time, and Roberto Firmino completed the rout.

With Sadio Mane the only member of the ‘Fab Four’ not starting, it was left to Coutinho, Salah and Firmino to run the show. They duly obliged…

Salah has scored more goals in half a season than Hazard in a full season for Chelsea.

Bob is bae. That is all.

Firmino Deserves that. So important to the team going forward

I don’t see anyone missing Mane now and when team news came out 95% fans moaning about why Mane is on the bench.

Coutinho and Salah, as Robert Palmer would say… pic.twitter.com/zRW6sAlkzG

Salah is turning into Arjen Robben. Everyone knows what's coming but they can't do anything about it.

Mo Salah. Signing of the season by a country mile.

That's absolutely stunning from Coutinho. Such a composed finish after a mazy run. Great run from Robertson on the outside helped him out too. #LFC

Alex Oxlade-Chamberlain was excellent all afternoon in his preferred midfield role, and it was nice to see fans appreciating his influence…

Looking more and more the part every week, Oxlade-Chamberlain coming into his own now. Benefited from Lallana being out, no doubt. #LFC

Oxlade-Chamberlain trying hard to prove my “supremely average” tag wrong. Hope he does!

Alex Oxlade-Chamberlain has created the most chances (4) on the pitch in the first half.

Chamberlain has been brilliant, again.

Watch that 45 minutes and you see exactly why we signed Oxlade-Chamberlain, he’s a perfect fit. Class act.

Sensational from Chamberlain there ………

– Fester on the forums.

Oxlade-Chamberlain is quietly but impressively growing into an LFC player and he's nowhere near peaked yet. Could be a top quality CM for years to come.

I was wrong about Alex Oxlade-Chamberlain. He’s good. pic.twitter.com/tGrvI0LwZY

The team performance as a whole received rave reviews, as Liverpool picked up a much-needed three points…

Great performance today. Thanks for the support…and the carol singing! Long journey home. Be safe. #YNWA

Full-time, #LFC win 4-0 and probably even more comfortably than that scoreline suggests.

Really good performance all round that.

Decent team dispatched easily with blink and you miss it football,just mouthwatering at times today and we’re unbeaten for a while now.

FT 0-4. Professional performance in that second half. Back on track and now onto Arsenal on Friday.

4 – @LFC are the first team in top-flight history to have won four consecutive away games by a margin of at least three goals. Record. pic.twitter.com/Kjowqc6676

Brilliant attacking display yet again. Mo, Ox, Bobby and Phil were amazing. Clean sheet a bonus and nice to see some players giving away shirts to the traveling fans. Bring on Arsenal!