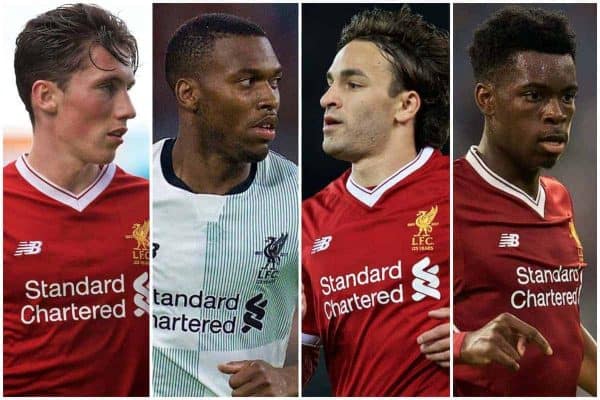 We round up the latest Liverpool transfer news and rumours as the January window heads into its final week and more possible deals emerge.

The Reds suffered their first defeat in 19 games on Monday night, losing 1-0 away to a stubborn Swansea City side enjoying a resurgence under Carlos Carvalhal.

For supporters travelling back from the Liberty Stadium this served as a jolt, with many calling for a renewed effort in the winter transfer market to bolster Jurgen Klopp‘s squad.

Meanwhile, a host of other deals continue to bubble away in the background as the German prepares to allow some of his fringe figures a mid-season exit.

Here’s the latest from the rumour mill, including both incomings and outgoings.

BBC Sport revealed that Liverpool were considering the offer, with the terms undisclosed but including Sturridge’s full wages and a potential obligation to buy next summer.

Now, the Mail claim that Inter’s approach includes a £2 million loan fee, along with a £25 million deal lined up in six months’ time.

This comes with both Eder and Gabigol set to leave the San Siro, allowing the Italian side to “commit to a move for Sturridge.”

Another player who is destined for the Anfield exit is Lazar Markovic.

The Serbian is yet to feature for Liverpool this season, and despite regularly training under Klopp at Melwood has only once been included in his matchday squad.

This came as an unused substitute in the 2-0 loss away to Leicester City in the League Cup in September, and this peripheral role highlights the need to move on.

And after three-and-a-half years with the club, Markovic could leave the Reds for Spartak Moscow this month, according to the Liverpool Echo.

They also claim that West Brom are “considering an approach” for the winger, who has played 34 times for Liverpool since joining from Benfica in 2014.

Rounding off the potential departures list, youth trio Lloyd Jones, Ovie Ejaria and Harry Wilson could all leave on loan this month.

That is according to Liverpool U23s coach Neil Critchley, who spoke to the Liverpool Echo on securing first-team experience for some of his most promising players.

“You look at Harry, Ovie and we still have Lloyd with us at the moment. They would be the three who would come under the radar of other clubs,” he said.

“There are lots of variables. What happens at first-team level will have an impact on who stays and who goes.

“If they go on loan brilliant, if they don’t and they keep playing well here they will be knocking on the door…We’ll see what happens over the next week.”

“[Luan] has captured the attention of several Premier League clubs, and is understood to have a release clause of €18 million in his contract,” Castles wrote.

Luan has previously been touted with a move to Merseyside, but with Castles a hugely questionable source this seemed dubious.

And sure enough, the Press Association’s Carl Markham moved swiftly to deny these claims.

“Liverpool categorically are NOT in talks for Gremio forward Luan. No truth whatsoever in claims suggesting otherwise,” Markham wrote on Twitter.

Liverpool in Agreement With Lemar?

Elsewhere in Castles’ report, he claims Liverpool “have an agreement in place” with France midfielder Thomas Lemar.

But he added that they “have refused to meet AS Monaco’s asking price of at least €100 million.”

Given his suggestion of interest in Luan was “categorically” ruled out, it is probable that Castles is also spinning a yarn when it comes to Lemar.

Either way, an agreement with the 22-year-old without any deal with Monaco is useless…

Finally, three former Liverpool players have made significant moves over the past two days.

Albert Riera took to Twitter on Tuesday evening to announce his retirement after a 17-year senior career that included two seasons at Anfield.

“Thanks to the clubs and supporters that have been along this way with me from 2001 till today. Proud and thankful for the way we have been together during 17 years,” he wrote.

Earlier on Tuesday, Scottish Premiership side Ross County revealed a deal to sign David N’Gog on a deal until the end of the season.