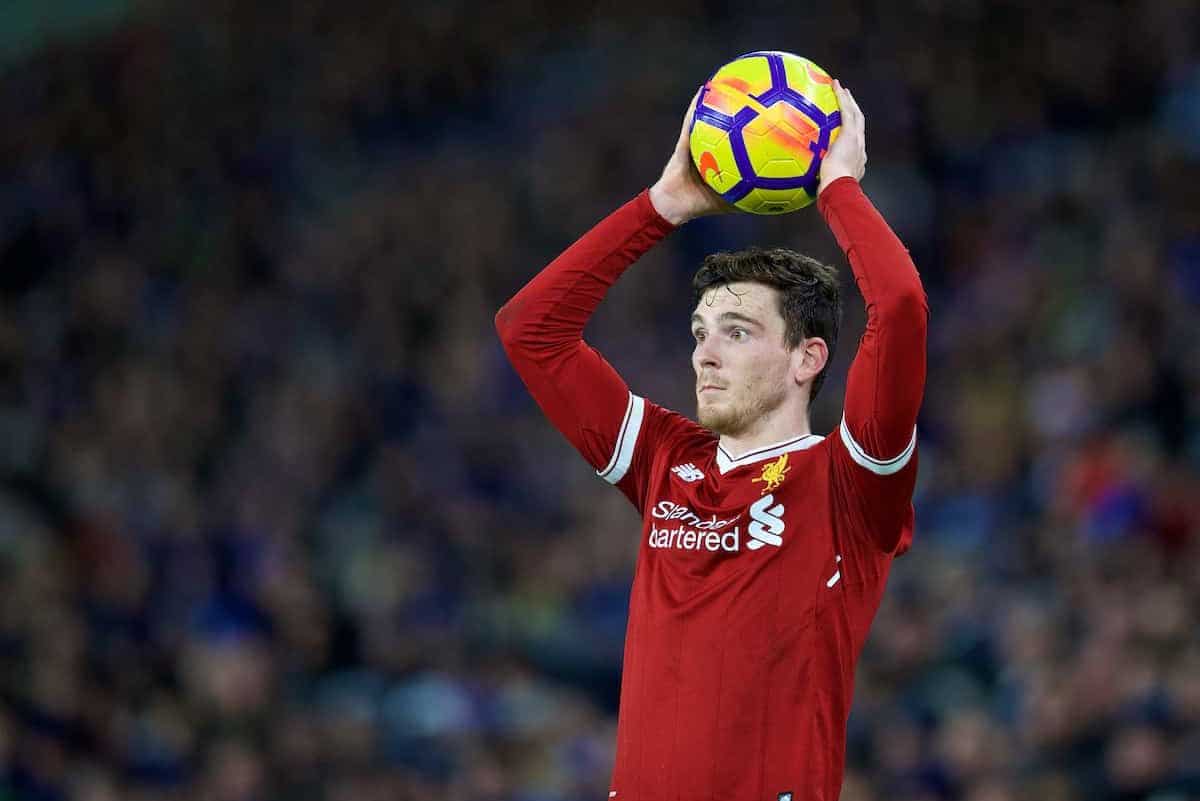 After a slow start, Andrew Robertson is settling into a prominent role in Liverpool’s starting lineup, with Jurgen Klopp‘s patience paying off.

Having joined from Hull City in an £8 million deal in July, Robertson arrived on Merseyside to little fanfare; the summer’s marquee signing, Mohamed Salah, had already scored his first goal of pre-season.

Previously spending spells with Scottish sides Queen’s Park and Dundee United before his three-year stint with the Tigers, this was to be expected.

Robertson was a low-key signing who Liverpool had seemingly overlooked just 12 months previously, when he was considered a possible alternative to Leicester City‘s Ben Chilwell.

But the 23-year-old is now finding his feet, and after producing his best performance yet in Sunday’s 4-3 victory at home to Man City, Robertson is proving the virtue of Klopp’s approach. Liverpool’s victory over City was a real statement; the previously unbeaten champions-elect fell at the hands of Klopp’s blistering attacking charge, as the Reds close to the gap in the top four.

Alex Oxlade-Chamberlain‘s opener set the tone, a swift burst through the midfield and a low, powerful drive beyond the helpless Ederson, whose evening was poised to go further downhill.

Though Leroy Sane equalised with an excellent effort before the break, taking advantage of Loris Karius‘ shortcomings at his near post, the Reds remained on top.

An eight-minute flurry of goals from Salah, Sadio Mane and Roberto Firmino stunned City, whose swagger faded, five days after a difficult night away to Bristol City in the League Cup semi-finals.

The Reds had taken control, with their front-footed approach encapsulated in a period of sheer dominance both on and off the ball after the break, that trio of goals the fruits of their labour.

Key to this was the industry of Robertson who, with his side already 4-1 up, produced a motion perfectly fitting Klopp’s blueprint.

With Bernardo Silva receiving the ball on the right flank towards the halfway line, Robertson put the Portuguese midfielder under immediate pressure, forcing him to turn back.

The ball went from Silva to Kyle Walker, to John Stones, to Ederson and finally to Nicolas Otamendi, all the while followed by a relentless Robertson.

Though it eventually resulted in a foul on Otamendi and a free-kick to the visitors, Robertson’s pursuit spread panic throughout the City ranks and forced the ball back 50 yards.

City were on the ropes, and though they came close to claiming a draw through late goals from Silva and Ilkay Gundogan, Liverpool ultimately held on for a priceless victory.

Three points saw the Reds move ahead of Chelsea into third and, ahead of their clash with Stoke City on Monday night, level with Jose Mourinho’s second-placed Man United.

Oxlade-Chamberlain, Salah, Mane and Firmino drew most of the plaudits after the game for their goals, but just as integral was the impetus of Robertson, who made more tackles (seven) than any other player.

And that an £8 million former Hull left-back was able to keep the likes of Silva and a beleaguered Raheem Sterling quiet at Anfield is a testament to his adjustment under Klopp.

Between joining in July and his appearance in the 5-1 victory over Brighton & Hove Albion at the beginning of December, Robertson played just 270 minutes of competitive football for Liverpool.

He had been on the substitutes’ bench a mere five times, and only made two outings in the Premier League; his other coming in the 2-0 defeat to Leicester City in the League Cup.

Robertson played more for Scotland than he did Liverpool between July and December, with five consecutive starts for Gordon Strachan’s side, scoring a stunning strike against Lithuania in September.

His absence from the matchday squad on a regular basis led to concerns Robertson was signed without Klopp’s blessing, but speaking in October he argued it was simply due to left-back being a “specialist position.”

There was also the matter of adjusting to the demands of Klopp’s system, as the manager explained in November, saying “it’s all about improvement and then to be ready for the moment you are used.”

The early signs were promising, with Robertson having shone on his debut against Crystal Palace in August, creating more chances (three) than any other player. But given his chance with previous first choice Alberto Moreno sidelined with an ankle injury in December, Robertson has stepped up dramatically.

Liverpool played eight times in December, with the No. 26 starting in seven of those and largely providing a stable presence at left-back.

His overlapping runs on the left flank gave the Reds a welcome outlet in the absence of Moreno, and though it was largely due to the individual quality of Philippe Coutinho, he laid on an assist in the 4-0 win over Bournemouth.

But most impressive throughout Robertson’s recent run has been his improvement off the ball, with his defensive work an indictment of Klopp’s commitment to a patient approach.

Those seven successful tackles at Anfield on Sunday evening showed Robertson in tune with the demand for intensity in Liverpool’s front-footed system, and the Kop clearly appreciated it. “Just after we scored the fourth, I’d won a couple of tackles and to hear them sing your name is always nice, especially [from] the Kop, the noise they make,” he said after the game.

“It started getting going and it gives you goosebumps; I can’t thank them enough for the support they’ve shown me from day one.”

Robertson has benefited from a slow build at Liverpool, and serves as an example of why players cannot be panned too early.

This is a pertinent issue given Klopp’s new-found belief in Karius as his No. 1 goalkeeper, and this season’s rejuvenation of Robertson’s competition at left-back.

In the buildup to Sunday’s victory, Klopp was buoyed by the return of Moreno to full training at Melwood.

The Spaniard had been sidelined since the 7-0 victory over Spartak Moscow in the Champions League in December, limping off just before half-time and missing the next 10 games.

Moreno was left out of the matchday squad against City, instead taking his place behind the dugout alongside the likes of Danny Ward, Virgil van Dijk and Jordan Henderson.

But the 25-year-old can be expected to return to contention for the trip to Swansea City on January 22, providing Klopp with a selection quandary.

Though the prospect of Moreno even remaining at Anfield beyond the summer transfer window was considered futile before the start of the season, he quickly re-established himself as a key cog.

In the first four months of the season Moreno played over twice the amount of minutes (1,728) as he had in the entirety of the previous campaign (835).

And deservedly so, too, producing a series of stellar displays that earned a recall to the Spain squad for the November international break after a three-year hiatus.

Klopp will likely ease Moreno back into the fold, but there is no guarantee he will reclaim his spot ahead of Robertson.

That this is even a likelihood worth considering is remarkable given Liverpool’s long-term struggle for stability at left-back since the days of John Arne Riise.

Though Klopp’s waiting game hasn’t been as drawn out as Reds supporters’, this patience has now provided the club with two strong solutions to what had been their major weakness.