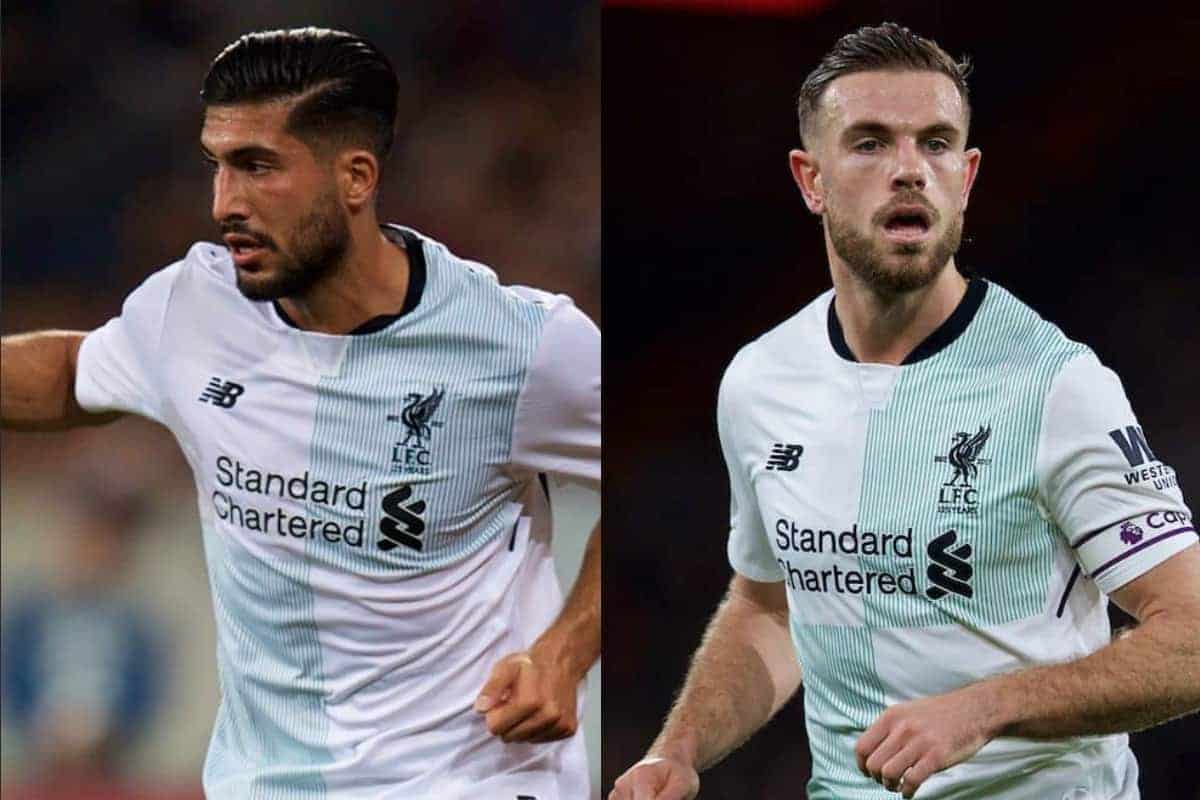 Liverpool captain Jordan Henderson is nearing a return to availability for Jurgen Klopp, but statistics suggest Emre Can should keep his place.

Henderson is back in full training at Melwood and could be part of Klopp’s squad for Monday night’s away clash with Swansea City in the Premier League.

The midfielder has been absent since the Reds’ 3-3 draw with Arsenal on December 22, missing the last five games with a hamstring injury.

Prior to that, Henderson had started in 21 of his 23 appearances this season, with Klopp ignoring outside criticism and keeping faith in his man with the armband.

However, given Can’s form in the No. 6 role during the 27-year-old’s spell on the sidelines, his place in the starting lineup should not be guaranteed.

Can has started in each of those five games in Henderson’s absence, building on a series of resolute defensive displays that have seen him outshine his English counterpart:

And as This is Anfield debate contributor Patrick Ambachtsheer (@Patrickkk1997) further underlined, Can has been particularly clinical with his tackling in recent weeks:

Can’s outshining Henderson numerically does come having played more minutes, but the difference between the two (1,437 to 1,273) is marginal.

Furthermore, given Klopp’s demands on his No. 6 stretch beyond simply breaking up play and finding a team-mate with a simple pass, it is notable that Can also has more assists (three to one).

The 24-year-old is in excellent form as the Reds continue their long unbeaten run in January, and it can be argued that Henderson is kept out of the side at his expense moving forward.

There remain doubts over Can’s long-term future at Anfield, though, with the ex-Bayern Munich youth attracting interest from Juventus and Borussia Dortmund as his Liverpool contract runs down.

But speaking to Sky Sports on Friday, he insisted he was still focused on fuelling Klopp’s top-four push in the second half of the season.

“The rest is down to my agent, and I’m just responsible for performances on the pitch.

“Of course, if I have a contract I will always give my best, or I will try to give my best.”

At present, Can is an invaluable player for Klopp, and ahead of Liverpool’s trip to the Liberty Stadium he should remain part of the 50-year-old’s starting lineup ahead of Henderson.